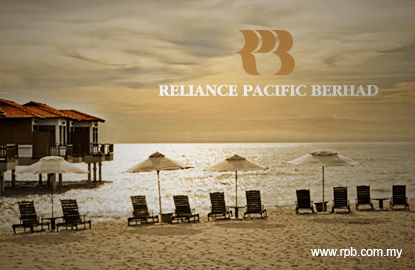 KUALA LUMPUR (Sept 23): Tour operator Reliance Pacific Bhd, which is also involved in property development and the hotel business, is looking to launch some RM210 million worth of properties in the first quarter in 2016.

This includes the first phase of the Admiral Hill project in Port Dickson, Negeri Sembilan, which carries a gross development value (GDV) of RM140 million, and Zone 2 of Desa Impian in Bandar Tenggara, Johor, which has a GDV of RM70 million.

"Ringgit has weakened about 30% since June. Foreigners will pay less when they purchase the units," she said, adding that the company is waiting for the approval of the development order.

The Admiral Hill project at Port Dickson has a total GDV of RM260 million. The first phase of Admiral Hill comprises 92 units of single storey villas.

The remainder phase two — a clubhouse — and phase three, comprising high-rise villas, will make up the remaining RM120 million GDV.

The entire project is part of the RM700 million Admiral Cove project, which Reliance Pacific is jointly developing with Keretapi Tanah Melayu Bhd.

As for Zone 2 of Desa Impian, Johor, it comprises 148 units of double and single storey shop offices. Desa Impian is an integrated township in Bandar Tenggara, Johor.

For its hotel business, Tan said it tends to do well with the weakening of the ringgit as there will be more foreign tourists visiting and more corporations willing to spend locally.

But Reliance Pacific is mindful of the current challenging business environment and will be undertaking several rationalisation measures to improve cost efficiency, said Tan.

Tan said the financial year ending Mar 31, 2016 (FY16) will "not be exciting" for the tourism business, but with the rationalisation exercise and better utilisation of manpower, the company is hopeful of achieving a better performance.

"Despite the challenges, we are tapping existing opportunities to improve our business," she said.

The tourism business contributes 60% of its revenue, while its hotel and property development businesses contribute the remaining 40%.