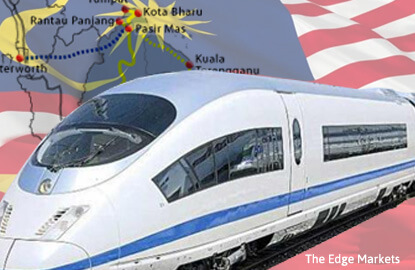 +A
This article first appeared in The Edge Financial Daily, on November 3, 2016.

KUALA LUMPUR: Opposition members of parliament (MPs) have questioned several aspects of the RM55 billion East Coast Rail Line (ECRL) project, including pricing, alleged lack of transparency, and the need for the project.

“When it comes to [a] high value project like this, a few approval processes are usually applied to study [its] feasibility, namely the pre-feasibility study (PFS), feasibility study and final investment decision,” he told reporters at the Parliament lobby.

“These studies involve the estimation of passengers, ticket fares, costs and other considerations that show whether the project can be carried out without burdening the people.

“Questions like how much are the suggested ticket fares, what are the increments or revisions in the next 20-year period are matters that need to be clear before the government signs any contracts with the Chinese government,” he added.

Rafizi said Prime Minister Datuk Seri Najib Razak should table the three studies in Parliament before making any commitment to the Chinese government, adding that the opposition lawmakers would undertake their own PFS.

“We will [ask] professionals to come out with a PFS [of] our own and present it to the people in the next 30 days,” he said.

Rafizi also said that Putrajaya is expected to set up a special purpose vehicle to take up the RM55 billion soft loan from the Export-Import Bank of China.

“This way, the MoF (Ministry of Finance) will own the SPV, and he (Najib) then does not need to seek Parliament’s approval, like what they did with 1Malaysia Development Bhd before,” he said.

On Monday, Treasury secretary-general Tan Sri Dr Mohd Irwan Serigar Abdullah confirmed to the local media that the ECRL project has been awarded to CCCC, and that the EPCC contract and a financing framework were among the agreements that he would sign during his visit to China with Najib.

Another lawmaker commenting on the project yesterday was Kuala Krai MP Dr Hatta Ramli who questioned the need for ECRL. He said the demand for rail services may not justify the huge investment, adding that the project appeared to be overpriced.

“The supply of rail services must be commensurate with the demand for it. From what I understand, the Kelantan people are demanding more [roads rather than railways],” said Hatta.

The ECRL is a double-track railway system connecting Kuala Lumpur to Tumpat in Kelantan, about 70km north of Kuala Krai.

Bayan Baru MP Sim Tze Tzin, on the other hand, queried the RM55 billion cost of the ECRL project, describing it as “the world’s most expensive railway system”.

He referred to the 377km Yichang-Wanzhou railway project in China which is dubbed “the most difficult rail project ever constructed in China”, mainly due to the difficult terrain in the south-western area of Hubei and the eastern part of the Chongqing municipality in the Wanzhou district.

“Even for a project like this, the cost per kilometre amounted to US$9.01 million, or RM36 million, as compared with RM92 million for ECRL, which is 250% higher,” he pointed out.

“As a measure of comparison, the 329km Ipoh-Padang Besar double-tracking project was awarded to MMC-Gamuda consortium for RM14.5 billion in 2003. More recently in December 2015, the 179km Gemas-Johor Baru link was awarded to China Railway Engineering Corporation for the sum of RM7.1 billion. On average, the railway projects cost RM44 million and RM39.8 million per kilometre respectively.

“However, at the cost of RM55 billion, the 600km ECRL will cost a monstrous RM91.7 million per kilometre to construct. That would mean that the ECRL will cost 108% and 130% more than northern and southern double-tracking projects respectively,” added Pua.