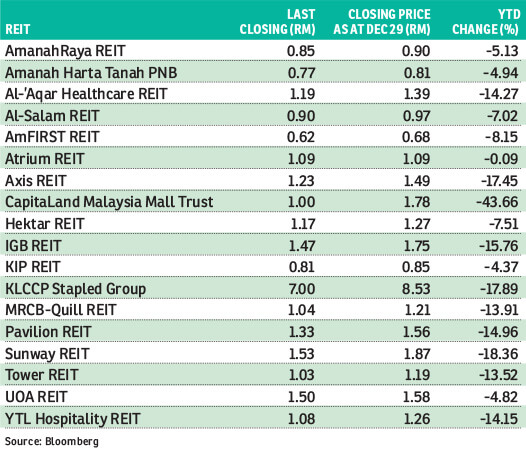 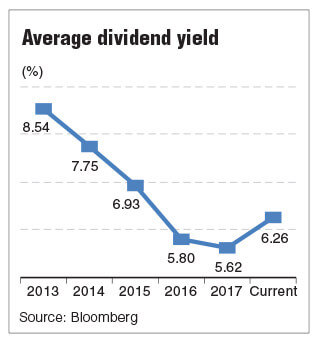 KUALA LUMPUR: Half of the 18 locally listed real estate investment trusts (REITs) saw a drop in their share price yesterday, raising average dividend yields again by another 0.12% to 6.26%.

“The selldown of these stocks should have been done [in the] earlier part of last year when a few REITs started to show weakness,” she said. “But after that, there seems to be no other additional weaknesses to warrant such a big selldown at this time of the year.”

The question now is whether the decision of US Federal Reserve (Fed) chairman Jerome Powell at the ongoing Federal Open Market Committee meeting would cause more REITs to slide on interest rate hike fears.

“Even if they decide on one interest rate hike today (yesterday), it is well expected. There is no reason for all the jitters in the market for REITs. [The hike] should have been priced in a long time ago, as the Fed has been guiding for at least three rate hikes since [former chairman Janet] Yellen was in charge,” said Vaz.

Hektar REIT and IGB REIT inched up one sen each to finish at RM1.17 and RM1.47 respectively. CapitaLand Malaysia Mall Trust — analysts’ top trading pick as selling in the counter is considered overdone — rose 1.5 sen or 1.52% to RM1.

The worst-performing REITS of the day were strong names Sunway REIT and Pavilion REIT, whose share prices dropped 3.16% and 2.21% to RM1.53 and RM1.33 respectively.

As the REITs’ prices fell, the average dividend yield grew from 6.14% to 6.26% within three days, widening the spread between the REITs’ yield and that of the 10-year Malaysian Government Securities.

However, Inter-Pacific Sdn Bhd head of research Pong Teng Siew cautioned that the rising dividend yields are not here to stay, given the market challenges and waning appetite among local and foreign investors.

“You would expect the REITs to fall out of favour eventually. Sure, the yields would go up when unit prices fall, but that is assuming the distribution per unit (DPU) will hold — which is not likely going to be the case,” he said.

Pong’s assumption is premised on the lingering oversupply concerns, especially in the retail and commercial property segments, which translate into lower occupancy rates and therefore eating into what investors should care most about — the DPU.

Additionally, foreign investors too are seeing less compelling reasons to invest in Malaysian REITs as yields on US assets start to climb. “It is difficult to make a case for more investments in that area,” he said.

MIDF Research, in a report yesterday, reiterated its “neutral” call on the REIT sector, due to the lack of imminent catalysts that will change the outlook for the sector.

The index — launched to attract more real estate players — has fallen 158.55 points or 15.66% since it was introduced in October.