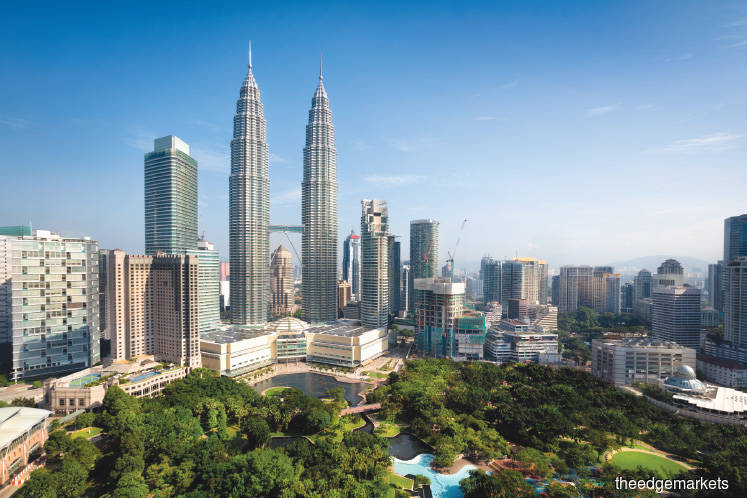 REITs typically offer shelter and outperform in market conditions where there is uncertainty and slowing growth because of their defensive attributes.

“REITs have a very low correlation to local benchmark indices such as the FBM KLCI and FBM70, and they have outperformed their benchmarks in four of the last five years [from June 2014 to July 2019]. That is before we talk about their average yield of 5%,” says Chow.

He was speaking at a recent media briefing on the investment bank’s market outlook for the second half of the year.

“M-REITs have had a very good dividend track record and most of them have reported higher year-on-year dividends. That has helped to drive their share prices,” says Chow.

REITs are also seen as an alternative play on falling bond yields. According to the investment bank’s July 22 note on M-REITs, the 10-year Malaysian Government Securities (MGS) yield had fallen sharply from 4.07% at end-December to 3.6%.

“The decline in the 10-year MGS yield was attributed to a confluence of factors such as declining global benchmark rates [due to the dovish stance of major central banks], the cut in Bank Negara Malaysia’s overnight policy rate (OPR) in May and stronger investor demand for defensive assets during economic uncertainties arising from the US-China trade tensions,” says Chow.

“REITs have been tracking the movements of the 10-year MGS yield [from July 2013 to July 2019] and they always trade at a spread. The current spread is about 150 basis points to the MGS, so they have not seen excessive compression despite the strong share price performance.”

He adds that based on the six M-REITs under the investment bank’s coverage, the historical share prices of the REITs have generally had a negative correlation with MGS yields, except in 2017 and 2018.

“At end-2017, there was some results disappointment from retail REITs, which reported a weak set of numbers. This affected their share prices. Also, investors were favouring cyclical stocks rather than defensive counters at that time, so REITs underperformed that year,” says Chow.

“M-REITs recovered strongly in the second quarter of last year, following better corporate earnings for this segment. That was when the market realised that the sector earnings is holding up better than expected and the share prices started to recover.”

Taking a cue from falling MGS yields, Affin Hwang Capital anticipates that market expectations of “lower for longer” global benchmark rates to rerate the high-quality M-REITs. “Following the OPR cut in May, we expect Bank Negara to maintain the rate at 3% throughout the year before lowering it in 2020, tracking lower global benchmark rates,” the investment bank says in the note.

M-REITs stand to benefit from an OPR cut, it adds. “A lower rate should translate into lower finance costs and benefit REITs with higher gearing [such as Axis REIT and Sunway REIT]. A lower OPR should also translate into lower MGS [yields] and is supportive of M-REIT valuations.”

However, while most investors are receptive of the investment bank’s “overweight” call on M-REITs, they have several concerns, says Chow. These concerns are the current oversupply in the property market; weak consumer sentiment and slower economic growth, which may weaken the occupancy rates of assets; low trading liquidity; and yield spreads that are not as attractive as those in neighbouring countries.

According Affin Hwang Capital’s note, while the firm concurs with investors’ observations about a supply glut and weakening consumer sentiment, it believes that quality assets at strategic locations and good tenant mixes will continue to outperform the broader market. “In these trying times, we recommend that investors be selective and stick to the winners,” the note adds.

On low trading liquidity, the investment bank says it expects higher investor interest to gradually increase the trading liquidity of the REITs. “We agree that current liquidity is low and recommend that investors focus on the relatively more liquid big caps,” the note adds.

On the M-REIT to MGS yield spreads, the investment bank says it expects the spread differential (between M-REITs and other REITs) to persist. “We note that the defensive Malaysian-listed companies and the market [FBM KLCI] generally trade at a premium to our neighbours due to the captive capital. Besides, the big-cap M-REITs have demonstrated consistent earnings growth, which is supportive of their premium valuations,” it adds.

Chow says that about half of all REITs’ assets are retail properties while a third are offices. He adds that in the current market environment, there is a preference to stick with REITs that have sustainable earnings.

“We prefer to sit with the winners and large caps than others. The top few malls — Pavilion Kuala Lumpur, Mid Valley Megamall, Sunway Pyramid and KLCC — have consistently enjoyed high occupancy rates despite the sliding occupancy rate in the Klang Valley,” says Chow.

“There has been an oversupply in the retail sector for a few years, but these malls have shown that they can maintain their yields and occupancy rates. And their earnings have been good. We do not see a shift from the current market dynamic and we like the big REITs with proven track records.”

Chow likes three M-REITs — KLCC REIT, Axis REIT and Sunway REIT. In Affin Hwang Capital’s note, KLCC REIT was picked for its defensive earnings while Axis REIT was selected for its sector-leading earnings per unit (EPU) growth in 2019E and high yields. “We also like Sunway REIT for its diversified asset base and yields. We are neutral on retail REITs [such as IGB REIT and Pavilion REIT],” he adds.

Investors seeking sustainable yields should look at KLCC REIT, even though not many are paying attention to it, says Chow. He points out that 74% of its earnings last year came from offices, although there is an oversupply of these properties.

“There is still a draw because 74% of its earnings are from triple-net and long-term leases to [companies such as] Petroliam Nasional Bhd (Petronas), Maxis and ExxonMobil. And these are really long-term leases,” says Chow.

“The first expiry that we will see is in 2026. That means the REIT is on very strong footing when it comes to earnings visibility. More importantly, the triple-net leases to Petronas and Maxis are subject to an upward rental reversion of 10% every three years.

“Also, its gearing ratio at 30% is far the lowest among the M-REITs under our coverage. Axis REIT, Sunway REIT and Pavilion REIT have gearing ratios of 35% to 38%.”

Chow says Axis REIT is for those looking for growth. The REIT has quite a diversified earnings portfolio as it has assets in the industrial, warehouse and office sectors, among others. “It has been doing well in terms of occupancy rates, having maintained these at more than 91% over the last few years,” he adds.

“Axis REIT is moving away from offices and has added warehouses and manufacturing facilities to help it buffer earnings. We think this long-term transformation plan is bearing fruit now and we expect it to grow. In fact, the REIT should see the highest earnings growth this year due to the full contribution of one of its plants, Axis Mega [Distribution Centre 1].”

According to the investment bank’s note, Axis REIT is offering sector-leading EPU growth of 7.6% and yield of 5.4% this year. The firm also favours Sunway REIT for its diversified portfolio, attractive yield of 5.3% and strong asset-injection pipeline from its parent, Sunway Bhd.

“While we expect the hospitality segment to see weakness in 2019/20, a stronger performance from Sunway Pyramid and positive contributions from the newly acquired purpose-built campus should more than offset the weaker hotel income,” says the note.

He expects Malaysia’s domestic demand to remain healthy and supported private consumption. “We think that going into 2020, the slowdown in exports may be cushioned the healthy domestic demand. And as reported, the country will benefit from trade diversion and trade substitution as a result of the US-China trade war in the short run. But in the long run, if the global supply chain disruption continues, we believe that all countries will be impacted the escalation of the trade war,” he says.

There are several reasons why the firm believes Malaysia’s economy can withstand a downturn if domestic demand continues to hold up, says Tan. One of them has to do with the increase in development expenditure.

Another factor is the mega-infrastructure projects. Tan says when the new government took over, it postponed and delayed some projects — such as the LRT3, MRT2 and East Coast Rail Link — and after renegotiation, it managed to save some costs. “Our expectation is that from here onwards, after the delay and postponements, the focus of the government will be to accelerate some of the infrastructure projects that will help provide support to the domestic economy through private investments.”

As a reflection of healthy private consumption, there have been pretty decent sales of passenger cars, he says. Meanwhile, tourism spending has remained relatively healthy, with a good number of tourist arrivals in the country.

According to Tan, Malaysia’s banking system is a lot stronger today than during the 1997/98 Asian financial crisis and 2008 global financial crisis, with very low non-performing loans. He says if the global economy were to go into recession next year, the country’s economic fundamentals and strong banking system would allow it to withstand the slowdown.