Reform does not have to cost votes 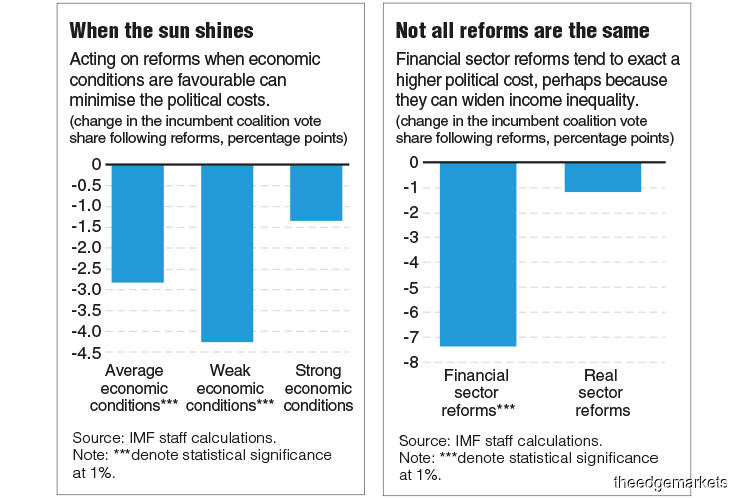 Economic reforms are often painful in the short term and hence unpopular, but does that mean reform-minded leaders always pay a price at the ballot box? Not necessarily, we learn in our analysis of structural reforms and election outcomes in 66 countries.

The question is timely, because the economic policy agenda in both advanced and developing economies is increasingly focused on structural reforms, amid persistently weak medium-term growth and limited fiscal space in many countries.

Policies that change the way governments work — known as structural reforms — range from reducing regulatory barriers to competition and opening trade and financial flows to increasing labour market flexibility. They are motivated by objectives that include raising productivity, investment, and employment and making the economy more resilient to shocks.

While there has been broad agreement on the economic benefits of structural reforms, the political impact is less settled. This is because reforms may generate gains for society as a whole only in the longer term while inflicting short-term pain on some sectors. Those affected may be highly vocal and well organised. When this happens, politicians may hold back on reforms for fear they will be penalised at the ballot box.

Our new research suggests that electoral costs associated with structural reforms can be avoided, or at least substantially lessened, if political considerations are factored into policy design. A key ingredient to make structural reforms work is strong ownership and enhanced dialogue with business and civil society.

We studied the economic and regulatory environment in 90 advanced and developing economies, focusing on indicators such as interest rate and credit controls, entry barriers, restrictions on external payments and receipts, trade tariffs, and employment protection, to name a few. Our data covers 1973-2014. We then examined electoral outcomes for each country in our study with fully democratic and open elections.

Our key finding based on 66 democratic countries is that, while on average reforms are associated with electoral costs, specific effects depend not only on the type of reform, but also on when in the electoral cycle it is implemented.

Specifically, reforms are generally benign or even favourable politically when implemented swiftly after elections so that governments can reap the rewards from the medium-term economic gains. Electoral risks are heightened when governments delay and enact reforms on the eve of an election, given short-term dislocation effects often wrought by reforms.

For example, a major reform just before an election costs the government coalition an average three percentage points in its share of the vote. By “major” reform, we mean reforms on the scale of those implemented in New Zealand in the mid-1980s and early 1990s, which included opening up to trade and financial flows, removing controls on interest rates, and reducing barriers to competition.

Because the effect of reforms tends to be magnified when growth is strong and because voters may not be able to distinguish between the effects of the reform and the results of underlying economic conditions, reforms do not seem to lead to political costs when enacted at times of robust economic activity. In contrast, reforms are more challenging politically under weak economic conditions.

Even when economic conditions are difficult, though, governments may be able to implement reforms without an electoral penalty. For example, the cases of Spain in 1979 and Peru in 1995 show that crisis periods often present unique reform opportunities that do not necessarily incur political costs. What it takes is strong ownership by leaders to build consensus in society that reform with stabilisation is unavoidable. In both cases, new governments instituted reforms during periods of slowing growth and high inflation and were returned to office with solid shares of the vote.

Finally, not all reforms are equal from an electoral perspective. The data suggests that those that engender increased income inequality — notably financial sector deregulation (such as banking sector privatisation and removing controls on credit and interest rates) and opening to financial flows under some conditions — can exact a higher cost at election time.

Making the case for reform

There is a pressing need and strong case for well-designed, appropriately timed, and carefully implemented structural reforms. This is especially true in emerging markets and developing economies, where deregulation has stalled in recent years. A major push for structural reform would mean significant output gains in the medium term in both advanced and developing economies.

But experience with past reforms highlights the need for careful design and prioritisation based on good communication and transparency to ensure broad-based support and alleviate the effect on those who will be most directly impacted — often the vulnerable groups in society.

Three lessons from our analysis

• First, governments should act swiftly following an electoral victory to carry out reforms during their political honeymoon period.

• Second, reforms are best implemented when economic conditions are favourable — that is, governments should “repair the roof when the sun is shining”.

• Third, policymakers should factor in any harm reforms may have on income distribution and take well-communicated upfront steps to offset such side effects. Strong social safety nets and active labour market programmes that help displaced workers find new jobs can help in this regard, given that reforms often mean simultaneous job creation and destruction.

Strong ownership by all stakeholders of the reform agenda, enhanced through dialogue to garner the support of businesses and civil society is key, especially when economic conditions are tough.

This article was first published in IMF Blog, a forum for the views of the International Monetary Fund staff and officials on pressing economic and policy issues of the day. The views expressed in this article do not reflect The Edge Financial Daily’s stand.