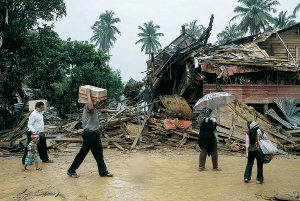 KUALA LUMPUR: The Malaysian Red Crescent Society (MRCS) will identify nine of the worst flood-hit villages in the east coast states of Peninsular Malaysia and “adopt” them under a rebuilding programme that will require RM4.5 million.

Under its “Kampung Angkat” (Adopt a Village) programme, the MRCS will allocate RM500,000 to each village, its chairman Tunku Tan Sri Shahriman Tunku Sulaiman said.

“Our three main priorities for these adopted villages are to provide clean water supply, temporary shelter and medical treatment for the flood victims,” he said at the MRCS headquarters yesterday.

Shahriman said so far, only one village has been confirmed on the society’s list of adopted villages and that is Kampung Pasir Tumbok in Gua Musang, Kelantan, one of the worst-hit states in the floods that began before Christmas Day last year.

The other eight villages for the programme will be identified and announced in two weeks’ time, Shahriman said.

The MRCS is still in the process of ascertaining the needs of various villages affected by the floods and will choose the remaining eight villages based on those suffering the worst damage, he added.

The plan is to help four villages in Kelantan, three in Terengganu and two in Pahang.

“So far, we had garnered a sum of RM3.2 million in cash. Therefore, we still need more donations from various sectors so that the amount will be sufficient for the Kampung Angkat project,” he said.

The floods were the worst Malaysia had experienced in recent decades, displacing more than 200,000 people in several states over the past few weeks and causing the new school term to start a week late. Although the flood waters have receded, the monumental task of cleaning up and rebuilding has only just begun. The government has estimated a loss of RM2 billion in terms of infrastructure losses. — The Malaysian Insider