TWO weeks ago, Sabah businessman Datuk Raymond Chan Boon Siew ceased to be a substantial shareholder of Naim Indah Corp Bhd (NiCorp) after selling 38.8 million shares, or just slightly above 5%, at 12.5 sen apiece, or a total of RM4.8 million.

Just before he exited NiCorp, Chan had also ceased to be a substantial shareholder of Harvest Court Industries Bhd after selling 3.7 million shares, or a 5.4% stake, at an undisclosed sum.

The quiet sell-out from the two companies, previously regarded as his flagships, is seen as Chan’s exit from corporate Malaysia, and an end to the short but notable track record of the “man with the Midas touch” in the local stock market.

Market talk that Chan was in a bind has been going round for some time now, although he was still in the news a few months ago due to a heated dispute with another Sabahan, Datuk Eddie Chai, for control of Harvest Court.

On Chan’s exit, one market watcher who knows him says, “I doubt he can bounce back, the partnerships are no longer there.”

A former business associate remarks that “he (Chan) has definitely seen better days”.

Another former associate declined to comment, saying it is “not good to kick somebody when he is already down…”.

Chan could not be contacted for comment for this article.

Chan first made the news when his private vehicle, Sagajuta Sabah Sdn Bhd, attempted a reverse takeover of Jerneh Asia Bhd in mid-2011. However, the deal didn’t pan out.

What thrust Chan into the corporate limelight was when he managed to get Nazifuddin to join the Harvest Court board in October 2011. Nazifuddin went on to acquire four million shares, or a 2.2% stake, in the company in November 2011.

With the entrance of the duo, Harvest Court’s share price shot up from below 20 sen to RM1.50 within a short while.

However, Nazifuddin resigned less than a month after he joined Harvest Court’s board. Market talk was that the meteoric rise of stocks linked to Chan was attracting unwanted attention to him as the prime minister’s son.

Since then, Nazifuddin has disassociated himself from Chan.

He became a household name in the local stockbroking fraternity on one particular trading day in 2012, when Metronic, Ariantec and NiCorp contributed to 60% of the total market turnover of 3.8 billion shares on Bursa Malaysia.

“The initials RC [Chan’s initials] linked to any stock would send its price skyrocketing,” explains a market watcher.

In an interview with The Edge in March 2012, when asked where NiCorp would be in three or four years, Chan had replied, “I hope it will be a big-cap stock. That is my aspiration.”

At the interview, he also said, “One thing for sure, any counters that I invest in, I stay committed to drive the business to another level. A lot of people underestimate penny stocks. Not all penny stock counters are weak.

“We are not fly-by-night businessmen,” he added.

In his office in Bangsar back then, several bottles of Remy Martin Louis XIII — among the top Cognacs in the world — were on display, as well as Cuban cigars, top-of-the-line Cohiba, loosely placed on a table.

However, word of Chan faltering soon hit the market, and RC no longer had the same pulling power.

More recently, in the middle of this year, Chan had a falling out with two fellow Sabah businessmen — Chai and Datuk Kenneth Vun.

In a filing to Bursa by Harvest Court in June, Chan alleged that Chai and Vun had accumulated more than 33% of Harvest Court, and attempted to circumvent the general offer rules. In response, Vun denied being a shareholder of Harvest Court while Chai said he had less than a 20% stake.

Chan, however, said he had a recording of Chai making such claims. Chan and Chai had then sued each other in court, and sent letters to Bursa calling for an investigation into the other party’s claims.

Following the fracas, Chan was not re-elected as a director of Harvest Court and vacated his managing director role in June this year.

At NiCorp, he opted to become a non-executive director in mid-August, stepping down from his position as CEO. A new group headed by Datuk Alex Siaw Swee Hin has since taken over.

Despite the roller-coaster ride in the companies’ share prices, Chan had little to show in terms of the earnings of the listed companies he once controlled.

As for NiCorp, the company last posted a profit in Q42011, before Chan came in. For the six months ended June, 2014, NiCorp had bled RM1.4 million in losses from RM1.7 million in revenue.

Chan’s main asset was Sagajuta Sabah, which he was attempting to divest via a reverse take-over. It is not clear if he is still in control of the company as filings with the Companies Commission have not been updated.

Interestingly, when asked how many vehicles or companies he was looking at during the interview with The Edge, he had replied, “I don’t know, I won’t be dictated by numbers, business is fluid, [I] look for the opportunity. Look at Warren Buffett, look at Li Ka Shing … they own more than 100 companies … it’s business.” 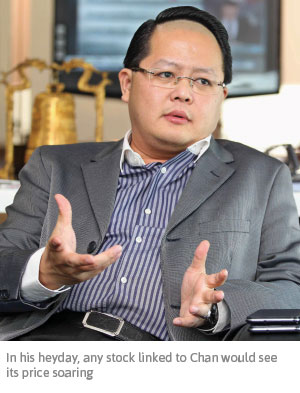