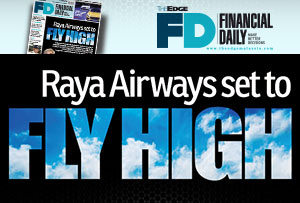 KUALA LUMPUR: Raya Airways Sdn Bhd, the restructured entity of Transmile Air Services Sdn Bhd (TAS), formerly a wholly-owned subsidiary of Transmile Group Bhd whose RM530 million accounting fraud was the biggest corporate scandal in mid-2007, is going through a major strategic transformation in a bid to shake off its old image.

In an interview with The Edge Financial Daily, Raya Airways commercial director Lee Shashitheren said the air cargo carrier will invest US$180 million (RM586.8 million) in a fleet-renewal programme and new warehouses, retrain pilots and increase its manpower in the next three to five years.

Lee said with the fleet-renewal exercise, Raya Airways will replace three of its ageing Boeing 727-200s that have a cargo capacity of 22 tonnes with four larger 757-200s, which are able to carry loads of up to 32 tonnes, by year-end.

“Previously the company owned 12 freighters, although only six were operational. Of this, three are being used at the moment,” he said.

He said the time is ripe for Raya Airways to change the public perception of the carrier, starting with a new name and its official launch by year-end.

Lee explained that the name Raya Airways was chosen to give an “air of ease”, in which the word “raya” depicts large and often represents a “happy” connection to celebrations.

“The rebranding exercise is not just a make-up. It is a new beginning [for the carrier] ... to remove what’s bad and move on. It is a long process that requires a lot of approvals, for example, to change our name.

“It involved working with various authorities such as the Department of Civil Aviation, the Transport Ministry, the International Civil Aviation Organisation and other airports that we are conducting business in.

“Thankfully [the name change] has been done and we have a good team to start afresh,” he said.

Lee said the new shareholders had managed to turn the carrier around 14 months after taking over TAS.

The anomaly in the figure where the profit weighed higher than the revenue could be an accounting treatment, which occurs when there are extraordinary items such as tax write-backs.

“At the time the private entity was taken over, TAS was losing about RM2 million a month but we are achieving a net profit now,” said Lee, adding that the carrier’s gross profit margin now hovers between 7% and 8%, higher than the airline industry’s average of 3%.

“We have cut many unprofitable routes. The ones we are servicing now are all profitable. We also lease our aircraft for private charters by companies that want their goods sent immediately to a certain destination,” Lee said.

If the plans go accordingly, Raya Airways hopes to one day be the No 1 air cargo carrier in the country, and perhaps redeem the title of the “darling of the local aviation industry”.

The fall of Transmile
KUALA LUMPUR: Once a high-flying company with rosy prospects, Transmile Group Bhd fell from grace in mid-2007 when a shocking accounting fraud in overstating profits of up to RM530 million was discovered in the air cargo firm.  Malaysia’s richest man Robert Kuok was one of its major shareholders.

The red flag was raised in May 2007 when Transmile Group told Bursa Malaysia that its audited accounts could not be finalised due to the absence of “relevant supporting documentation from the management on certain transactions”.

What ensued were findings by special auditor Moores Rowland Risk Management Sdn Bhd, which suggested that Transmile Group had actually swung to losses in the financial years 2005 and 2006 despite its management having reported the group’s profits during those years.

Amid the widespread media coverage on the corporate scandal, Transmile Group’s then founder and chief executive officer Gan Boon Aun, together with several key executives, left the group while regulators dug deeper into a string of irregularities of its accounts.

Transmile Group’s board of directors lodged a report with the police and the Securities Commission Malaysia over the false statements and documents in relation to its revenue, property, plant and equipment, and payments to third parties as reported by Moores Rowland.

On Feb 23, 2010, Transmile Group was classified under Practice Note 17 as its shareholders’ equity on a consolidated basis as at Dec 31, 2009 fell below RM40 million, which was less than 25% of its issued share capital.

This article first appeared in The Edge Financial Daily, on October 7, 2014.