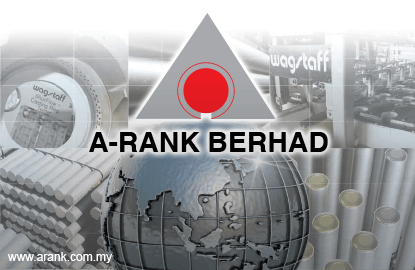 KUALA LUMPUR (Sept 28): Aluminum billets manufacturer A-Rank Bhd saw its net profit for the fourth quarter ended July 31, 2015 (4QFY15) climbed 32.8% to RM3.98 million from RM2.99 million a year ago, due to the overprovision of deferred taxation in prior years.

However, A-Rank announced to Bursa Malaysia today that its revenue for the quarter fell 6.4% to RM115.48 million from RM123.35 million in the same corresponding period.

In the filing to Bursa Malaysia, the company explained that the decline in revenue was due to lower business volume although average selling prices were higher as a result of the increase in raw material cost.

A-Rank has proposed a first and final single-tier dividend of 2.25 sen per share, amounting to RM2.7 million, for FY15.

A-Rank said the volatility of aluminum prices and weak ringgit has had adverse impacts on its profit margins and the increase in natural gas pricing from July 1 has also added further pressure to margins.

"Nonetheless, the group will remain vigilant and be well-prepared for the volatilities and challenges ahead. As usual, we will continuously focus on improving cost efficiencies and recovery to mitigate any adverse impacts on our business," it added.

Barring unforeseen circumstances, the company said it is "optimistic" about remaining profitable for the forthcoming quarter.