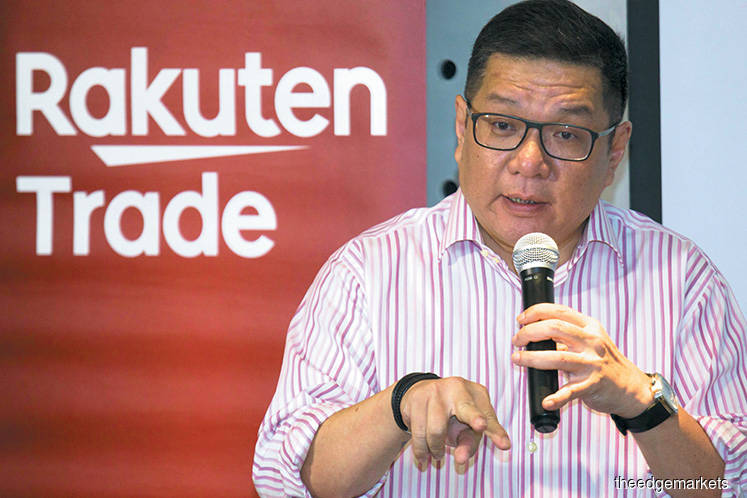 Yee sees the return of previously shelved projects — the East Coast Rail Link and Bandar Malaysia — as encouraging for the construction sector. Photo by Patrick Goh

The target is based on 16 times its market price-to-earnings ratio (PER), Rakuten Trade head of research Kenny Yee told a media briefing on the market’s outlook for the second half of this year.

“Over expectations of rate cuts by the US Federal Reserve (Fed) may and will derail market sentiments,” Yee said, adding that the Fed’s recent 25 basis point (bps) cut has failed to inspire any buying, as the market had anticipated a 50bps cut.

Domestically, Yee said a weakness in corporate earnings is dragging the already-battered KLCI. The benchmark index closed 1.01% or 16.35 points lower at 1,610.41 yesterday. Year to date, the KLCI has retreated 4.74%.

The research house is now expecting corporate earnings to contract 0.5% this year — versus its earlier projection of a 2.3% growth — mainly due to a weaker plantation sector.

The plantation sector is now expected to contract 11.9% compared with 8% previously, due to external factors including the European Union’s boycott of palm oil, and also as the trade of the edible oil remains affected by negative sentiments due to the US-China trade conflict, Yee added.

Nevertheless, the market could see a reversal in foreign flow after a net outflow of RM16.4 billion between January 2018 and Aug 2 this year.

Yee also expects foreign funds to take advantage of a cheaper ringgit and a reasonable valuation of the KLCI moving forward.

Hence, he is more optimistic about next year’s outlook, expecting the KLCI to rebound to the 1,800 level, supported by an anticipated 6.1% growth in corporate earnings as well.

“Index-linked blue chips are ripe for the picking as most are under-owned by foreign funds and many are now trading at reasonable levels.” The KLCI is currently trading at 15.5 times the PER, compared with its historical 18 times, he added.

These mega infrastructure projects’ revival is a major catalyst to capital inflow from China too — positive for the ringgit, Yee added.

He is expecting the ringgit to strengthen to 4.0 against the US dollar this year. At the time of writing, the local note was trading at 4.1775 against the greenback, after weakening 0.47% from the previous close of 4.1580.