Rafidah hits out at narrow minds opposing wider use of English 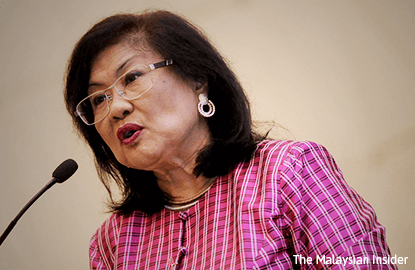 (Nov 27): Malaysians must not allow narrow perceptions under the guise of nationalism to come in the way of learning English in order to compete globally, said former minister Tan Sri Rafidah Aziz today.

She said communicating in good English or any other foreign language would not make one any less Malaysian, and urged politicians not to politicise the issue.

"We need to nurture Malaysians with global exposure and who can compete globally. Please do not jeopardise the future of our young and the future of Malaysia by continuing to make education and language political," she said in a Facebook posting.

"We must not be so parochial about language. We must not allow narrow perceptions to prevail under the guise of nationalistic spirit 'semangat kebangsaan'.

"It does not make anyone less Malaysian if he or she can communicate well in English or any other language, for that matter."

Rafidah said she shuddered every time language and race issues were used by politicians and "would-be" politicians.

"But we are living in a dynamic, highly competitive and knowledge-based world. Not keeping in pace will render us being left far behind. We need our young to also be competent in communicating in other languages that are relevent... English, Mandarin, Japanese.

She said she did not become less of a Malay despite being educated entirely in English.

"I also did French. I did not become less Malay.

"In fact, I was able to do my little bit for my country, because I could interface with anyone out there by being able to speak and effectively communicate everything in English," the former international trade and industry minister said.

"Certainly no one else could be more nationalistic than our founding fathers who made us 'merdeka'?" – The Malaysian Insider