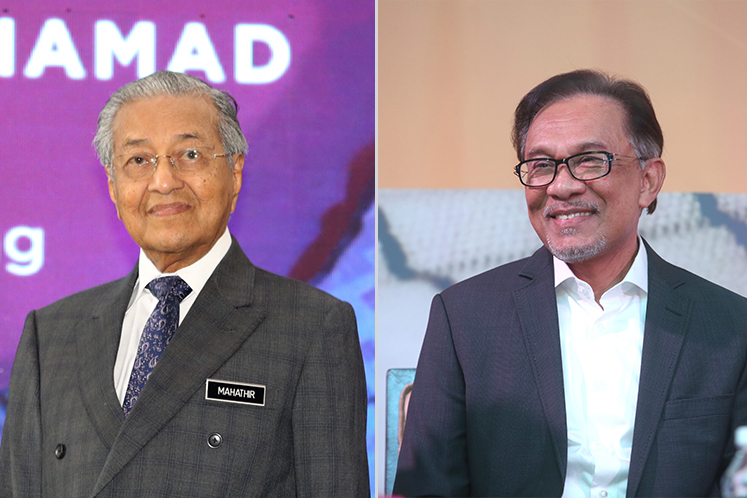 (Feb 26): In Malaysian politics, two figures have long played a crucial role: Mahathir Mohamad, who has ruled the country for almost a quarter century, and Anwar Ibrahim, who has perpetually waited to succeed him.

Now the two are facing off head to head as both seek to corral enough lawmakers to form a majority in the 222-seat parliament. Mahathir said Wednesday he’ll return to power if enough lawmakers support him, while Anwar said he’s “confident” his camp has the numbers to form the next government.

More than 48 hours after Mahathir resigned and threw Malaysia into turmoil, it’s still uncertain who will emerge victorious. The king, who plays a largely ceremonial role in Malaysia’s British-style system of Government, has been meeting lawmakers from all sides to help him determine who has the support of the majority. It’s unclear when he’ll make a decision.

If Anwar, 72, emerges as Prime Minister, it would mark yet another twist in his decades-long rivalry with the 94-year-old Mahathir. The distrust between them dates back to the 1990s, when Anwar was ousted from Mahathir’s Cabinet and arrested for sodomy.

Anwar had been in line to take power from Mahathir after the two joined together in the Pakatan Harapan coalition to win the 2018 election, ousting the Barisan Nasional alliance that had ruled for six decades. Yet Mahathir repeatedly delayed handing over power, prompting divisions within the ruling bloc to fester — eventually leading to its collapse this week.

The political turmoil has cast a pall over a slowing economy that reported its worst growth rate since 2009, and hampers its ability to mitigate the impact of the coronavirus outbreak and trade wars. Malaysia’s ringgit reached the lowest level in more than two years.

On Wednesday, the former ruling Pakatan Harapan alliance — minus Mahathir’s party — agreed to propose Anwar as Prime Minister to the king. In a statement, it said Mahathir refused to attend a meeting to revive the coalition.

“Right now all activities should stop and we should await the king’s decision, which must be respected and obeyed by all parties and people in this country,” Anwar told a press briefing. In another positive sign for Anwar, an alliance of regional parties on the island of Borneo crucial to tilting the balance in Parliament said it would abide by any decision made by the King.

But Mahathir can never be ruled out. The Finance Ministry announced that he would unveil a stimulus package on Thursday, implying he would still be in office.

In his first public comments since his resignation, Mahathir said he stepped down to dispel criticism that he was “power hungry” and would return if a majority lawmakers supported him. He said he resigned because he wouldn’t accept the United Malays National Organisation, his former party that long ruled the country, forming an alliance with his Bersatu party.

“If allowed, I will try to have a government that doesn’t side with any party,” Mahathir said. “Only the country’s best interests will be prioritized.”

Mahathir’s advanced age might help him among Members of Parliament who are deciding who to support, according to James Chin, a Malaysian academic and a political analyst who heads the Asia Institute at the University of Tasmania.

“It’s all about self-interest,” he said. “If you were an MP why would you want to select Anwar? He might be there for 10 years.”