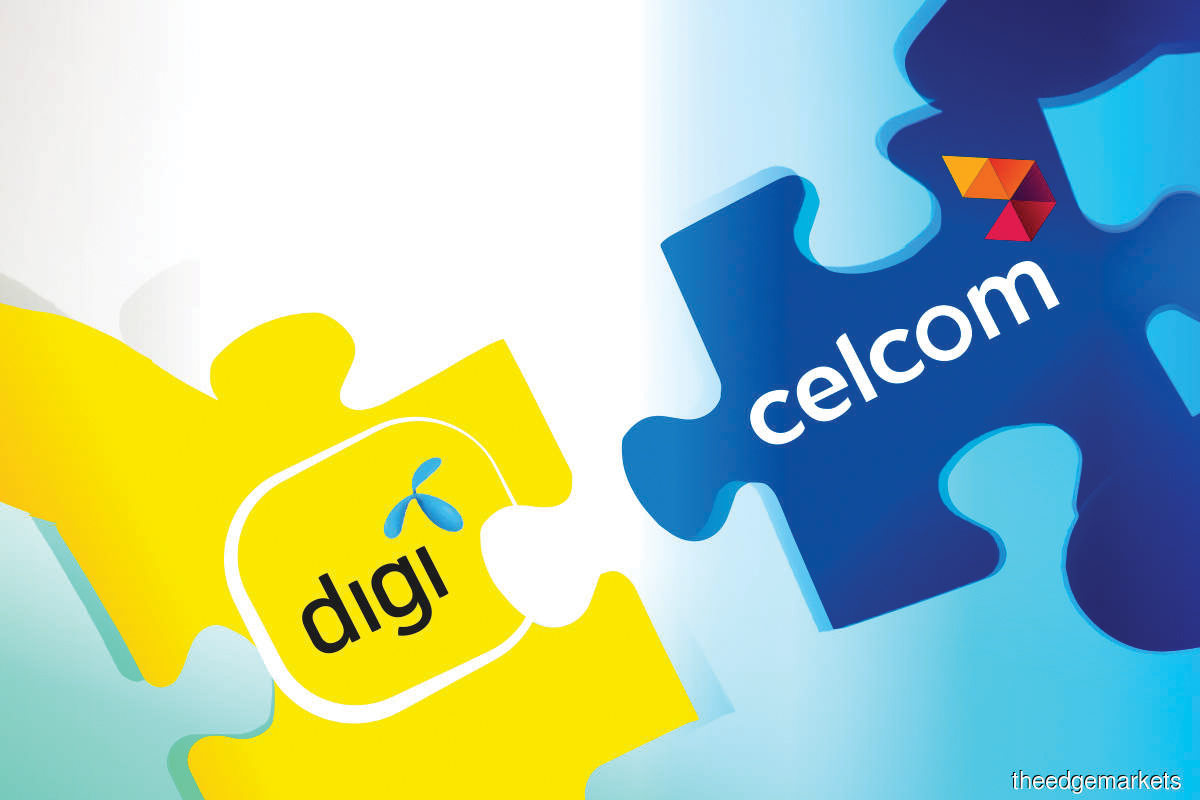 REGIONAL telecoms players Axiata Group Bhd and Norwegian Telenor ASA moved closer to jointly controlling the country’s largest telecoms operator with the signing of a definitive agreement to merge their respective Malaysian mobile units — Celcom and Digi.Com Bhd — on June 21. The real race to the finish line, however, had only just begun.

While the promoters say the merger — which still needs regulatory as well as shareholders’ approval — is expected to be completed by the second quarter of 2022, it is understood that efforts are underway to close the deal early as year-end to start reaping as much as RM8 billion worth of synergies (over five years) and avoid losing good talent or market share to rivals.

“The competition is not going to sit and do nothing … The longer [uncertainties surrounding the merger] drag on, the more synergies could be lost,” a source familiar with the goings-on say. When the non-binding deal was announced on April 8, Axiata’s initial guidance to the market on timeline for completion was “seven to nine months” from the signing of the definitive agreement. Both parties only took a little over 10 weeks to complete due diligence and negotiations on the definitive agreement, within their guidance of one to two months.

“We do not anticipate the Malaysian Communications and Multimedia Commission (MCMC) offering a dissenting opinion as the overall construct of the merger is positive for the industry and market dynamics,” RHB Research telecoms analyst Jeffrey Tan tells clients in a note dated June 22, noting that the guided merger synergies of RM8 billion over five years “appears to be ahead” of market estimates of between RM5 billion and RM7 billion.

Still, as an Axiata minority shareholder aptly pointed out during its recent annual general meeting, what’s important is if and when these multi-billion-ringgit synergies would translate into higher dividends for shareholders.

Axiata president and group CEO Datuk Izzaddin Idris has said the merger does not derail the trajectory of the group being able to shore up dividends per share to the 20-sen level by FY2024 from seven sen in FY2020, figures which imply yield potentially moving from 1.8% to 5.2% in about three years based on Axiata’s RM3.87 close on June 24. Izzaddin’s current contract is for three years, just like the initial tenure of his predecessor Tan Sri Jamaludin Ibrahim, who stayed 12 years before retiring at the end of 2020.

So far, Axiata has downplayed prospects of special dividends, both in its briefings as well as its announcement to the stock exchange. The RM2 billion cash it stands to receive from Digi.Com (RM1,692,733,818) and Telenor (RM297,918,107) have been earmarked for future investments within three years (RM1 billion), with the rest (RM890.652 million) going to repay borrowings after defraying merger expenses (RM100 million), according to Axiata’s announcement dated June 21.

While Axiata would be able to recognise a RM13.29 billion one-time net gain from the disposal of 100% of Celcom for RM17.76 billion (RM1.99 billion cash and 3.88 billion new Digi shares issued at RM4.06 each), utilising the larger share reserves for special dividends or capital repayments in future are still subject to the availability of spare cash.

That said, there is a chance for higher dividends if conditions permit after the merger closes. Axiata also stands to receive RM2.4 billion in repayment of loans granted to Celcom within six to 12 months of completion of the merger. Based on its current share base of 9.17 billion shares, Axiata only needs about RM1.8 billion to pay a dividend of 20 sen per share.

It would seem that carrots are already being dangled to get buy-in for the deal, where institutions like the Employees Provident Fund (EPF) and Permodalan Nasional Bhd’s flagship fund Amanah Saham Bumiputera (ASB) hold substantial stakes in Celcom’s seller as well as buyer-cum-merger-partner. The EPF and ASB hold a 17.17% and 14.92% stake respectively in Axiata as well as a 14.92% and 7.73% stake respectively in Digi (current/pre-merger 7.775 billion share base).

“Assuming a smooth transition, post-integration period, we are expecting to see improvement in Ebitda (earnings before interest, tax, depreciation and amortisation) and cash-flow margins in the combined entity in step with our ongoing commitment to maximise dividend payout for our shareholders,” Izzaddin says in a statement.

Commitment aside, what’s important is the sustainability of that 20- sen level beyond one or two years — especially with Axiata only owning 33.1% of the merged entity (Celcom Digi Bhd) compared with 100% of Celcom, which contributes about a quarter of Axiata’s Ebitda.

Izzaddin had previously noted that Axiata would be holding a smaller stake in an enlarged entity that enjoys significant cost savings from cutting duplications.

Going by the number of new shares to be issued to Axiata (3.88 billion) and Telenor (73.38 million) to make them equal partners in the MergeCo, the MergeCo would need about RM1.76 billion to keep dividends at 15 sen per share — about RM0.6 billion more than RM1.17 billion under Digi’s existing share base of 7.775 billion.

Another simplistic working shows that a 33.1% share of the merged entity’s FY2020 proforma profit after tax of RM1.9 billion is about 8%, or RM55 million short of 100% of Celcom’s FY2020 profit after tax of RM677 million, which was lower than RM789 million in FY2019 due to rationalisation-related costs. Still, analysts reckon the cash flow from Celcom and potential cost savings from the merger should help make up the difference.

“Post-merger, the deconsolidation of Celcom may cause Axiata to shave off 4% from 2023 EPS of 14.9 sen/share. That said, potential cost savings of an annual RM500 million to RM1 billion can lift Axiata’s 2023 EPS by 6% and 15% respectively, based on Axiata’s 33.1% associate stake in the MergeCo,” UOB Kay Hian Research analysts Chong Lee Len and Chloe Tan Jie Ying write in a note dated June 22.

While a lack of control over a key cash-flow generator post-merger is a valid concern, both Axiata and Telenor are expected to continue nudging for dividend payments from the merged entity.

Telenor — which will also be deconsolidating Digi from its books with its holdings in the merged entity diluted to 33.1% from 49% currently — lists “attractive shareholder remuneration with commitment to year-over-year growth in ordinary dividend” as among the investment cases for the Oslo-listed entity, which is 53.97%-controlled by the Norwegian government. Indeed, Telenor has increased its ordinary dividend per share every year since 2009, data on its website shows.

Digi’s dividend payout has exceeded 98% of earnings at least in the past five years, above its dividend policy of distributing at least 80% of net profits and delivering strong and sustainable returns to shareholders. Telenor’s 49% share of the RM1.21 billion dividend (RM594.3 million) that Digi paid out in FY2020 (15.6 sen per share or between 3.6 sen and 4.2 sen per quarter) is roughly one-tenth of the NOK12.3 billion (RM6.02 billion) in dividend that Telenor paid its own shareholders in FY2020, its annual report showed. For FY2019, Telenor’s share of dividends from Digi (RM693.35 million) likely covered close to 12% of Telenor’s NOK12.1 billion (RM5.92 billion) dividend payout, our back-of-the-envelope calculation shows — an indication of the significance of sustaining dividend flow from Malaysia post-merger.

Apart from the MergeCo, Axiata had previously guided that the group would also see dividends from its units in Nepal, Sri Lanka and Cambodia, while its units in “growth markets” like Indonesia and Bangladesh, which do not currently contribute much dividend, should have their own funding capabilities.

Investors, who deem investments in countries like Nepal and Bangladesh to be of higher regulatory risk than Malaysia, already want greater assurance that can come from more sustainable dividend payments — with or without the proposed merger, an observer says.

Incidentally, sustainability and the scale to deliver both investments on quality of service alongside decent returns to shareholders are the strongest arguments for the proposed Celcom-Digi merger.

Much depends on how the MCMC views market dominance, specifically if it agrees with critics that the merged entity serves 40% to 50% of subscribers and could gain an unfair advantage over rivals. “From Big Three, it would be a duopoly even if there are still three [large] brands,” one observer says.

Based on numbers disclosed by the MCMC as well as Axiata, Digi and Maxis, the combined entity would have some 43.3% of the 44.43 million total mobile subscription as at end-March 2021 — 45.4% of total postpaid subscribers and 38.7% of total prepaid subscribers.

Maxis, on the other hand, would have between 22.7% and 25.6% of total mobile subscriptions with the remaining one-third in the hands of other players, including unlisted U Mobile and Yes, a back-of-the-envelope calculation shows.

The MCMC only provides the total number of subscriptions but no longer publicly discloses a breakdown of subscriber base according to operators in its quarterly statistical releases on its website. Revenue and profit figures for the entire industry were not immediately available.

If one only compares revenue and profit figures among the Big 3, the rough split of 42:58 between Maxis and the MergeCo shows that Maxis remains a formidable player.

The fact that the government is pushing to cut network duplication by awarding 5G spectrum to a single government-owned entity — Digital Nasional Bhd — is another plus sign for merger proponents, who argue that there is no single dominant player, an observer says. “Savings from cutting duplication [as Celcom and Digi consolidate their network and rationalise equipment] would be reinvested in the industry and less money will flow out [to foreign equipment vendors].”

Proponents of the merger would likely only breathe easier once regulatory approval is in hand, even if they reckon the proposal has its merits.

At the time of writing, analysts polled on Bloomberg are more bullish on Axiata — with 17 “buy” calls versus only five “hold” calls — the most bullish target price being RHB’s RM4.75, which implies 22.7% upside potential at its RM3.87 close on June 24 and 44 sen or 10% above the consensus target price of RM4.31.

That compares with only five “buy” calls, 14 “hold” calls and three “sell” recommendations for Digi, according to Bloomberg data at the time of writing. Still, those who want greater clarity on dividend certainty as well as prospects for more value being unlocked at Axiata would likely choose Digi, where valuations would likely continue to boil down to dividend certainty. Its debt levels would likely be watched alongside cash flow to gauge the sustainability of its dividend stream.

RHB is also the most bullish on Digi, with a RM4.78 target price implying 11% upside potential from its RM4.30 close on June 24 on top of around 4% yield. “We lift our target price to build in cost synergies and higher net debt. Downside risks are lower-than-expected synergies to be realised and execution [risks] of the merger process,” RHB’s Tan writes in a note dated June 22 as he upgraded Digi to a “buy” from a “neutral”.