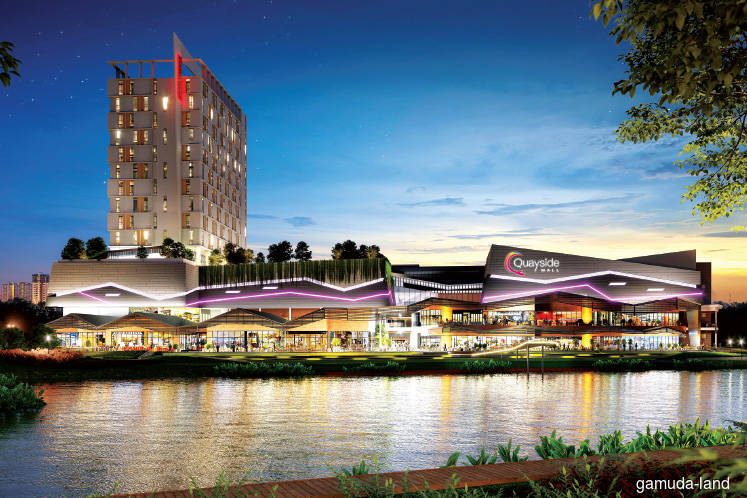 Located in twentyfive.7 in Telok Panglima Garang, Selangor, the Quayside Mall Gamuda Land — the property arm of Gamuda Bhd — has signed on 40 tenants that will occupy 70% of its space. Comprising international and local brands, the tenants range from food and beverage, entertainment and fashion outlets to a grocer’s, pharmacy, bakery and café as well as providers of hoband lifestyle options.

“The biggest anchor tenant is MBO Cinemas, which will have nine halls and about 1,500 seats. We believe the cinema is the correct size for this mall.

“Currently, we are talking to a potential anchor tenant, which I cannot reveal at the moment. It has asked for 38,000 sq ft. We have a good problem wherethe mall cannot cater for the demands of certain anchors that had wanted to come in,” he added.

Gamuda Land chief operating officer Aw Sei Cheh said the developer has planned Quayside Mall as a place for people to come together as a community in a comfortable setting with extensive landscaping, both in and around the mall.

“It is going to be a catalyst that accelerates and augments the vibrancy of this township,” he added.

The 4-storey lakefront mall will have 107 indoor and outdoor retail shops, and a net lettable area of 328,153 sq ft. It will open its doors June next year.

Launched in 2017, twentyfive.7 is a 257-acre township with a gross development value of RM4.3 billion.

Apart from the mall, the developer has also created the Buzz.ar as a gathering place for the community and it is open to the public. Located next to a lake, it is a pet-friendly area with a 600m loop for jogging or cycling.

The Buzz.ar has four shops that are tenanted, three of which are occupied the Heritage Nyonya Cuisine restaurant, Marc et Farid Patisserie and pet-care centre FURIIStyle respectively.

A football field was completed in the township in February and it is operated the Football Talent Academy. Children and teenagers aged between 8 and 16 can enrol for training sessions with the academy.

In April, Gamuda Land launched Luxura, a link villa development. It is the second phase of landed houses in twentyfive.7. Divided into two sub-phases, the project has seen a take-up rate of 80% for its first sub-phase, which has 161 units.