Qualifying assets of SPACs under scrutiny 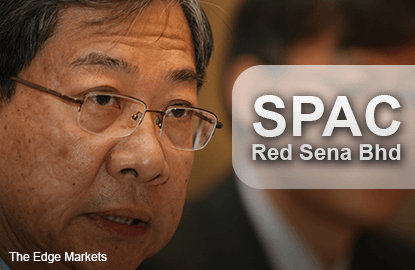 THE long wait for shareholders of former special purpose acquisition company (SPAC) Hibiscus Petroleum Bhd’s to see the oil revenue is a reminder to the investing fraternity of the science of probability when it comes to proven hydrocarbon reserves that could actually translate into earnings.

So, the qualifying acquisitions (QA) of SPACs warrant extra scrutiny by regulators and shareholders given that investment risk will only start rising after the QA.

Last Monday, Sona Petroleum Bhd announced that it is acquiring a 100% stake in Stag Oilfield in the Carnarvon Basin, off Western Australia, for a base purchase price of US$50 million from Santos Offshore Pty Ltd and Quadrant Northwest Pty Ltd.

In March, CLIQ Energy Bhd proposed to acquire a 51% stake in a special purpose vehicle (SPV) that will be incorporated in Kazakhstan for US$117.3 million.

Two oilfield blocks in the Northern Kharazhanbas region in Kazakhstan will be injected into the SPV.

CLIQ’s purchase price for the Kazakhstan oilfields is based on the assumption of a crude oil price range of US$70 to US$89 per barrel between 2015 and 2021. It might be an optimistic assumption.

Sona did not provide the oil price projection in its announcement to Bursa Malaysia on the acquisition of the Stag Oilfield.

Brent crude has been trading at below US$70 per barrel since December 2014.

Sona’s announcement of the acquisition of the Stag Oilfield does not provide revenue and income figures for the oil block, a producing field since 1998.

Without financial details, it would be difficult for Sona’s shareholders to assess the proposed QA.

“Our benchmark is the same as other oil and gas companies. We are looking at the same criteria: the production forecast, the amount of reserves and the capital and operational expenditure,” Sona managing director Datuk Seri Hadian Hashim tells The Edge in an interview last Thursday.

“We are looking at an IRR [internal rate of return] of about 15% over the lifetime of the oilfield. It’s very sensitive on the variables. The field’s end-of-life could be between 2024 and 2030, depending on the oil price scenario,” says Hadian, noting that the variables include capital and operating expenditure.

After the acquisition, Sona is committed to enhancing the production rate of the block by undertaking infill developments. Sona will spend about A$100 million (US$71.5 million) to develop three or four wells in the block, according to Hadian.

According to Hadian, the crude is priced against the Brent crude oil price as the benchmark. As at last Friday, Brent crude was trading at US$49.82 per barrel. 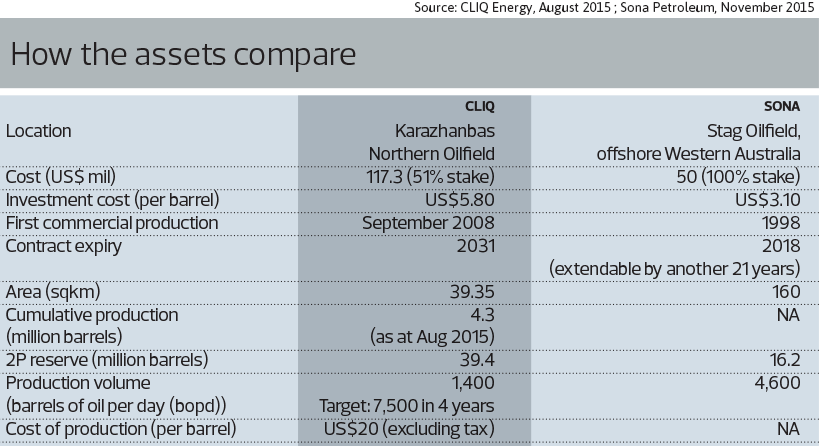 Assuming Sona decides to maintain the existing production rate, the Stag Oilfield may generate annual revenue of about US$83 million at a crude price of US$50 per barrel. And assuming the production cost makes up 40% of the oil price per barrel, gross profit from the oilfield could reach US$49.8 million per year.

Back-of-the-envelope calculations seem to show that Sona is getting a good asset. But how productive is the oilfield now after over 20 years in production? Sona’s plan to spend A$100 million on infill development to enhance oil recovery could change the cost dynamics.

Hadian stresses that the purchase price would be funded solely by the cash raised from the initial public offering which is now held in Sona’s trust account. Sona had RM525.6 million in its trust account as at Oct 30.

The purchase price of US$50 million, or RM215.5 million, represents about 40% of Sona’s funds. The balance would be used for infill development.

Over at CLIQ, the proposed QA isn’t smooth sailing. The ringgit has depreciated sharply after the proposal, coupled with the sharp fall of crude prices. This takes the deal beyond what CLIQ can afford as the ringgit-denominated IPO proceeds have shrunk substantially.

To make up the possible shortfall, CLIQ has proposed a RM210 million cash call.

According to company sources, The Securities Commission Malaysia (SC) has instructed CLIQ’s principal advisor, Maybank Investment Bank, to conduct a revaluation exercise on the QA, highlighting the severity of the situation.

The second valuation is to be completed by end-November, at which point SC has the right to appoint an independent valuer to revalue the asset, says the source.

CLIQ’s funds in its trust account amounted to RM345.78 million or 73 sen per share as at March 31. This points to an estimated shortfall of roughly RM160 million.

Of the RM210 million CLIQ hopes to raise from the rights issue, RM138.4 million has been pegged to fill the shortfall and the remaining RM65.8 million allocated for working capital.

Note that CLIQ’s rights issue is conditional upon the approval of the proposed QA.

And, even if it receives the 75% acceptence it needs for the QA, CLIQ has to be ready for the possibility that some shareholders may choose to vote against it and ask to be refunded

Shareholders who are reluctant to fork out money for the rights issue are likely to vote against the proposed QA and take back their entitlements for the cash in the trust account.

But even if 24.5% vote against it, the QA will still be approved and this means that CLIQ would theoretically have to fork out as much as RM84.7 million from the trust account, resulting in an even bigger shortfall to fund the QA.

Presently, a downward revaluation seems to be what is needed to tip the odds in CLIQ’s favour. Not only will it make the QA more palatable to shareholders, it could solve CLIQ’s funding woes, which at current valuations seem to be the final stumbling block.