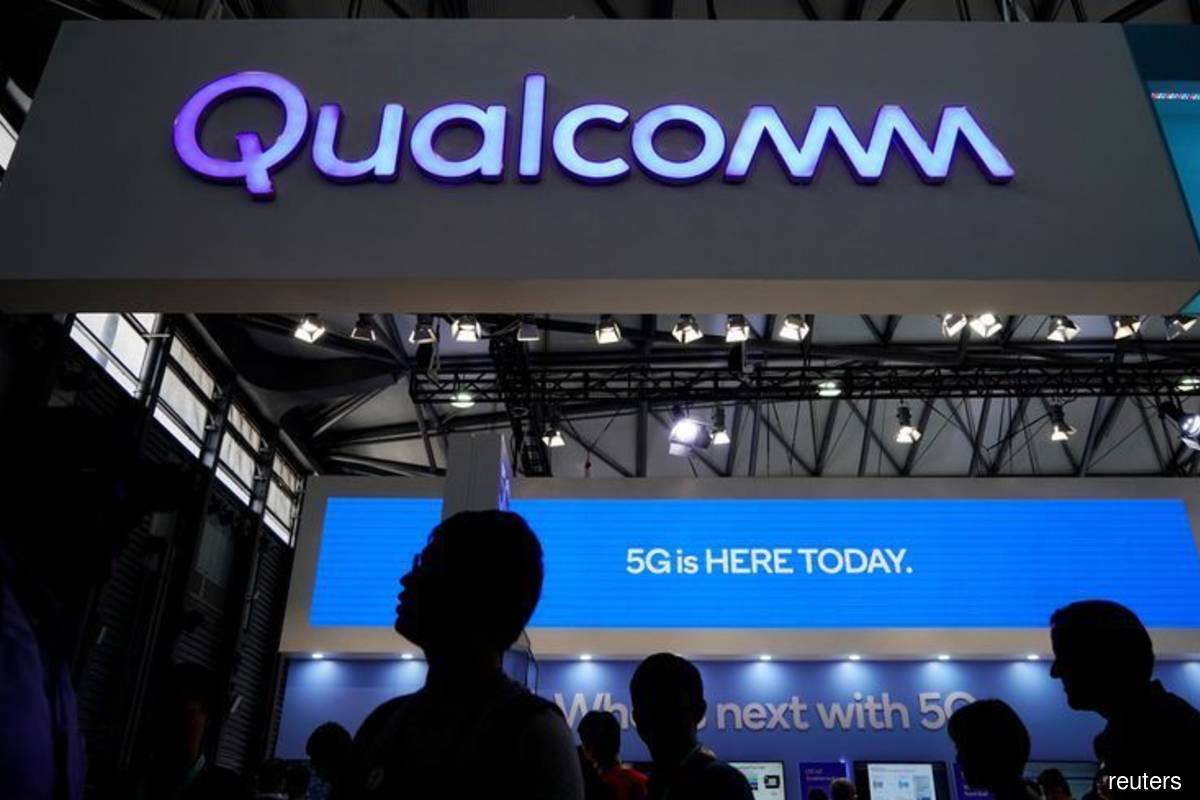 (July 28): Qualcomm Inc, the biggest maker of chips that run smartphones, gave a lackluster forecast for the current period, saying that a weakening economy will hurt consumer spending on mobile devices.

Revenue will be US$11 billion to US$11.8 billion in the fiscal fourth quarter, Qualcomm said in a statement Wednesday. That compares with an average analyst estimate of US$11.9 billion. Excluding certain items, earnings will be US$3 to US$3.30 a share, versus the US$3.26 average projection.

Qualcomm shares, which have outperformed a general slump in chip stocks this year, slipped about 2.4% in extended trading following the announcement.

Rising inflation has eaten into consumer spending power and hurt sales of smartphones, the key market for Qualcomm’s chips. While Chief Executive Officer Cristiano Amon is pushing into different areas — including vehicles, networking gear and computers — the company still relies on phones to fuel growth.

A weaker outlook for the economy prompted Qualcomm to shave about 20 cents from its profit projection for the current period, executives said on a conference call with analysts.

Qualcomm now expects smartphone shipments to decline in the mid-single-digit percentage range in 2022 from the prior year — a dimmer outlook than it had previously. The chipmaker’s customers are cutting back on purchases of components for midrange and lower-end Android phones as they try to work through excess inventory.

While demand for premium phones is still relatively robust, there will be fewer 5G phones sold than Qualcomm had projected.

“The market is likely to be smaller than we originally forecast,” Amon said. “The weakness we saw was in the mid to low tiers.”

Amon pointed to record revenue from Qualcomm’s automotive and so-called Internet of Things chips, but echoed tech peers in acknowledging a “challenging” economy.

Qualcomm’s main product is the processor that runs many of the world’s smartphones. It also sells the modem chips that connect Apple Inc’s iPhone to high-speed data networks. In addition, Qualcomm licenses the fundamental technology that underpins modern phone networks, bringing it another revenue stream.

Sales of Qualcomm’s phone-related chips surged 59% to US$6.1 billion in the fiscal third quarter, compared with an estimate of US$6 billion. Revenue from the Internet of Things — a category that includes smart appliances and other devices — was US$1.83 billion. That compares with an average projection of US$1.84 billion. Sales from chips used in vehicles increased 38% to US$350 million, but fell just short of more bullish estimates.

The company generated US$10.9 billion in total revenue, in line with estimates. Profit in the three months that ended June 26 was US$2.96 a share, compared with Wall Street’s average estimate of US$2.86.

The company is unusual in the chip industry because a large chunk of its profit comes from licensing. Makers of phones pay to use Qualcomm’s technology, regardless of whether they buy its chips, because the company owns patents that cover some of the fundamentals of mobile communications.

Separately, Qualcomm said it has signed an extension of its technology licensing agreement with the world’s largest phone maker, Samsung Electronics Co. And the South Korean company agreed to use Qualcomm chips in its Galaxy phones, tablets and computers. Samsung will license Qualcomm’s technology until the end of 2030, the two companies said in a statement.