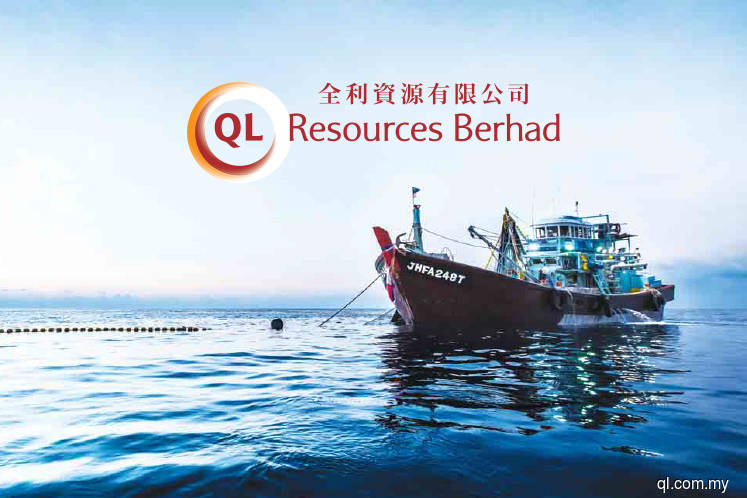 Growth is expected to be driven by its marine products manufacturing (MPM) division, in which the group is upbeat about its outlook.

“So far, the first quarter in the new financial year already showed that we have done better than the corresponding period last year. We are optimistic about doing better than FY19, meaning (we will chart) another record performance for this year,” said QL founder and executive chairman Chia Song Kun.

The group then kicked off FY20 on a strong note, with 1QFY20 net profit increasing to RM50.55 million from RM43.86 million a year ago, as its MPM division recorded sales and profit before tax growth of 30% and 52% respectively, on stronger contributions from fishmeal and surimi-based products. Revenue rose 21.7% to RM993.21 million from RM816.18 million.

The group, however, expects the performance of its palm oil activities (POA) division to weaken this year, mainly because of soft crude palm oil (CPO) prices, unfavourable weather conditions, and a lower palm oil extraction rate.

Admittedly, “rather bearish” on the outlook for its POA division, Chia said the group is expecting CPO prices to hover between RM2,000 and RM2,200 per tonne this year, compared with the average RM2,100 in FY19, and RM2,600 in FY18.

As for the integrated livestock farming (ILF) division, Chia said the group’s diversified strategy into the regional market has helped to weather challenges that it is facing domestically.

“For the past one year, our regional business (the poultry segment) has done reasonably well, (as compared to the) domestic market, where we faced an oversupply of eggs that was quite serious in the first half of last year.

“Then, there was a disease outbreak throughout the country which resulted in an egg shortage and a strong rebound in prices. But after the disease subsided, the egg oversupply situation has come back,” Chia said in explaining the erratic pricing for eggs that the group has had to contend with.

As such, the group is neutral on the ILF business in the domestic market but upbeat on its regional performance. Thus, it plans to set aside some RM200 million in the next three years to set up two layer farms — in Indonesia and Vietnam — with the aim of doubling egg production capacity there.

Chia said the group plans to about double the number of FamilyMart stores in Malaysia to 170 by end-FY20, compared with the 90 it had as at end-FY19. The business, which has already broken even, said Chia, will have 125 stores by Aug 31. The expansion, he added, will centre on the Klang Valley, Melaka, Negeri Sembilan and Johor.

QL Resource shares closed one sen higher at RM6.91 yesterday, giving it a market capitalisation of RM11.21 billion. In the past one year, the stock has climbed 16%.