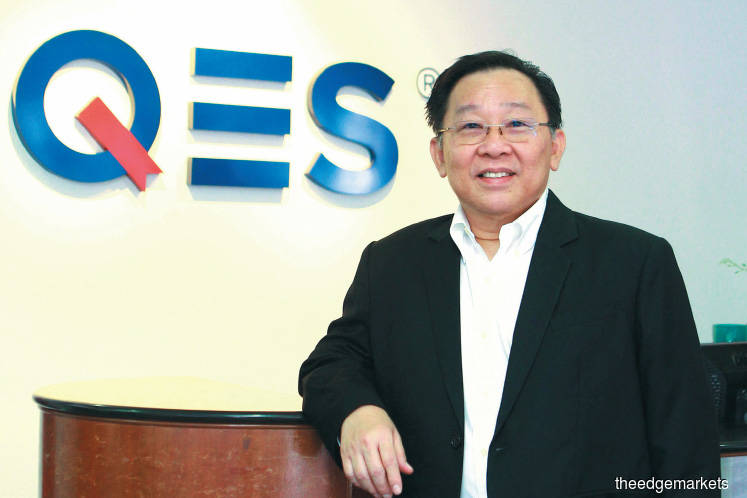 Chew says the group expects 2HFY19 to be better as orders have been picking up since August. Photo by Patrick Goh KUALA LUMPUR: The semiconductor industry and players forming part of its supply chain have been hit hard by the ongoing US-China trade conflict.

However, the group is hopeful of an earnings uplift for the next financial year ending Dec 31, 2020 (FY20), driven by a new product and a pickup in orders from its manufacturing segment.

QES’ setback this year saw it reporting a net loss of RM1.53 milion for the second quarter (2QFY19) — compared to a net profit of RM5.1 million a year ago — the group’s first quarterly loss since its listing. Revenue for the quarter was down 12.9% to RM40.51 million.

“But I would say our earnings were brought down mostly by a majority of our customers [in the manufacturing segment] who are automotive IC (integrated circuit) makers, impacted by a decline in global vehicle sales,” he said.

“The decline in automotive sales prompted our customers to postpone their buying activities, hitting us hard.

“Going forward, we are focusing on having a product mix, meaning the same machine being sold to different segments of customers. For example, semiconductor firms supplying Internet of things devices and smartphones. By doing that, we are not so concentrated on just the automotive segment.”

Chew said the group expects 2HFY19 to be better as orders have been picking up since August.

“My only concern is I may not be able deliver in [good] time for this year, as the delivery lead time for our machines is about three months. So, for orders in the later part of the year, we can only recognise them in our books next year.”

QES’ order book as of 2QFY19 stood at RM48.6 million, of which RM40.14 million was from its distribution division and RM8.48 million from its manufacturing division.

On the aforementioned new product, the group is looking to commence pilot testing of its Fully Automatic Vision Inspection System (Favis) by 3QFY20. Favis is an upgraded vision inspection system with full automation covering wafer probing, dicing and wire bonding.

“The product will be at a testing phase before its full commercialisation. Conservatively, if we can sell three to five machines in 2020, it could generate something like US$3 million in revenue,” said Chew.

Manufacturing activities accounted for 18.3% of the group’s revenue for FY18, with QES looking to grow this further. It is looking to expand its manufacturing customer base to China this year, by working with sales partners and distributors there.

The group’s distribution division remains the largest revenue contributor at 81.7% for FY18.

QES distributes inspection, test and measurement equipment materials for its principals — mostly from Japan, Europe and the US — not just in Malaysia but also in other Asean countries where it has a presence — Singapore, Thailand, the Philippines, Indonesia and Vietnam.

“Besides product sales, we also have recurring income from servicing the equipment sold, contributing around RM35 million to RM40 million to our revenue yearly,” said Chew.

Chew and executive director Liew Soo Keang are the group’s largest shareholders, with 33.66% and 26.09% stakes respectively. The two are former schoolmates; their alma mater is Kolej Sultan Abdul Hamid in Alor Setar.

QES’ share price rose to a record-high of 35.9 sen on Oct 4 last year. Since then, it has been declining, closing at 17.5 sen last Friday — below the initial public offering price of 19 sen — with a market capitalisation of RM132.7 million.

AmInvestment Bank, the sole research house covering QES, in an Aug 29 note, said it still likes the group for its long-term expansion plans for the manufacturing segment and resilient recurring revenue from its trading and servicing business.

However, it is taking a cautious stance on the group due to uncertainties from the long-standing dispute between the US and China. AmInvestment has a “hold” call on the stock with a fair value of 21 sen.