QES Group aims to be a big-name equipment player 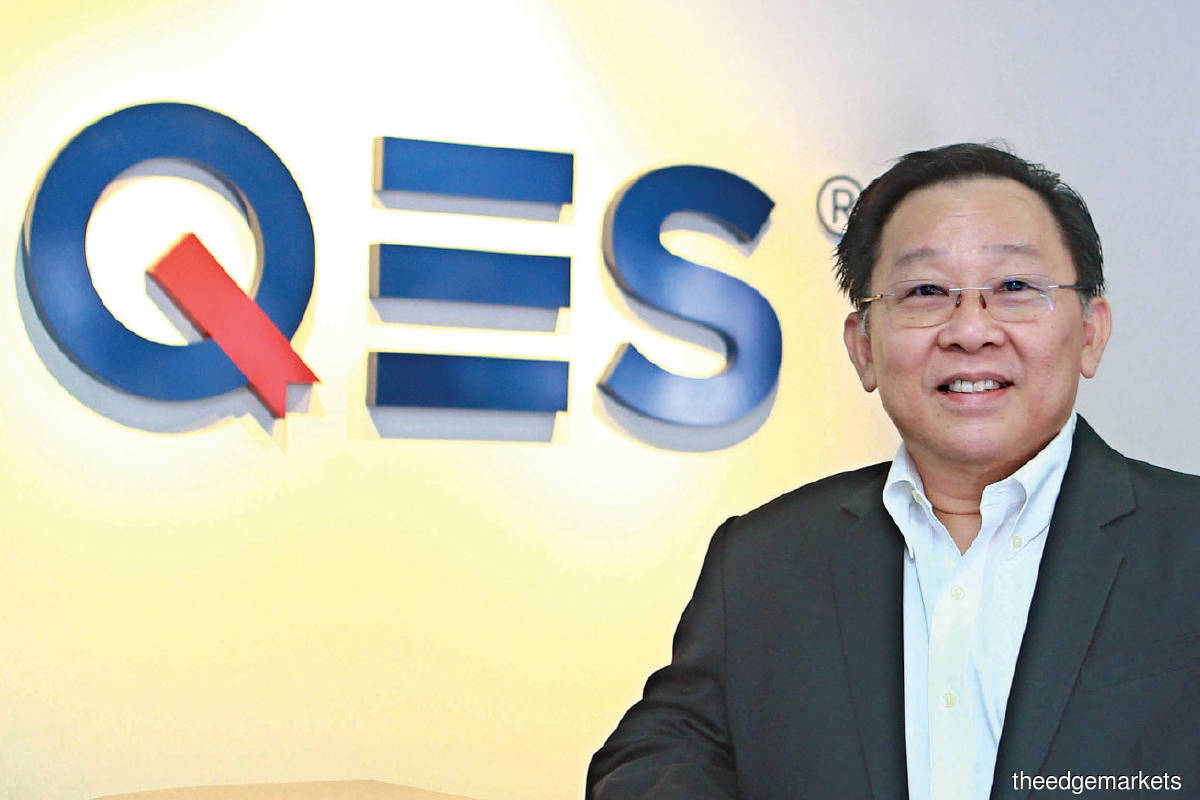 Chew: People often ask me whether QES can be as big as ViTrox, Pentamaster, Greatech and MI Technovation. I don’t discount such possibilities. That’s our plan actually. (Photo by Patrick Goh/The Edge)

LOOKING up at its bigger peers, Shah Alam-based automated test equipment (ATE) manufacturer QES Group Bhd can already see itself among their ranks in the not-too-distant future.

Also its largest shareholder, QES managing director and president Chew Ne Weng, is not shy about the group’s ambition to become an equipment giant.

“People often ask me whether QES can be as big as ViTrox, Pentamaster, Greatech and MI Technovation. I don’t discount such possibilities. That’s our plan actually. It is where we want to be one day. To me, it is all about hitting the volume and scale,” he tells The Edge in a virtual interview.

According to him, the fixed costs of QES’ manufacturing business is expected to reach a constant level, and when it reaches an inflection point, any additional revenue that comes in will largely be profit.

“I would say we are at the 60% to 70% level of reaching that inflection point. We will scale it up, and once we hit the inflection point, our profit will grow significantly within the next two to three years. By then, hopefully, our market capitalisation could reach RM1 billion,” says Chew.

QES started in 1991 as a distributor of test, inspection and measuring equipment, before eventually becoming a manufacturer of these equipment. Today, the group has two core business divisions — namely, distribution and manufacturing.

Following the company’s listing on the ACE Market of Bursa Malaysia in 2018, many investors and fund managers have expressed particular interest in its manufacturing division, which makes equipment for the semiconductor industry.

“We have quite a large spectrum of product lines, covering various test and inspection processes, from wafer fabs all the way to test and assembly. We have all the equipment for wafer inspection, post-wafer probing and post-dicing, wafer sorting and handling, as well as wafer packing and unpacking,” Chew elaborates.

“The only area that we don’t cover is the final test, which we think is a very crowded space. The likes of ViTrox and Pentamaster are covering this area, while many other non-listed local players are there too,” he explains.

In the distribution business, QES distributes the products of principals — from countries such as Japan, the US and Europe — in the Asean region.

“We have offices in Malaysia, Singapore, Thailand, Indonesia, the Philippines and Vietnam. Of course, we also sell our own products in these markets, but the product range is different as we don’t want to compete directly with our principals,” stresses 58-year-old Chew, who co-founded QES and is the single largest shareholder with a 30.84% stake in the company.

Despite posting a slight dip in revenue in the financial year ended Dec 31, 2020, QES’ earnings jumped 2.6 times to RM8.7 million from RM3.3 million a year ago.

In the first quarter ended March 31, 2021, net profit soared to a new record high of RM6.9 million, representing a year-on-year growth of 176% from RM2.49 million a year earlier. As at March 31, cash and cash equivalents stood at RM69.4 million.

Commenting on stock valuations, Chew observes that QES had been trading at a historical price-earnings ratio (PER) of more than 60 times. But in the aftermath of its latest financial results on May 19, its PER has been reduced substantially to about 38 times currently.

“If you compare our PER with other ATE manufacturers, you will realise that QES has a good value proposition. Our stock valuation still appears to be rather attractive,” he asserts.

Currently, 16% to 18% of QES’ revenue comes from its manufacturing division, and the remaining 80%-plus from its distribution division.

The beauty of QES’ distribution business, Chew points out, is that it provides the group with a huge chunk of recurring income, given that it had installed more than 12,000 units of equipment in the Asean region and other parts of the world over the past 30 years.

“These equipment need to be maintained and serviced regularly. Every year, we would consistently collect a recurring income of about RM40 million, which constitutes 20% to 25% of our group revenue. In other words, our recurring income from the distribution division alone is bigger than our manufacturing division.”

Nevertheless, the manufacturing division will remain a key pillar to be built up over the next two to three years. “We hope the manufacturing business [will be able to] contribute up to 30%-40% of our group revenue. This is one area that we think we can grow exponentially,” says Chew.

Unlike its distribution business — where it is an Asean specialist but still needs to follow its principals’ strategic directions — its manufacturing business can be expanded into any country.

QES aims to increase the sales of its fully-automated equipment, as the group foresees higher demand from its customers in this area.

“For our manufacturing division, we target to launch at least two to three new products or upgraded products every year. We are confident that we [will be able to] launch a fully-automated wafer inspection equipment by the end of this year,” says Chew.

“In fact, we are already selling the semi-automated wafer inspection equipment, so we have the necessary tools and expertise to make a fully-automated one. It is natural for us to go into this area,” says Chew, adding that an aggressive expansion into China is also in the pipeline.

“If you look at ViTrox and Pentamaster, they have significant exposure to the China market, whereas our presence in China is still relatively small. Today, China only makes up 4% to 5% of our manufacturing revenue, but we hope in years to come, the contribution will increase to at least 20%.”

Interestingly, QES operates a business unit in Batu Kawan, Penang, which is focusing on the smart manufacturing business and Fourth Industrial Revolution (IR 4.0).

“Today, we see demand not just from semiconductor firms but also industrial players to go into smart manufacturing. They will need a lot of smart solutions from us. We are talking about sensors, data and software. We have a team to serve this market segment,” says Chew, pointing to a tracking system for cleanroom operators as an example.

“Just imagine if our RFID (radio-frequency identification) can be embedded into cleanroom garments, and our software can help track whether the garments are clean. The smart manufacturing business should contribute positively to our group manufacturing revenue in the future.”