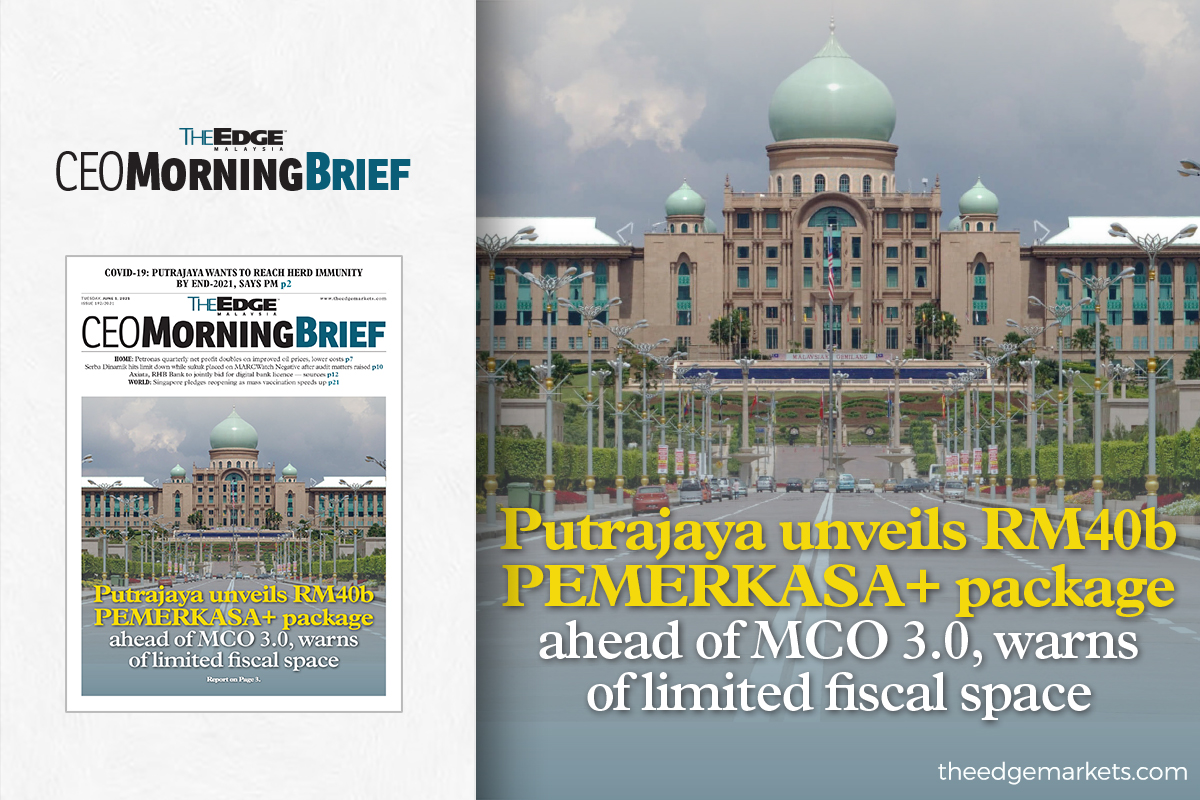 PM Muhyiddin unveils RM40b PEMERKASA+ economic package on Monday, May 31, 2021 night, ahead of the nationwide MCO 3.0 which begins on Tuesday June 1, 2021. (Photo by Shahrin Yahya/The Edge)

Among the initiatives include RM1 billion to be channelled to strengthen the public healthcare system and increase its capacity, as well as a three-month automatic loan moratorium extension for B40 groups, as well as individuals who lose their job and small and medium enterprises (SMEs) that shut down during MCO 3.0.

"The closure of economic sectors will have a huge impact on the economy," Muhyiddin said. "I would like to be frank (and say) that currently the government has very limited fiscal space to spend.

"But on the basis of concern for the people's well-being, the government will do its best to strike the balance between lives and livelihood," he said.

The three-month loan moratorium, said Muhyiddin, will provide relief to five million borrowers amounting to some RM30 billion. The government will also extend its wage subsidy programme for one month for RM1.5 billion, to assist 2.5 million employees and 200,000 employers, he added.

Other initiatives include the extension of sales tax exemption for passenger vehicles, as well as for the stamp duty exemption provided under the Home Ownership Campaign — both until end-2021.

It is also giving out additional RM500 each in cash assistance for eligible micro SMEs, and a total of RM68 million to those in the tourism segment such as tour guides and bus drivers.

As a show of support, Muhyiddin said the cabinet ministers and deputy ministers will forfeit their salary for three months from June to August 2021, to be channelled to the Disaster Trust Fund for Covid-19-related spending.

Prior to PEMERKASA+, the government had announced multiple economic packages since MCO 1.0 which it valued at RM340 billion. There is still an outstanding RM100 billion to be utilised this year, Muhyiddin said.

Malaysia is currently scheduled to undergo MCO 3.0 for 14 days starting from June 1 until June 14, as the nation grapples with rising cases with daily new cases exceeding 8,000-mark, declining healthcare capacity and fatigued doctors and nurses.