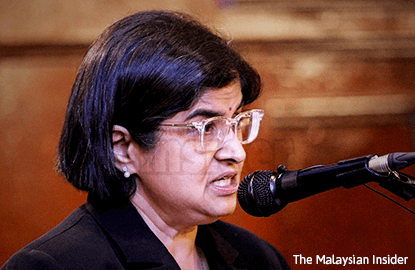 (Dec 3): There is only one answer to where the RM2.6 billion is and where it came from, says Datuk Ambiga Sreenevasan, in rejecting Putrajaya's explanation in Parliament today on the funds.

Ambiga disagreed, saying those involved were only hiding behind the excuse while refusing to answer a very simple question.

“The matter is not presently in court.

“Even if it is, the prime minister should only have one answer to where the RM2.6 billion is and where it came from.

“They are just hiding behind sub judice and refusing to answer a very simple question,” she told reporters at the Parliament building today.

Zahid, who is also deputy prime minister, took the floor to answer on behalf of Najib and provided a short explanation about the ongoing investigations under Standing Order 14, which allowed a minister to make a statement to the House on a specific matter.

"Any statement made about this issue now can cause prejudice against the individual under investigation," Zahid said.

He added that he was advised by Attorney-General Tan Sri Mohamed Apandi Ali not to issue any public statement on the matter.

Zahid repeated a finding by the Malaysian Anti-Corruption Commission back in August that the sum was not from 1Malaysia Development Berhad but from political donor whose identity was known but yet to be revealed.

He also justified political donations were a norm and there was no law against it. – The Malaysian Insider