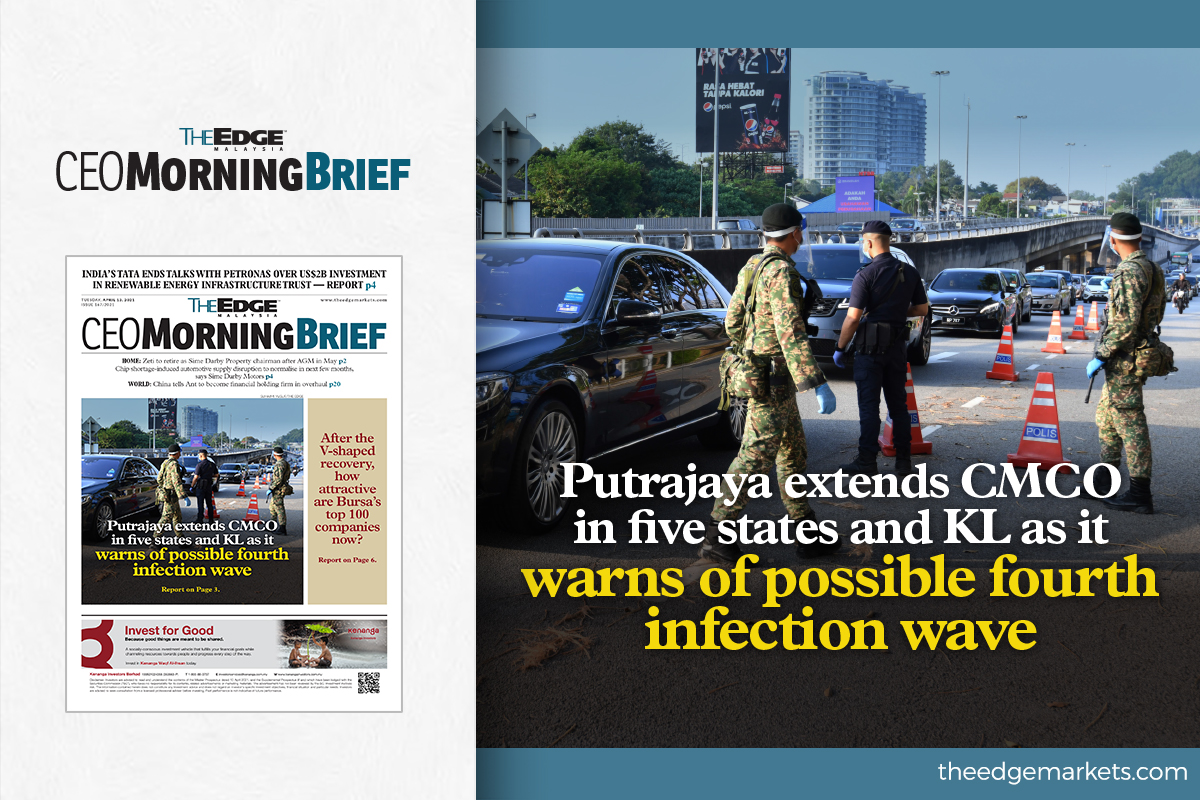 KUALA LUMPUR (April 12): Putrajaya, which today warned that Malaysia could potentially face a fourth wave of the pandemic, has decided that Selangor, Johor, Kelantan, Kuala Lumpur and Penang will remain under the Conditional Movement Control Order or CMCO from April 15 until 28.

Sarawak, too, will be kept under the CMCO from April 13 until 26, Bernama reported Senior Minister (Security) Datuk Seri Ismail Sabri Yaakob as saying during a media conference.

Meanwhile, the Recovery Movement Control Order or RMCO in Perlis, Melaka, Pahang, Terengganu, Sabah, Putrajaya, Labuan, Perak, Negeri Sembilan (except in Seremban) and Kedah (except in Kuala Muda) has also been extended from April 15 to 28. At the same time, the government has placed Kampung Meruntum, Sabah under the Enhanced Movement Control Order from April 13 to 26, following a rise in Covid-19 cases in the locality.

Ismail Sabri, who sounded the warning of a potential fourth wave of infections, said the possibility is there based on the coronavirus' infectivity rate here as recorded by the Ministry of Health, which is over 1.0.

"The rate of Covid-19 infectivity according to yesterday's daily case nationwide rose to 1.06. We must all comply with the SOPs (standard operating procedures), more so since there are a lot of activities during the Ramadan month, such as the Ramadan bazaars, breaking of fast and Tarawih prayers," he told reporters.

States could tighten SOPs if necessary

He also urged state governments to follow the SOPs issued by the federal government, to standardise regulations and avoid confusion among the people. However, the states could tighten the SOPs if necessary, he said.

"(When) the National Security Council sets the SOPs, they should be followed by every state, but we are also of the view that the state governments can use their own discretion based on cases that occur in their respective states.

"... I have discussed it with the Ministry of Health that the state governments can impose stricter regulations if necessary. What is not allowed is to relax the SOPs set by the federal government," he was quoted as saying.

Yesterday, the Kelantan government announced the cancellation of Ramadan and Aidilfitri bazaars statewide, even though the federal government had earlier approved the opening of such bazaars this year.

Ismail Sabri, meanwhile, said no actions can be taken against those who refuse to take the Covid-19 vaccine, as the jab is not mandatory but an option.

He also said the government has yet to discuss vaccination for people wanting to go abroad, and that the matter depends on the country they want to visit.

He cited an example of the Saudi Arabian government, which is likely to make the Covid-19 vaccine compulsory for pilgrims wanting to perform hajj this year, and said the matter is still under discussion.

Eateries allowed to operate until 6am during Ramadan

The government will allow all restaurants, stalls, eateries — including coffee houses in hotels — as well as fast-food shops and food delivery services in states under the CMCO, RMCO to operate until 6am during the fasting month of Ramadan, said Ismail Sabri.

This is to enable those fasting, especially those who are single, to purchase food for their pre-dawn meals (sahur), he said. Eateries in shopping complexes or supermarkets are the exception, he said, as they will still have to adhere to the operating hours of the said premises.

Ismail Sabri also said that hotels and restaurants would be allowed to hold buffets — with food handlers serving the food to customers at these buffets — for the breaking of fast, with strict compliance of the SOPs.

"For the breaking of fast in offices and halls, areas under CMCO must ensure the event occupies only 50% of the venue's capacity while 100% capacity is allowed for RMCO areas, but in accordance with the stipulated SOPs," he was quoted as saying.