Puncak’s EGM to be called soon

The results made up 67% of our previous estimate and 73% of consensus forecasts. We have cut our FY14 forecast earnings by 11%.

The group’s pre-tax profit fell 16% y-o-y to RM200.7 million mainly due to lower contributions from the oil and gas (O&G), and construction segments, higher finance costs, and provision of impairment loss on trade receivables.

Its water division reported a lower profit before interest and tax (PBIT) of M315 million mainly due to higher operating expenses and provision on impairment loss on trade receivables.

Positively, losses at its O&G division contracted to RM3.6 million for the 9MFY14 period due to higher contributions from GOM Resources Sdn Bhd.

Recall that works for its Pan Malaysia job only commenced in April this year following a deferment by Petroliam Nasional Bhd last year.

Its construction division reported a PBIT of RM6 million for the 9MFY14 period, due to contributions from new jobs it secured this year (worth RM544 million).

Recall that the group entered into a sales and purchase agreement earlier this month to dispose of its 100% and 70% stakes in Puncak Niaga Sdn Bhd and Syarikat Bekalan Air Selangor Sdn Bhd, respectively, to Pengurusan Aset Air Selangor Sdn Bhd for RM1.55 billion.

Puncak is expected to distribute RM534.3 million (or RM1.29/share based on current shares outstanding) from the proceeds as cash dividends to shareholders within three months. The extraordinary general meeting is expected to be called soon with the completion of the disposal by 1QFY15.

Post-disposal, Puncak may be classified as a cash company and trigger Practice Note 17. The group intends to utilise RM1.02 billion from the proceeds for future investments which may include expansion into the O&G and plantation businesses. The group is also one of four shortlisted for the RM800 million incinerator job in Kepong.

We maintain hold until we see further clarity on the group’s future business plans. — AmResearch, Nov 18 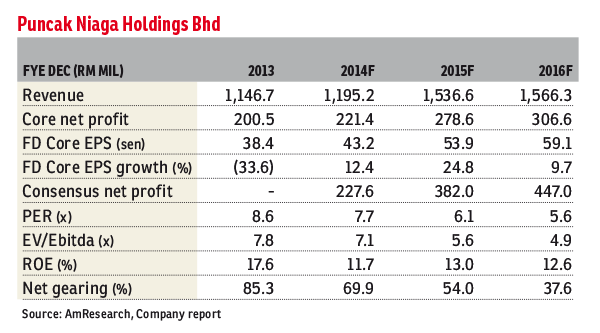