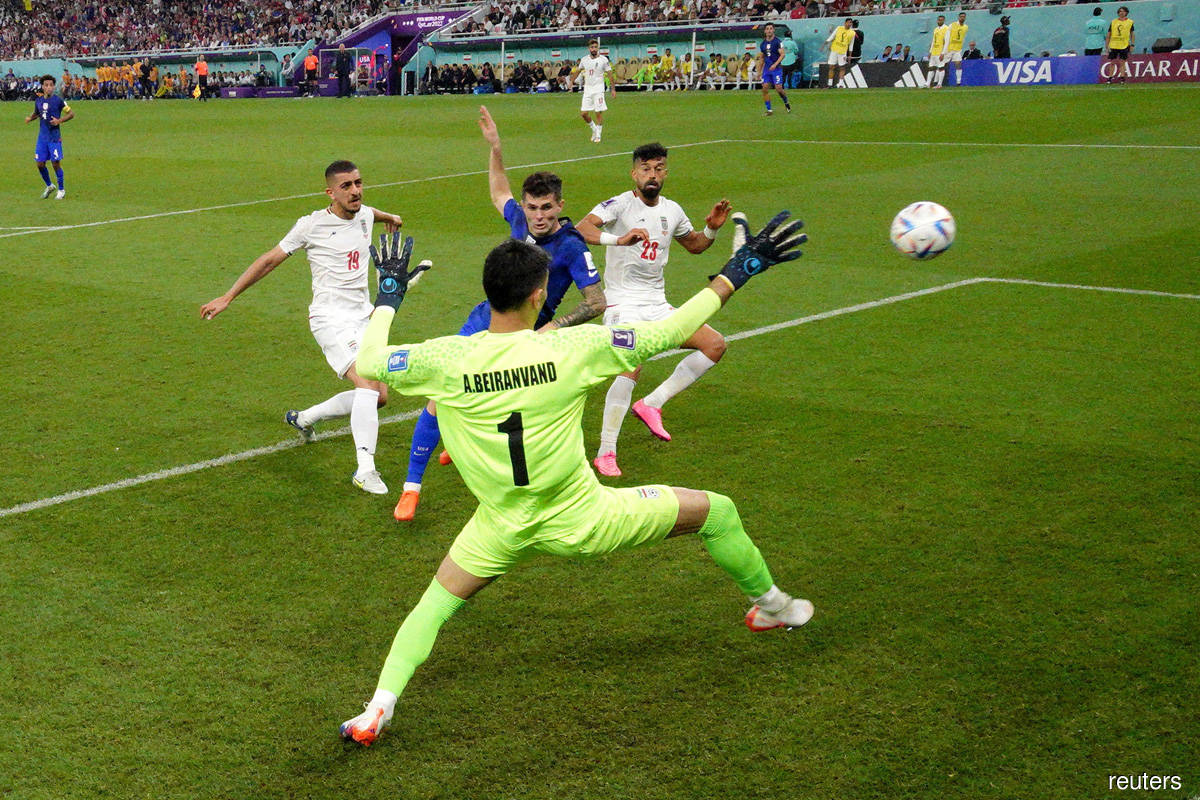 DOHA (Nov 30): The United States stormed into the World Cup last 16 on Tuesday by beating Iran 1-0 at a cacophonous Al Thumama Stadium after Christian Pulisic bundled the ball home in a Group B showdown shrouded by decades of enmity between the two nations.

Pulisic's 38th minute goal proved enough for the Americans to advance at the expense of their geopolitical rivals in an eagerly awaited rematch of their 1998 World Cup group stage meeting, which Iran had won 2-1.

Sergino Dest headed the ball into the path of the sprinting Pulisic, who swept it into the net to momentarily silence the raucous Iranian supporters in front of him but he crashed into the outstretched Alireza Beiranvand in the process.

Pulisic was back on his feet after receiving treatment for a few minutes but did not look comfortable and he was replaced by Brenden Aaronson at the break after sustaining an abdominal injury, in a major blow for the Americans' knockout stage hopes.

The U.S., who drew their first two games with Wales and England, will face three-times finalists Netherlands on Saturday for a place in the quarter-finals.

"No update on his status," U.S. coach Gregg Berhalter told the BBC. "But it's a wonderful thing when one of your best players is also one of the most hard working. He's certainly that. I can't say enough positive things about Christian."

The Americans finished two points behind Group B winners England to reach the last 16 for the fifth time since 1994. Iran finished third with three points, with Wales bottom with one point.

Berhalter's team, the second youngest at this year's finals, may lack experience on the big stage but they stepped up and delivered a commanding performance when their spot at the World Cup was on the line.

Knowing that only a win would keep them in the tournament, they pressed with high intensity from the first whistle - their full backs almost playing as wingers - and chances flowed thanks to their slick attacking style.

Tim Weah, who spurned two glorious opportunities before Pulisic put the Americans ahead, had the ball in the net late in the first half but his strike was ruled offside.

Iran only needed a point to advance but they were largely restricted to playing on the counter and unable to muster a credible attempt at scoring until the second half.

Substitute Saman Ghoddos, who replaced Sardar Azmoun at half time, almost pulled Iran level after meeting a superb cross from Ramin Rezaeian while Morteza Pouraliganji met a free-kick with a diving header that went just wide deep in stoppage time.

Mehdi Taremi appealed for a penalty in the closing stages as he went down with Cameron Carter-Vickers trying to stop him and his team mates surrounded the referee but their protests were waved away as Iran ultimately failed to register a shot on target.