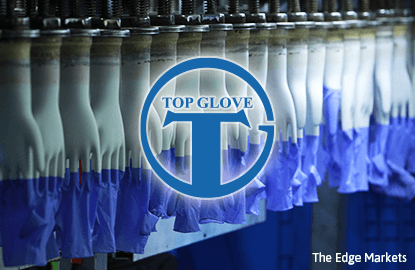 KUALA LUMPUR (Jan 13): PublicInvest Research has maintained its “Neutral” rating on Top Glove Corporation Bhd with a higher target price of RM15.26 and said it believes that the stock’s growth has been fully-priced in despite favourable currency and raw material prices.

In a note today, the research house said that it has positive views of the prospects and ongoing operations of the group, after meeting with Top Glove’s management and visiting Factory 25 (F25).

“Key takeaways include the Group’s sustainable growth drivers of internal efficiencies coupled with favourable external factors, such as strengthening of the US Dollar and softer raw material prices.”

It said F25 is running at a line speed of 35,000 pcs/hour, producing 2.4 billion nitrile gloves per annum. Current utilisation rate is about 85%-90%. The lines include a double-dipping process which will further enhance the quality by minimizing pinholes on the gloves.

Top Glove has also invested less than RM20 million to set up its own mould manufacturing facility.

“We understand that the manufacturing plant will be rolled out in two phases with 1.4 million units/yr total capacity, which accounts for circa 50% of the group’s current total requirement.”

“The first phase is expected to commence in April.”

With its internal mould supply, Top Glove is estimated to save about 15% of its total mould costs, and can control the product quality to extend its useful life, the research house noted.

According to PublicInvest Research, management is also aiming to add 2 factories/yr (which should translate to an additional 4-5 billion pieces of gloves) should demand continue to expand. It assumes product mix will change from the current 68:32 of NR:SR to 63:37 and 60:40 (Top Glove’s product mix target) for FY16 and FY17 respectively.

“Top Glove continues to lookout for M&A deals within the glove sector that would complement its existing business.”

However, it has put on hold its plans to venture into upstream rubber plantation, and is possibly looking to dispose its plantation land, due to the current over supply of natural rubber commodity and softer latex prices.