Public urged to give authorities space to probe into 1MDB 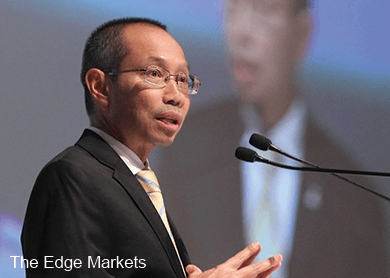 KUALA LUMPUR (July 27): All parties — be it the government and private sphere — should play their respective roles in allowing the investigation into troubled 1Malaysia Development Bhd (1MDB) to proceed without interference.

Minister in the Prime Minister's Department Datuk Seri Abdul Wahid Omar urged the people to give space to the Public Accounts Committee (PAC) and the special task force probing allegations of transfer of 1MDB funds into the prime minister's personal bank accounts. The task force consists of officers from the Attorney-General’s Chambers, Bank Negara Malaysia (BNM), the Malaysian Anti-Corruption Commission (MACC) and the police.

"It is important that we play our respective roles. We must allow investigation (by the two bodies) to continue without fear and favour," he told reporters, after witnessing the signing ceremony between AirAsia Bhd and Destini Aviation Sdn Bhd on their collaboration for maintenance, repair and overhaul (MRO) services.

"For the rest of us, it is important for us to remain focused on the task at hand. On my part, I will work with ministers to execute the 11MP (11th Malaysia Plan).

"Leave it to the respective people to do their parts professionally, so that Malaysia can grow," he added.

Wahid said the public and private spheres can help the economy to grow by spending domestically within their means and generate economic activities, respectively.

Both the PAC and the taskforce are investigating 1MDB, which has raked up RM42 billion in debts in just six years of operations.

On June 28, 2015, 1MDB had reconfirmed its attendance and commitment to fully cooperate with the PAC, after the duo had missed an initial meeting with the committee on May 26, 2015, citing they were away on official business.

Deputy Prime Minister Tan Sri Muhyiddin Yassin was reported as saying yesterday (Sunday, July 16) that the government should not underestimate the people’s negative sentiments towards 1MDB, as critics are quick to rebut explanations made by the government, such as those by Second Finance Minister Datuk Seri Ahmad Husni Hanadzlah and Urban Well-being, Housing and Local Government Minister Datuk Seri Abdul Rahman Dahlan.

Muhyiddin had also said he did not have any ill intention in questioning the controversial fund and that the prime minister himself should personally take the lead to explain the issue to the people.

On BNM's international reserves which fell to the lowest in almost five years as of July 15, 2015, Wahid said Malaysia is well-equipped to maintain the country's financial position, compared with when the country faced the financial crisis in 1998.

"If you look at how we've progressed from the Asian Financial Crisis in 1997-1998, our reserves have more than tripled," he said.

"We have the strength to absorb the reversal of flows back into the US dollar and that has the ability to maintain stability in the country's overall financial position," he added.

Wahid also said coupled with Malaysia's reduced dependance on oil revenue, the government has identified several initiatives to boost exports, in order to maintain trade surplus and current account surplus, but did not elaborate.

"We will continue to focus on the country's fundamentals. Malaysia continues to be a good place for investment," he added.