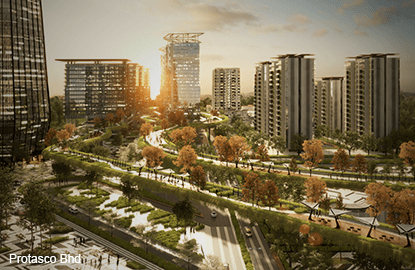 KUALA LUMPUR (Sept 22): Protasco Bhd will hand over its entire Phase 1 of the De Centrum City development in Kuala Lumpur South, comprising a shopping centre block with 29 retail units, a service apartment block with 320 units, a small office/home office block with 192 units and 54 shop lots to purchasers in December this year.

The property developer had first unveiled the RM10 billion new township in 2007. Spanning 100 acres, the new township will be developed in stages over a 15-year period.

The freehold tract of land where the township is being built is currently the site for De Centrum Sales Gallery and the Infrastructure University Kuala Lumpur (IUKL).

“De Centrum City is possibly the first township in Malaysia to be built around an existing academic institution, and there is growth potential and opportunity not only for those involved with academia, but also for families looking to set up new homes, companies looking for a prestigious address outside the city, businessmen and investors,” Protasco's managing director of property and infrastructure, Datuk Kenny Chong Ther Nen, said in a statement today.

Protasco said Phase 1 of the project entails a shopping centre called Gallerie @ De Centrum, which is scheduled to open by February 2016.

To date, 70% of the shopping centre has been leased out to tenants who will operate a fitness centre, convenience stores, pharmacies, book store, fast-food restaurants and a supermarket.

Under Phase 1, the De Centrum City development also features two condominium towers (A & B) called De Centrum Unipark, which have been completed; while the remaining two blocks (C & D) will be completed by 2017. When fully completed, De Centrum Unipark will offer a total of 640 units.

Protasco said that coming up next is a high-end residential development, dubbed Rimbawan [email protected] Centrum, which will feature 504 high-rise condominium units and 13 exclusive villas.

“Given [that] the location of De Centrum City [is] in close proximity with IUKL, University Putra Malaysia and other institutions of higher learning, it is envisioned that a knowledge community will grow and evolve from here — with start-up companies, technology incubators and other amenities to support an entrepreneurial eco-system,” said Chong.

Protasco said most of the existing structures within the land will be demolished, to make way for new ones to be built according to the master plan.

"The existing university campus will also be upgraded, with green features added — from a network of elevated green bridges with public parks and water features, to sheltered pedestrian walkways and bicycle paths.

"A shuttle bus service will be implemented to link commuters between De Centrum City to the Kajang mass rapid transit station, which is scheduled to be operational by July 2017," it added.

The group said De Centrum City is expected to be a catalyst of growth for the Kuala Lumpur South corridor, by providing investment opportunities and creating new jobs. The new township will cater to the existing population of 500,000 located within an approximate 20-minute radius, which is projected to grow exponentially within the next 10 years.

On the prevailing slow economy, Chong said: “We own the entire prime land of De Centrum City, which is unencumbered, so there is less pressure on us to achieve unrealistic targets, as we can pace our growth to coincide with general economic growth accordingly."

"We believe [that] a sound long-term development will override any temporary fluctuations in the market,” he added.

Protasco's shares closed down 0.62% at RM1.58 today, bringing it to a market capitalisation of RM547 million.