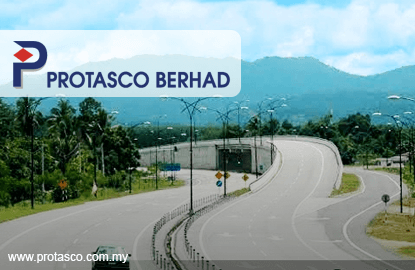 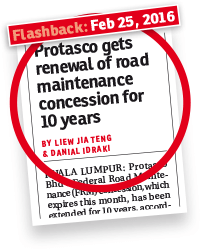 KUALA LUMPUR: Protasco Bhd has received an extension of 10 years for the concession to do maintenance work for the Peninsular Federal Road, with most of the tenure’s compensation to be on a performance-based contract.

Protasco’s filing with Bursa Malaysia yesterday confirmed the earlier article dated Feb 25 in The Edge Financial Daily which reported that the company would bag the contract renewal.

The construction firm announced to the stock exchange that it had received a letter from the federal government for the extension of concession for maintenance of the Peninsular Federal Road, good for 10 years.

The interim period of two years from Feb 17 this year to Feb 16, 2018, Protasco said, keeps the same terms and conditions of the existing concession. But the remaining eight years of the concession, which shall end on Feb 16, 2026, will be based on the performance-based contract model.

“The concession is expected to contribute positively towards the group’s results for the financial year ending Dec 31, 2016,” said Protasco.

The concession, which is believed to be covering 7,000km of roads in Terengganu, Kelantan, Selangor and Pahang, is expected to contribute a recurring income of up to RM250 million annually for the next 10 years, according to parties familiar with the contract.

The routine maintenance work will contribute a recurring income of RM130 million a year, while the periodic maintenance and emergency works will bring in additional RM100 million to RM120 million annually, depending on the actual work being carried out, sources told The Edge Financial Daily earlier.