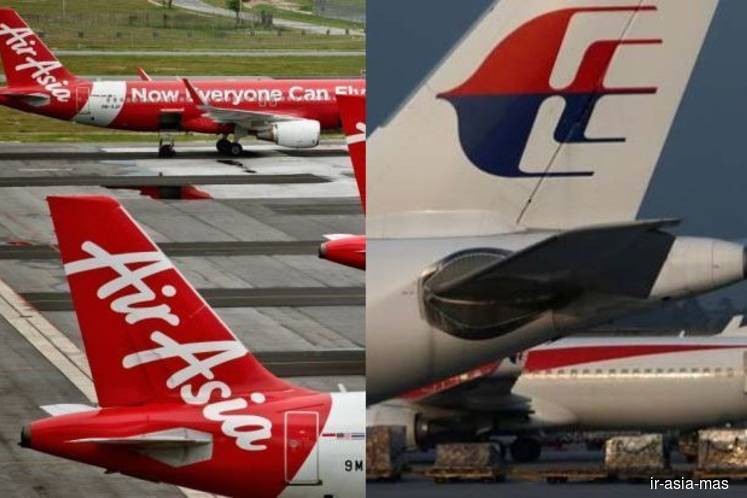 While the national carrier is still ailing financially, at least four individuals, including AirAsia Bhd executive chairman Datuk Kamarudin Meranun, are believed to have made some trading profits out of the proposed share swap deal between the substantial shareholders of then Malaysia Airline System Bhd (MAS) and AirAsia Group Bhd. The share swap plan was supposed to revive MAS but it did not take off.

KUALA LUMPUR (April 12): While the national carrier is still ailing financially, at least four individuals, including AirAsia Bhd executive chairman Datuk Kamarudin Meranun, are believed to have made some trading profits out of the proposed share swap deal between the substantial shareholders of then Malaysian Airline System Bhd (MAS) and AirAsia Group Bhd.

The share swap plan was supposed to revive MAS but it did not take off.

The Securities Commission Malaysia (SC) today announced that four individuals have been found to have bought MAS shares while in possession of insider information in August 2011.

Kamarudin, who currently holds a 32.18% stake in AirAsia, last Tuesday entered into a RM3.64 million settlement with the regulator for buying 5.66 million MAS shares in August 2011, said the regulator in a posting on its website.

The co-founder of AirAsia agreed without admission or denial of liability to settle a claim that the SC was proposing to institute against him for the share purchase between Aug 1 and 5, 2011 through the account of Nor Ashikin Khamis’ and Malizan Mahmood whilst in possession of inside information contrary to Section 188(2) of the Capital Markets and Services Act 2007 (CMSA).

The settlement was reached following letters of demand sent by the SC pursuant to its civil enforcement powers under the securities laws.

The amount disgorged from Kamarudin is equivalent to three times the difference between the price at which the shares were purchased and the price at which the shares would have been likely to have been acquired at the time of the acquisition, if the information had been generally available. The monies recovered will be applied in accordance with section 201(7) of the CMSA, according to the posting the SC has put up on the website.

Wong also entered into a settlement with the SC amounting to RM573,150 for the same offence. He was noted to have acquired 800,000 MAS shares in July 2011. According to Reuters, CIMB was the adviser for the share swap deal.

If not for the settlements, the SC would likely to have brought the matter to court for civil suits.

The insider trading is believed to have been linked to the proposed share swap deal that was unveiled in August 2011. MAS share price was on a roaster coaster ride then and its share price soared by as much as 28% in the days following the news. But the rally was short lived and the price then drifted lower.

To recap, in 2011, shareholders of MAS, AirAsia and AirAsia X Sdn Bhd (AAX) had proposed to enter into a share swap deal, originally intended to lend a helping hand to the loss-making national carrier.

The agreement involved Khazanah Nasional Bhd (controlling shareholder of MAS) and Tune Air Sdn Bhd entering into a share swap agreement so that there will be cross-holding of shares resulting in Tune Air obtaining a 20.5% stake in then-listed MAS and Khazanah obtaining 10% in AirAsia.

Kamarudin and Tan Sri Tony Fernandes are the owners of Tune Air.

Both airlines also entered into a comprehensive collaboration framework. It was agreed that MAS was to be a full-service premium carrier, while AirAsia and AAX would be regional low-cost and medium-to-long haul low-cost carriers respectively.

This was done in order to synergise the two Malaysian-based airlines and reduce competition against the national carrier.

However, due to public outcry, the share swap deal was aborted eight months later. It also faced strong resistance from MAS workers' union due to fear of job cuts.