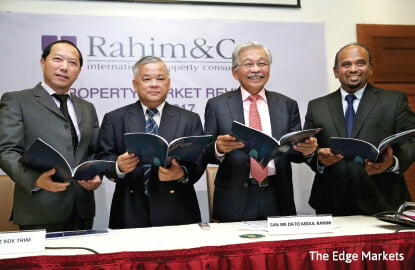 +A
This article first appeared in The Edge Financial Daily, on February 17, 2017.

KUALA LUMPUR: Rahim & Co said it expects the Malaysian property market to see recovery within the next year or so, forecasting property transactions to grow approximately 10% over the next 24 months.

The property consultancy firm’s director, Sulaiman Akhmady Mohd Saheh, said although the market had been declining since it peaked in 2012, the rate of decline in transactions is seen to be slowing down.

Meanwhile, the quarterly value of transactions dropped to RM31.8 billion from RM35 billion per quarter.

While 2017 would still be a slow year for the property market, Sulaiman noted that the rate of decline has been slowing down.

“The market will be slowing down its decline in 2017, and we hope that within the next 12 to 18 months, it will halt its decline. It’ll gradually pick up from there on,” he said.

He explained that the local property market sees a dip every 10 years and remains subdued for about two to three years before rebounding.

“I am very confident of Malaysia’s economy. In spite of what has been said, I think the economy will recover. Oil prices are also stabilising, which is encouraging. I am confident that we will come out of this subdued position within the next 12 to 18 months.

“I would say within the next 24 months, there would probably at least be an increase of about 10% in terms of transactions,” he said.

Commenting on the outlook for residential properties, Rahim said those priced above RM5 million — the high-end properties — will not see an increase in prices. If anything, he said, there is potential for a 5% drop in rentals or prices.

However, he said, affordable houses priced below RM500,000 could see an increase in prices, amid strong demand.

“There is not much supply of affordable houses. It’s not sufficient. There will continue to be pressure and demand for these houses, which is why PR1MA (1Malaysia People’s Housing Programme) is coming in to increase the supply of these houses,” he said.

For the commercial side of the local property market, Abdul Rahim pointed out the oversupply issue, highlighting that about RM15 million sq ft of office space will be coming online within the next two to five years.

“Now this is worrying because occupancy levels of offices have dropped [to] below 80%. If the owner of a building cannot rent the balance 20% of the space, there will be some cash flow problems.

“On the positive side of that, the rentals of these office spaces are not going to go up anymore,” he said.