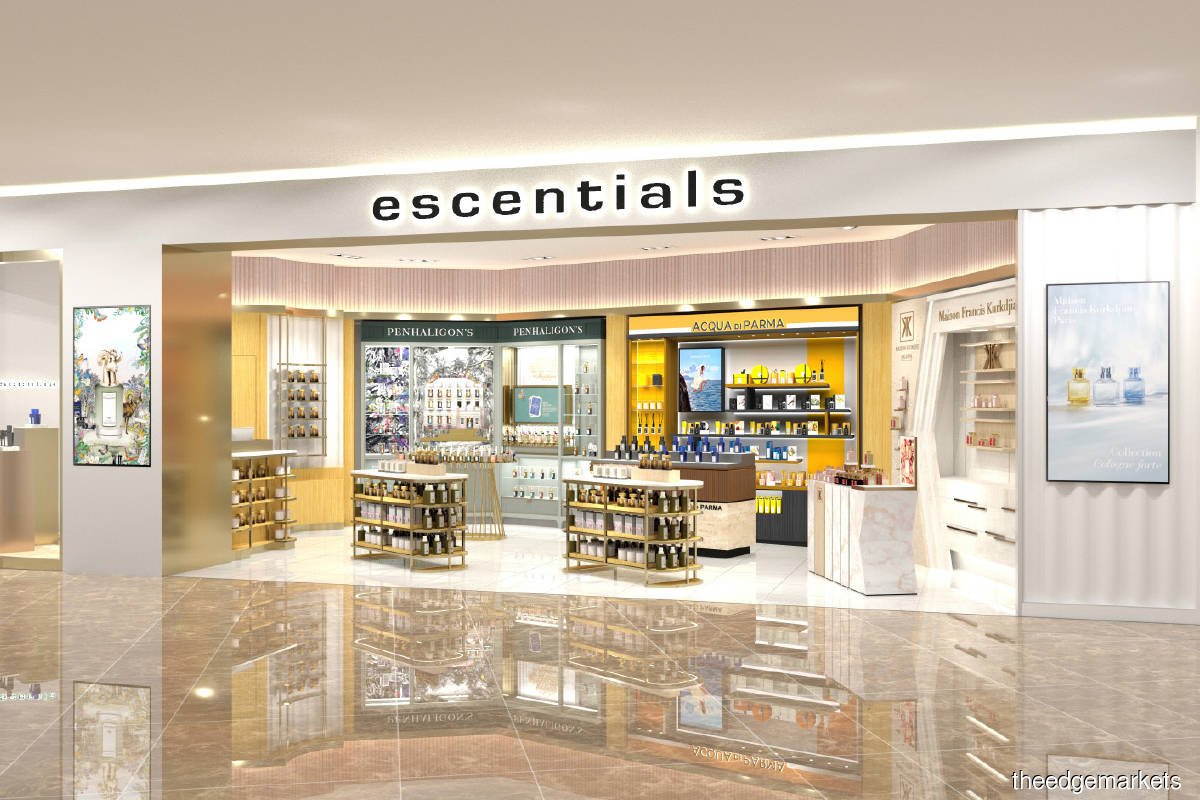 BUCKING the trend, Singapore-based Luxasia will open an Escentials store in Suria KLCC, Kuala Lumpur, next month to take advantage of lower rents at prime locations.

Luxasia, the leading omnichannel distributor and retailer of luxury beauty in Asia-Pacific, plans to commence operations at a time when the economy is picking up and retail is on an upward trend, after months of movement restrictions, owing to the Covid-19 pandemic.

Escentials has an established footprint in the Singapore market and has picked Malaysia as its first stop in its expansion outside the island. The 15-year-old brand is Southeast Asia’s only multi-label niche and cult beauty omnistore concept, where brands are made available on both offline and online platforms.

Luxasia’s move — amid reports of long-established stores shuttering for good — comes at an opportune time for expansion because of strong demand from consumers, group CEO Dr Wolfgang Baier tells The Edge in a recent interview, noting the high spend on luxury items in the region and the trend to trade-up.

“Luxasia is using this opportunity to grab prime locations at a much lower rent, as a number of retailers, brands and distributors have vacated their spots because of the pandemic,” Baier says, adding that the decision was made after a calculated analysis of the benefits against the downside. Baier: Luxasia is using this opportunity to grab prime locations at a much lower rent (Photo by Luxasia)

“Malaysia is the right place as the first step for Escentials in its regional expansion and to build its direct-to-consumer channel, owing to an increase in consumer sophistication, an increase in mobile and internet penetration and a fast-growing middle class.

“Consumers are also trading up; there is a growing appreciation for ultra-luxury and niche products as well as an acceleration of e-commerce growth.”

Luxasia has been in Malaysia for 35 years and is involved in retail, e-commerce and distribution. It distributes nearly 70 of its 120 brands to department stores such as Parkson and Sogo, chain stores including Sephora and Sasa as well as established e-commerce marketplaces such as Lazada, Shopee and Zalora.

Bvlgari, Hermes, Ferragamo, Coach, Mont Blanc and La Prairie are some of its popular luxury brands.

The Escentials' physical store and online store escentials.com.my will be launched on Nov 2.

Luxasia’s chief commercial officer and regional managing director Karen Ong tells The Edge that the first outlet will be a modest-sized store offering a portfolio of eight brands — Penhaligon’s, Bjork & Berries, By Terry, Maison Francis Kurkdjian, Acqua di Parma, Bvlgari, Van Cleef & Arpels and Amouage. These brands will offer a range of products across the categories of fragrance, skincare, make-up, bath and body, and home.

Ong describes the brands’ target market as consumers who are well travelled and discerning when it comes to taste in beauty. Since consumers can no longer travel and discover these brands overseas, Escentials is bringing the offerings to them.

The target market is also a growing group defined not by their income but more by self-expression, such as trendsetters or those who want to be the first to talk about these offerings on social media. Ong: The infrastructure and backbone were ready, and so we were able to pivot very quickly (Photo by Luxasia)

While many retailers adopted e-commerce in a big way only after the outbreak of the pandemic, Luxasia had the advantage, as it made plans for e-commerce adoption five years ago. “The infrastructure and backbone were ready, and so we were able to pivot very quickly and capture the growth from e-commerce despite the challenges in bricks-and-mortar retail,” Ong says.

Being ahead in its e-commerce preparedness paid off, as Luxasia Malaysia saw a rewarding 700% jump in sales in both beauty and non-beauty categories (for example, online Lego distribution), with beauty seeing a 310% year-on-year growth in 2020, driven mostly by sales on platforms such as Lazada, Shopee and Zalora. E-commerce now makes up 20% to 30% of the total business here.

Baier expects the online habit to continue even after physical stores reopen, as consumers have been accustomed to this practice after 1½ years.

Ong believes that, within the first 12 months of Escentials’ operations in Kuala Lumpur, the group can reasonably expect online sales to comprise 15% to 25% of the business. This share is expected to increase over time. “Now, having the confidence that things will bounce back, as consumer demand is there, we are making calculated bets on investment in bricks and mortar again,” Ong says of the upcoming opening.

In Singapore, during the months when the three Escentials stores were shut because of a lockdown, 60% of its revenue came from e-commerce. Now, it accounts for 20% to 30% of sales. To be clear, during the pandemic lockdown, growth in e-commerce sales helped cushion any potential loss because of retail outlet closures.

Citing Euromonitor International, Ong says the premium segment of Malaysia’s beauty market (excluding mass beauty and personal care) is estimated at US$600 million (RM2.5 billion) now and projected to expand north of 6.5% this year, and to enjoy a compound annual growth rate of 8% for the next five years. Skincare is expected to be the fastest-growing segment with a CAGR of more than 10%, 6% for colour cosmetics and 3% for fragrances.

Luxasia found that, during the pandemic, sales of its skincare range increased as people stayed home and opted to pamper themselves, as did sales of home fragrances such as home scents, diffusers, and candles as consumers chose to improve their environment, as did sales of haircare and bath and body products.

Already, all 15 markets in which Luxasia has a presence, including Malaysia, are seeing a strong bounce-back in sales across all categories, starting with skincare, followed by home, bath and beauty, fragrances and colour cosmetics.

Baier expects the group to see a rebound in overall growth in 2Q2022 as well as growth of 15% to 20% year on year in 2021, “but we strive for at least double-digit growth”. Nevertheless, Luxasia is cautiously optimistic. “There will no doubt be growth compared to 2020, but perhaps in the high single digits or low double digits,” he says.

As for Luxasia’s performance in Malaysia, Ong hopes to double the business in three years from next year. “Therefore, we need to grow in double digits every year from 2022.”

Looking ahead, Luxasia hopes to take the Escentials brand to Thailand, Vietnam, Indonesia and the Philippines. It aims to open another three to four stores across Malaysia in the next three years and 10 stores in the region by 2024.