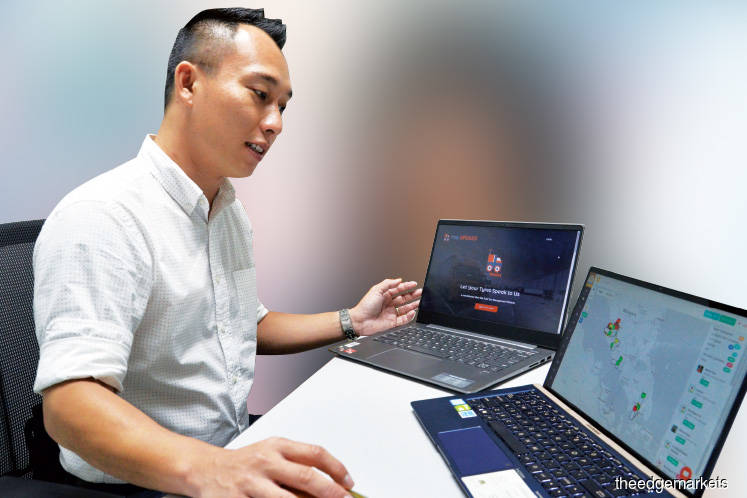 So, it is not just about the stock of tyres and when they expire, it is about the cash flow of the business. The more money companies put into items sitting on a shelf, the more money is wasted. - Woo

Companies that operate with commercial vehicles need to constantly check and change the tyres, which is not easy to do and not cheap in times of emergency. Also, the need for regular maintenance can sometimes reduce a company’s operational efficiency, which will inadvertently affect its bottom line.

TyreSpeaks founder and CEO Jensen Woo and co-founder Wong Tze Kai realised that there was a gap to be filled and that with the right solution, they would be able to increase a company’s efficiency up to 20% — just reducing the downtime caused tyre changes and maintenance.

“When drivers go to the office and see that they require a tyre change, the owners of the business will ask them to take the vehicle to a tyre shop to have it fixed. This is done during the drivers’ paid hours, so a few hours of the day that could be used to deliver goods, for example, are wasted,” Woo explains.

“If their vehicle breaks down and the drivers engage a freelancer or a tyre shop operator who is not their regular one, it may take a while — sometimes hours — for a serviceman to arrive.”

Woo has more than a decade of experience selling tyres while Wong is an IT entrepreneur. They met in 2017 and decided to combine their expertise to come up with a solution to bridge this gap in the industry and create new opportunities in the gig economy for freelance mechanics and tyre specialists.

TyreSpeaks was set up in January 2018 after a year of R&D. The on-demand mobile service provides tyre solutions to businesses with commercial vehicles such as logistics companies as well as to port operators, which use cranes and terminal trackers. The concept is similar to the one used Grab: a stranded driver can gain access to the TyreSpeaks platform and request a tyre change wherever he is.

The platform is global positioning system

(GPS)-enabled. So, all the driver needs to do is contact his office and someone will request a tyre change on the TyreSpeaks platform, which will then connect to freelance tyre specialists who are near the driver’s location.

The platform also allows drivers to schedule maintenance works to be done before they get to work. This reduces their time spent at a tyre shop and increases the company’s operational efficiency and output.

“Trucks can be serviced before the drivers clock in. So, when the drivers start their shift, they can

immediately begin their journey as they do not need to wait for their trucks to be serviced,” says Woo.

“Through the use of the platform, the driver’s company will be able to check on the progress of the job the mechanic or trooper while the driver will know how far away the trooper is. These are all trackable and reports can be provided too.”

“We have been focusing on tyres because of the everyday incidents involving tyres. Tyres are changed every day in this industry and we are disrupting the market because our fleet actually goes to the vehicle to change or fix its tyres,” says Woo.

“Part of our service is that we use our troopers to monitor the thread depth of our clients’ tyres so that when the time comes for a change, we can schedule it through our platform. A job is deployed to our troopers, who will go to the location to do the job. This is very different from what is being done in the industry at the moment.”

TyreSpeaks currently has nine troopers on its team, five of whom were crowdsourced. The idea is for the platform to be like a service-on-demand for mechanics so they can earn additional income freelancing with the company.

“We can link up with many other transporters. So, freelance mechanics can even accommodate non-tyre breakdowns. For instance, if it is something our troopers cannot do, we will link up with the mobile mechanic to take care of the request. It could be something like fixing the wiring of the vehicle,” says Woo

The company does not own a workshop or storage facility because tyre supplies are predictable and can be ordered as needed, based on the in-app maintenance forecast feature. Instead, it shares space with some of its clients to keep an emergency supply of tyres.

Prior to TyreSpeaks, companies needed to store tyres on-site, says Woo. This was costly because they needed to pay for the stock up front and find a space to store  it, as well as hire a storekeeper to look after the tyres. With TyreSpeaks, they can track when tyres need to be changed and only order what they need.

“When a company stores tyres, there is the issue of some of them going missing. Tyres have expiry dates as well,” says Woo.

The TyreSpeaks platform can be used to keep track of the stock. The process starts knowing who is asking for what kind of job and then sending a trooper to that place. From there, the trooper will go to the nearest storage space to pick up tyres. The platform provides transparency on where each tyre is stored.

“At the end of the job, the trooper has to fill out a form via the app. The information is sent back to the platform. We then verify the information using the system. That is how we prevent theft. We key in the tyre’s serial numbers and these are automatically matched to our back-end stock system,” says Woo.

“The idea is to make use of idle capacity. You want to make sure that your resources are fully optimised. So, it is not just about the stock of tyres and when they expire, it is about the cash flow of the business. The more money companies put into items sitting on a shelf, the more money is wasted.

“What we provide is virtual stocking. The stock is not theirs but because we bring it to them, it is as if it is always there.”

TyreSpeaks still has a long way to go, but it is becoming clear that the company will expand into e-commerce. Customers are already asking for things such as batteries, oil filters, spare parts and even engine oil to make for a holistic service.

“We are already preparing for our next move and we are talking to battery suppliers such as Century, which is very excited about this new area of growth because it usually sells batteries through workshops. We are also talking to engine oil suppliers and should start rolling out these services this year, in addition to the tyres,” says Woo.

TyreSpeaks aims to grow its presence in Malaysia and eventually expand to other countries in the region. It penetrated the Singapore market last year and plans to get into Indonesia next.

“We have made some inroads in Indonesia and are in the midst of setting up a strategic partnership with someone there, which will give us access to one of the truck dealers in that country,” says Woo.

TyreSpeaks has yet to have a presence in Sabah or Sarawak, but Woo has been looking for prospective customers there in the light of the construction of the Pan-Borneo Highway, which is aimed at increasing industrial activity in the two states.

While the TyreSpeaks platform has been quite well received in Malaysia, there have been some challenges too. For starters, the older mechanics and workshops may not be tech savvy enough to understand its value proposition.

“The older generation may not be able to adapt to these technological elements, but second or third generation owners may be more open to this technology, which will allow them to have better visibility of their stock and operations,” says Woo.

Another challenge is getting good quality troopers. The company is trying to increase its network to 50 troopers.

Woo says the company sources trained tyre technicians from independent workshops and puts them through a programme to teach them how to use the TyreSpeaks app. “From what we know, there are at least 100 freelance or independent tyre technicians in Malaysia. We want to give them an opportunity to belong to a platform to provide their services and earn a decent income.

“being part of our platform, they can be assured that they will receive jobs, rather than just waiting around — sometimes for the whole day — for one job or even none at all.”

TyreSpeaks is currently undertaking its Series A fundraising. The founders feel that now is the right time to seek external funding as the company has been self-financed for the last three years. “With market acceptance, it is time for us to accelerate,” says Woo.