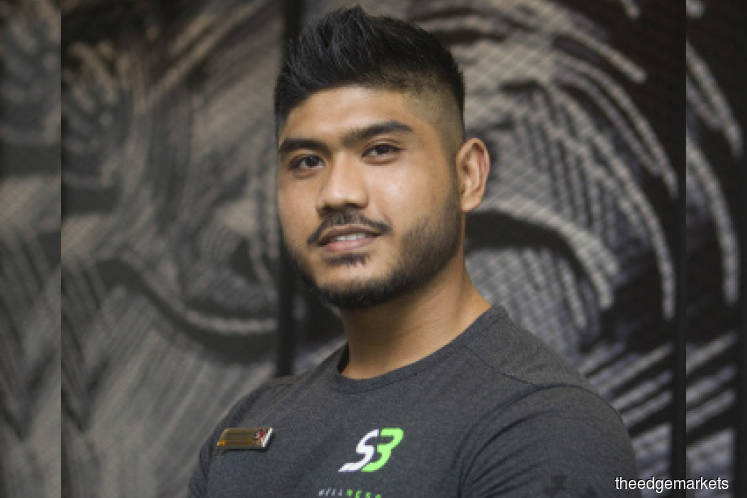 It is also about humility and the willingness to learn because many in the commercial fitness industry do not achieve growth despite having worked for a long time due to their egos. They do not want to admit that they have more to learn and are too proud to ask questions. > Syazan

Syazan Basil was living out of his car. The 22-year-old fitness instructor had quit his job at a commercial gym to participate in SME Corp Malaysia’s three-week Tunas Usahawan Belia Bumiputera (TUBE) programme — for which he would be paid RM15,000, but only after three months.

Fortunately, he had managed to convince a client to retain his services. So, he had some cash to keep him going. But it was not enough for rent or his car loan. He had to move out of his room and lived out of his car for a few days before he swallowed his pride and knocked on the door of his married sister to beg for a place to stay until he could get back on his feet.

Ever the optimist, Syazan — who aced the TUBE programme and was selected to lead a team of 135 people despite being the youngest participant (and given a cash prize of RM1,000 on top of the RM15,000 grant to boot) — knew that he would come back stronger. “I told myself that hard times did not last and that it was all part of the process,” he recalls.

Syazan was not unfamiliar with adversity. Before becoming a personal trainer, he had dropped out of college because he could not afford to complete the papers for his Association of Chartered Certified Accountants (ACCA) certification, with which he had hoped to become an accounting technician.

“I only managed to pass two out of the nine papers because I did not have enough money for the fees and neither did my parents. So, I took a risk and started working as a personal trainer because fitness had been my passion since I was 15,” he says.

Clearly determined and willing to work hard, Syazan became the top personal trainer at a commercial gym three months after he started working, without any personal training (PT) certification. “During my stint at the gym, apart from the training, I also learnt about sales. It was there that I realised there was a lot of hard-sell in the commercial fitness industry,” he says.

Syazan noticed that many personal trainers who were tied to chain gyms would still scout for clients externally and train them in the comfort of the gyms at their own condominiums. So, he realised there was a gap in the market — most condos had gyms, but nearly none of these came with personal trainers.

“There are prospective customers there because most people who live in luxury condominiums can afford to pay upwards of RM1,000 per month for PT sessions. Whereas at commercial gyms, every member pays about the same in monthly charges, but we do not know their spending power. However, if we go to luxury condominiums, it is easier to look for clients,” says Syazan.

He had always wanted to start his own business. So, when he found out about the TUBE programme, he jumped at the opportunity. But it also meant that he had to quit his job as only those without full-time employment were eligible to participate.

“At that point, it was a risky move because I needed monthly disposable income to pay rent and service my car loan, not to mention other commitments. The participants of the programme would be able to take home RM15,000, but only three months after the programme ended,” says Syazan.

He sought advice from one of his PT clients whom he considered a business mentor and the man encouraged him to go for it. His mentor also promised to pay him a month’s salary so he could sustain himself during the programme.

After the programme, Syazan was prepared to start a gym management services company, but he had to wait for the funding promised by SME Corp. Not able to sit still, he borrowed RM550 from a friend and kick-started SB Wellness Sdn Bhd.

“The money was for a table and a bunting. I set up a booth at the gym of a luxury condominium to get PT clients. That was it,” Syazan laughs.

He also sealed a deal with the condominium’s management company. “It was very risky. At that point, the gym was not ‘activated’ yet, which meant that although there were people using it, it was not lively,” he says.

“I was still living with my sister and it was mentally challenging. But I needed to be strong, so I kept looking for clients. I had to bear in mind my mentor’s advice that if you do the right things with patience, the opportunity will come.”

Breaking even was a breeze. In the first month, Syazan managed to bring in RM10,000 worth of sales.

He started recruiting trainers in September last year. The first person he approached was a trainer of personal trainers who held an executive position at the gym he had worked at. Hiring her augured well for his budding business as she was considered one of the best in the industry. On top of that, she would be able to rope in three more reputable trainers.

“She was earning a high salary at the gym chain, but I managed to convince her to join SB Wellness, mainly because it was not solely a profit-driven venture — it is to help people do the right things to change their lives for the better,” says Syazan.

“I told her I could not match her previous salary, but promised her that for every 10 PT clients she secured, the profit from the first five would go to her as basic salary while the other half would go to the company.”

He adds that clients were charged RM120 per session.

How does the business work? SB Wellness secures yearly contracts from the management companies or joint management bodies of luxury condominiums to manage their gyms. In addition to offering PT packages, the company also provided gym consultation services.

The business model works well as the company does not have to pay rent for doing business at the gym. In fact, the company is being paid to maintain it. But that is not to say managing the business is a walk in the park.

“It is a low-cost business, but it does not mean it is easy. Unlike in malls or commercial areas, it is quite difficult to do business in residential areas due to the lower traffic or footfall. The key is implementing core values and avoiding hard-sell techniques,” says Syazan.

He adds that the values are integrity, honesty, generosity, openness between team members, being customer-focused and helping people improve their lifestyles — as opposed to merely focusing on muscle-building and fat loss.

“It is also about humility and the willingness to learn because many in the commercial fitness industry do not achieve growth despite having worked for a long time, due to their egos. They do not want to admit that they have more to learn and are too proud to ask questions,” says Syazan.

“I always remind my fellow trainers that these are our values and encourage them to implement them on a daily basis because all of us will benefit from practising these, including our customers.”

He says many gyms in condominiums and residential areas are not “activated”. So, when the equipment is not maintained, it becomes rusty or fails to function.

“We also add value to properties or real estate projects. Whenever agents want to sell a unit, the gym is part of the selling proposition,” says Syazan.

“Property developers consult us to help them design gyms for their upcoming projects. We were receiving a lot of calls from developers and management companies, but I could not expand that quickly and hire just any trainers.

“It is not easy to get the right people who are aligned with our core values. If we are driven by money, then we can scale up anytime. But we are not.”

Syazan believes there is a growing number of people who are aware of the importance of fitness or physical health and this is driving the growth of the fitness industry. But commercial chain gyms, which often tie their customers to yearly contracts, are losing traction.

People prefer going to boutique gyms and start-ups such as Classpass and KFit are promoting them because they allow more personalisation and less commitment, says Syazan. Apart from flexibility, the founders of and trainers at these boutique gyms often forge closer connections with their customers.

“The owners or founders themselves are very involved in the day-to-day operations of their gyms, unlike the bigger and more commercial gyms. Additionally, these founders also use social media to spread awareness and set examples of how to improve their lives in terms of wellness,” he says.

Following this trend, there are two innovative elements that are part of the company’s foundation: the business model (two income streams) and the training module. Syazan explains that each client is given a free assessment to examine their posture and ability to perform basic movements.

“A lot of people who appear able to do certain movements are doing them in unsafe ways, affecting their posture and causing injury. It is only when we know their physical capabilities and limitations that we progress to a strength programme,” he says.

“Clients are drawn to this aspect of our training style because they would not need to go to a chiropractor or physical therapist before embarking on a training programme.”

Syazan places so much emphasis on fixing postural issues before introducing any fitness programmes to clients that he poses posture-related questions to prospective hires. “One of the first questions I ask them is, ‘What could be the reason for a client’s inability to perform a basic squat?’ If they give me the correct answer, which is ‘the tightness of hamstrings, ankles or glutes’, then they are good to go,” he says.

“Everything else is easier for them to learn on their own. A lot of trainers skip this part because it is difficult to master. You need to read a lot and watch a lot of videos.”