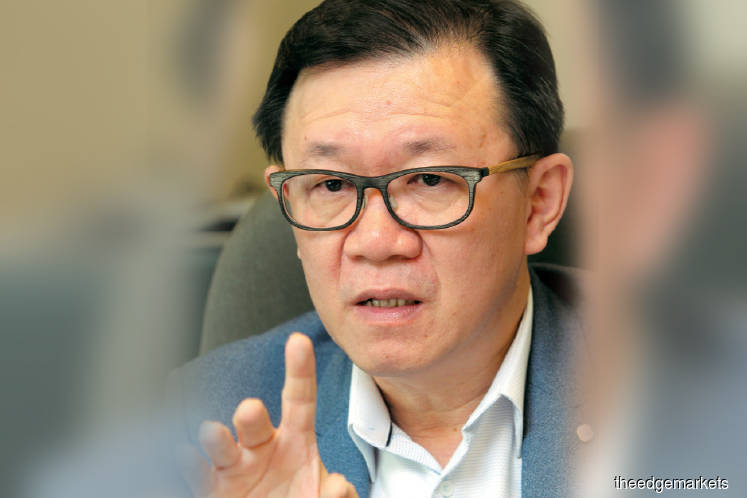 KUALA LUMPUR: Think tank Socio-Economic Research Centre (SERC) has lowered its private investment growth forecast for 2018 by more than half to 3%-4%, from the earlier estimate of 8.3%, its executive director Lee Heng Guie says.

The main reason for the cut is to reflect the “wait and see” approach by both domestic and foreign investors to the new government’s policy directions, including the ongoing review of mega infrastructure projects in the country and potential catalysts in Budget 2019, he said. Lee noted Malaysia saw a sharp pullback in private investment growth in the first quarter of this year (1Q18) to 0.5% versus 9.3% in 1Q17.

“Hopefully, things will be clearer when the government tables Budget 2019 [on Nov 2], more so after our prime minister’s visit to China [next month],” Lee told a media briefing by SERC on current global and domestic economic conditions yesterday, referring to Prime Minister Tun Dr Mahathir Mohamad’s upcoming  visit to China to raise the issue of “unfairness” in some infrastructure contracts agreed to by the previous administration with China.

Nevertheless, Lee remains confident the government will achieve its targeted fiscal deficit of 2.8% of gross domestic product (GDP) this year as it rationalises its expenditure.

“Austerity drives can unleash confidence,” he said, adding that the government has made clear its fiscal plan to put deficit and public debt firmly on a downward path. In May, Finance Minister Lim Guan Eng announced the federal government’s  debt and liabilities amounted to RM1.087 trillion or 80.3% of GDP.

Lee said if plans for fiscal and debt consolidation are credible and involve structural reforms, there is every chance growth can resume even amid cuts or rationalisation of public spending. “The fiscal condition that we are in now is not about acute austerity in spending, but more of rationalising or reprioritising the capital expenditure and operating spending,” he added. This, Lee said, is because cost savings and expenditure efficiency from value-for-money projects could mean wider economic and multiplier impact on the economy.

SERC also cuts its full-year GDP estimate to 5.2% from 5.5% previously, blaming impact from external headwinds and implications of domestic political and policy transition.

Lee warned that the reintroduction of the sales and services tax in September and its net impact on the prices of goods and services may take away some spending strength. “Consumer spending will still be calling the shots [in the second half of this year (2H18)]. Private consumption resilience held intact on improved income growth and stable labour market condition [in 1H18],” he said.

Malaysian private consumption grew 6.9% in 1Q18, versus an average growth of 6.5% in 2017, while unemployment rate was 3.3% between February and April.

Lee said the three months of “tax holiday” due to the zero-rated goods and services tax between June and August, together with the payment of cost of living aid and fuel price stabilisation, is expected to keep consumer spending growth steady.

The think tank also cut its export growth estimate for 2018 to 6.5%, from 7.5% previously, amid concerns over the US-China trade war. The estimate is less than half the 18.9% export growth seen last year. “The ride ahead for Malaysia’s exports is likely to be bumpy given the risk of trade tensions between the US and China, as well as the US’ allies impacting the technology sector, automobile, steel and aluminium industries,” said Lee.

He expects the trade war to inflict damage on global economy and trade. While Malaysia will also be affected via global supply and value chains, Lee thinks the impact will be manageable.

“No one will be spared ... the key now is to assess whether the war would become worse or not.

“But as long as we (Malaysia) get our fundamentals intact, I don’t think we have to raise interest rate like Indonesia to defend our currency,” Lee said.

The “biggest trade war in economic history” began last Friday, with the start of new US tariffs on US$34 billion (RM136.34 billion) worth of Chinese products, along with China’s retaliatory tariffs on US products. US President Donald Trump’s administration has threatened more tariffs ahead, on imported automobiles and auto parts.

Like most economists, SERC expects Bank Negara Malaysia to leave its benchmark interest rate unchanged at 3.25% at the Monetary Policy Committee today, after taking into account the external uncertainties as well as domestic politics and policy transition.

On the ringgit, Lee said factors such as the political and policy transition after the 14th general election, net selling of domestic equities and bonds, surging US Treasury yields and US interest rate hike concerns are weighing on the local currency’s appreciation.

“What could provide a counteracting strength to support the ringgit are strong economic and financial fundamentals, the clarity of policies, the fiscal and debt path and the affirmation of Malaysia’s sovereign ratings,” he said.