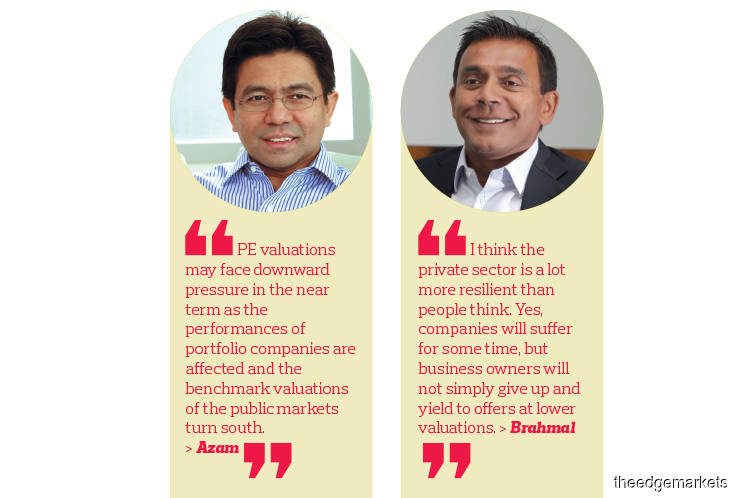 Southeast Asia’s private equity (PE) scene is in for a challenging year as portfolio companies wrestle with cratering demand and stretched balance sheets. While these companies will likely suffer sharp losses in the near term, the asset class is expected to fare better than the public equity markets.

COPE Private Equity founder Datuk Azam Azman tells Personal Wealth that the industry will not experience the same volatility as the public markets because private market valuations are only done periodically. “PE valuations may face downward pressure in the near term as the performances of portfolio companies are affected and the benchmark valuations of the public markets turn south.”

Having said that, using Asia-Pacific’s emerging PE scene as a proxy for Southeast Asia, the asset class has historically outperformed stocks — a trend Azam expects to continue. He cites data from Cambridge Associates, which demonstrates that the returns for Asia-Pacific emerging PE and venture capital outperformed the MSCI Emerging Markets Asia Index over 5, 10 and 15 years as at the third quarter of last year.

Azam’s assessment of falling future PE valuations is also backed by precedent from the 2008 global financial crisis. Data from the Asian Venture Capital Journal (AVCJ) reveals that both exit value and count dropped sharply in 2008 and 2009 before staging a strong comeback the following year.

In any event, the Covid-19 pandemic could not have come at a worse time for Southeast Asia’s PE scene. Overall deal and exit values had already been in decline for a number of years, according to AVCJ findings.

The region saw a record investment deal value of US$15 billion in 2017, before gradually declining to US$12 billion in 2019. Exit values fell more precipitously, from a record of US$18 billion in 2017 to just US$4 billion last year. In Asia-Pacific more broadly, data from AVCJ and financial data provider Preqin, also compiled by Bain, revealed a year-on-year decline in deal values since the highs of 2018. The decline was even sharper in terms of Asia-Pacific exits, with total exits falling from a high of US$149 billion in 2018 to just US$85 billion a year later.

Looking ahead, experts by and large agree that 2020 will mark another disappointing year for PE in this part of the world, with a recovery only expected to take hold either at the end of this year or in 2021.

Experts who spoke to Personal Wealth broadly agree that the post-Covid-19 investment landscape will look very different from the heyday of the last few years. An obvious starting point would be fundraising.

It is likely that investor allocations to PE will slow down or even grind to a halt, owing to what Azam calls the “denominator effect”. This happens when an investor’s allocation to this asset class increases as a percentage of his overall portfolio due to the declining value of the public markets.

“This results in the investor being temporarily over-allocated to PE. I expect that the denominator effect will prevail until such time that investors allocate additional capital to the asset class, considering the possibility of opportunities in quality distressed assets and other prevalent opportunities,” he explains.

Creador founder and CEO Brahmal Vasudevan concurs, saying that the economic shutdown will have other knock-on effects on the asset class. “PE firms that recently started or are in the midst of raising new funds will struggle because their investors are also suffering right now. The public markets are down and investor allocations have been thrown off, so it will be harder to raise funds all around right now.”

The drop-off in fundraising, however, is expected to be bolstered by existing dry powder in the PE ecosystem. There will be no shortage of investment capital for when activity picks up again as GPs are sitting on a record amount of dry powder, built up over the last few years. In Asia-Pacific alone, dry powder at the end of last year was 331% higher than in 2008.

Fundraising issues notwithstanding, portfolio companies will come under increased scrutiny as and when the market gains visibility of the long-term economic impact of Covid-19 lockdowns. In this regard, Brahmal believes that companies will fall into any of these three buckets: minimal impact, adversely affected and those decimated by the pandemic.

“I am not referring specifically to Creador’s portfolio companies as this applies to all portfolio companies. For example, we have a breakfast cereal company in Indonesia, and a company like that will continue to grow because the product is a necessity. Then there are retail companies forced to shut down for a period of time. So, we will obviously lose some money in the short term,” he says. “The healthcare business has also been adversely affected. Much of the patient volume for follow-ups, check-ups as well as elective procedures and non-emergency surgeries would have been delayed. People are understandably reluctant to visit hospitals and there are some very well-known private hospitals that have suffered an 80% drop in patient volume over the first few months of the Movement Control Order (MCO).

“And then there are businesses that could potentially be decimated such as cinema chains, airlines, hotels and other hospitality businesses, as people will not be travelling in great volumes for upwards of a year.”

Upcoming investments will also come under the microscope. As the market continues to price in the full extent of the economic fallout, previously agreed-upon valuations will likely have to be reconsidered. Anecdotally, there are indications that the market believes there is good value in new PE investments right now. However, Brahmal believes it will be at least a year before valuations start to look attractive.

“I think the private sector is a lot more resilient than people think. Yes, companies will suffer for some time, but business owners will not simply give up and yield to offers at lower valuations. They will stretch out their reserves and, where feasible, borrow to keep their businesses going,” he says.

“Thus, I don’t think we will see very many distressed investments in the near term. It will probably be more than a year before prices really become attractive. In any event, we are not distressed asset investors and I hope most of these companies dig themselves out without ever going into distress.”

To this end, Brahmal believes that the end of the loan and financing moratorium in October will gradually reveal just how many businesses are still able to service their loans and, hence, continue operating over the long term.

PE firms will also find that exits will be incredibly difficult to achieve over the next year. On the one hand, Brahmal attributes this to buyers being cautious about committing funds right now. On the other, company performances are expected to deteriorate in the near term. “Buyers will compare the dismal profits this year to much stronger numbers in 2019 and they will question the valuations,” he points out.

“Over the medium term, there will be even more emphasis in the ecosystem on minimal disruptions during times of crisis. This can only be found in technology-centric opportunities, which historically have been the domain of venture capital. As a result, we will see some convergence of the two asset classes in the pursuit of increasingly tech-driven investment opportunities,” he says.

Sectors to look out for

Perhaps unsurprisingly, experts are nearly unanimous in their preference for technology-related investments. Indeed, as a public market play, the theme has outperformed over the last few months. Brahmal likes sectors involved in e-commerce, communications and digital transformation as these allow people to carry out business activities remotely.

In addition to these sectors, COPE’s Azam favours specific plays within the e-commerce supply chain. Themes such as data centres, logistics-related fulfilment and warehousing sub-sectors are all candidates to outperform in the long term. He believes that these sub-sectors will be the so-called “new normal” plays as consumers are likely to build long-term habits around online purchases.

Azam also likes factory automation providers. Companies operating in this space will be in demand in the manufacturing sector as social distancing measures are expected to be a standard operating procedure for the foreseeable future. “These companies will be able to ensure that manufacturers suffer no unscheduled interruptions to their production lines,” he says.

Azam is bullish on certain sub-sectors in the medical equipment and health-related fields as well. “Companies involved in glove and personal protective equipment (PPE) manufacturing, as well as those involved in the race to create an effective vaccine, will be interesting plays,” he says.

However, like Creador’s Brahmal,  Azam expects private hospitals to see a temporary reduction in elective surgeries as well as a drop in foreign patients.

Interestingly, China’s recent PE experience offers key insights into upcoming investment opportunities. The country has generally had a “first in, first out” experience insofar as the pandemic is concerned.

Seeing as the Chinese economy is arguably the first to have emerged from the pandemic in recent weeks, recent PE activity in the country could act as a short to medium-term proxy for investment themes in Southeast Asia. AVCJ data, as well as analysis by Bain, revealed that Chinese PE firms completed more deals in the internet, technology and healthcare sectors in March than in January and February combined.

For example, in what Bain characterises as Stage 1, or an emerging outbreak, PE will remain relatively focused on themes surrounding daily necessities, work and study. Contrast this with Stage 2, or a rapid escalation, where some of that earlier focus shifts to digital and indoor entertainment themes as large swathes of the population are confined to their homes.

As the economy moves into Stage 3, or the recovery and controlled reopening stage, investors will once again look at work and study themes while also looking out for themes related to indoor physical activities, as a means to replace riskier outdoor recreational and gym activities.