Private Equity: Challenges ahead for PE but opportunities remain 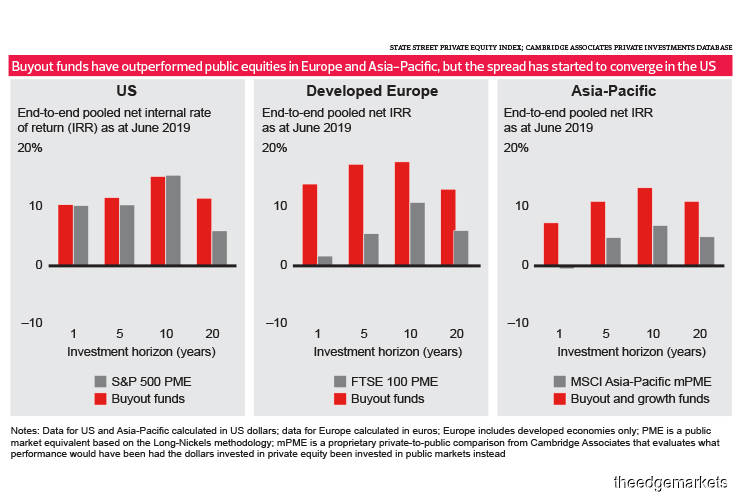 It will be a tough year for private equity (PE) managers as record amounts of capital flow into private markets and valuations reach a new peak. In addition, negative macroeconomic factors are making the global economic environment even more uncertain, says a recent report by Bain & Co.

According to the consulting firm’s annual Global Private Equity Report, investors poured US$894 billion into the private capital market last year, the highest in the last decade excluding 2017. PE accounted for 40% of total private capital, the highest level since 2006. Overall, the PE investment market saw its strongest six-year stretch in the industry’s history.

However, PE dry power (referring to committed but unspent capital) hit a record high of US$2.5 trillion in December last year. Valuations of companies have also been rising across all sectors. Over 55% of US buyout deals in 2019 had an EV/Ebitda (enterprise value over earnings before interest, taxes, depreciation and amortisation) purchase price multiple of more than 11 times, compared with about 20% a decade ago.

“PE investors had another strong year, but they had to work harder than ever for their deals to be successful,” says Hugh MacArthur, global head of Bain & Co’s PE practice.

This resulted in an interesting situation in the US. “Our research highlights a notable development in the US buyout market. For the first time, the returns of public markets and PE have converged over a 10-year period. This raises questions about how PE can stand out and remain attractive to investors going forward,” he says.

In other regions, PE still outperformed the public markets.

The anomaly in the US is due to its accommodative monetary and tax policy and the flight to quality as bad news flooded the European market. The US public market has also been on a bull run since recovering from the 2008 global financial crisis.

However, US equities are unlikely to sustain the double-digit returns over the long term, says the report. To stand out, PE firms must get smarter about choosing targets, develop sector insights, do due diligence and identify new ways to create value.

Even as PE’s outperformance is attracting record amounts of capital, the average returns have declined over time, according to the report. However, the top-quartile returns have held steady, which explains why most of the capital flowing into this asset class is targeting top-tier firms.

Why do they outperform the rest? The answer is in their focus, say the authors of the report. “The best firms know what they are good at and wield that as a competitive weapon. In a world of high prices and intense competition, they understand that expertise matters. You have to be much more focused on the sectors you are investing in, the risks you are underwriting and your ability to actually get the value once you own the asset.”

The consistent outperformers were either sector specialists, had a focused hunting ground, had differentiated playbook funds or were scale managers with broad expertise.

Some of the sector specialists highlighted are Thoma Bravo, Silver Lake and Vista Equity Partners in the technology space and Charlesbank and L Catterton in consumer-related companies. These firms can assess risk and opportunities in ways their competitors cannot.

Those with a focused hunting ground target a sweet spot with a repeatable investment approach, while not limiting themselves to a sector. For instance, South Korea-based MBK is a PE firm that invests in mostly mature companies across sectors in North Asia.

PEs with differentiated playbook funds know from pattern recognition what kinds of companies they can improve and how. A firm listed in the report is Clayton, Dubilier & Rice, which does exhaustive upfront due diligence and has strong collaboration between its deal and operating teams.

Scale funds capitalise on their size and breadth. They can bring massive resources to their investees and they often do the biggest and most complex deals. Blackstone, KKR and CVC fall into this category.

“They have teams of people with deep expertise and they have the staying power to wait out troubled investments that would otherwise go bust,” says the report.

While the technology sector is infamous for its high valuations, there are still opportunities there, say the authors of the report. That is because PE firms tend to avoid the most hyped tech segments and invest in the enterprise software sector instead, which offers strong growth and insulation against a downturn.

These companies are more resilient and have strong revenue growth and solid fundamentals as their customers are rapidly digitising to stay competitive. In addition, the sector has low levels of capital impairment because enterprise software solutions are crucial and hard to dislodge once installed. The opportunities to invest are also growing as innovations in cloud computing and mobile technology have expanded the pipeline of investees.

According to the report, hardware and consumer software stocks comprise 63% of the capital invested in public markets, whereas 72% of PE capital is concentrated in enterprise software and IT services.

In PE, returns from tech deals have outpaced those from non-tech deals, especially for software buyouts from 2010 to 2018.

“Valuations of enterprise software companies have risen over the past five years and their businesses are not immune to an economic slowdown. But these businesses tend to be more stable in a recession. While consumer-driven revenue can fall off sharply when the economy slows, B2B (business-to-business) customers are less flighty,” say the report.

The three high-growth enterprise software sectors identified in the report are cybersecurity, human capital management and DevOps (development and operations).

The cybersecurity sector is interesting due to the increasing number of cybersecurity incidents. The subsectors that command the most opportunities are endpoint security, managed security services and security operations.

Meanwhile, human resources executives are looking for new software solutions that can automate everything from talent acquisition to benefits and employee development. The report cites data from market intelligence firm IDC, which estimates that companies will spend US$90 billion on human capital management (HCM) software over the next four years.

This trend has promoted the growth of companies such as Workday, Ultimate Software and iCIMS. According to the report, the number of HCM buyout deals tripled to 12 last year from just four in 2015.

DevOps refers to tools that enable development and operation teams to work together and automate processes or create applications. This allows companies to be more flexible and work with modern IT infrastructure such as the cloud.

The number of deals in this area has increased fourfold since 2015 and the value of the market has grown 26% year on year since. The companies in this space include Dynatrace, an application performance management solution provider that went public in the US last year.

Profiting in the payments space

The payments sector has become a prime hunting ground for PE buyout firms. According to the report, the number of deals involving payments companies in North America and Europe grew 7% annually in the current cycle, compared with a 0.1% annual decline in deal count for the overall industry during the same period.

The returns have also been good. Since the 2008 global financial crisis, buyouts involving these companies have generated a gross pooled multiple of invested capital of 2.7 times, outpacing the technology, financial services and financial technology sectors.

Now, more disruptive trends are opening up new opportunities for PE investors. The three attractive areas are merchant services, integrated payments and the underserved B2B payments sphere, according to the report.

Merchant services refer to the payment process that enables a business to pull electronic payments from a buyer. Disrupters in this area are transforming the simple point-of-sale terminals by integrating these with business software or mobile devices. Notable companies in this area include Toast, Square and Harbortouch.

The B2B payments sphere involves the card issuer, historically a bank. Innovators have come to disrupt the debit and prepaid market by issuing virtual cards.

“A new generation of start-ups recognised that what business users really wanted was the ability to authorise payments in real time to address specific needs,” say the authors of the report.

“Virtual cards are single-use card numbers that can be issued on the fly. They offer a business an almost endless number of ways to customise a payment system to meet its specific needs. The issuer can define when the card can be activated, when it expires, how much the user can spend and the exact set of merchants at which the card can be used.”

This reduces fraud and foreign exchange fees on international transactions and can be pushed through e-wallets. Companies in this area include VPay, eNett and WEX.