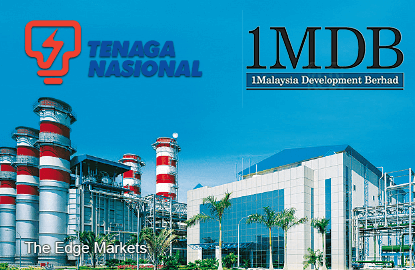 Besides investors' concerns that the state-controlled utility Tenaga's (fundamental: 1.3; valuation: 1.8) move could be seen as a bailout for 1MDB, analysts said the deal could further increase Tenaga's debt.

"We think the pricing of a deal will be closely watched by the market. Buying the power assets at the original investment cost (RM12bn) will likely be viewed as a bailout. That said, we take comfort in the arms-length manner in which Tenaga acquire the 70% stake in Project 3B from 1MDB.

"Moreover, the minority shareholders could also exercise their rights to reject an over-priced deal in an EGM to approve an acquisition," TA said.

Today, Public Investment Bank Bhd wrote in a note that while the purchase could be positive for Tenaga in the long term, the research house was neutral about the news proposal for now.

Public Investment said this was pending further updates on the price for 1MDB's power assets.

"Even assuming Tenaga gets an unlikely 50% discount for 1MDB's brownfield power assets which translates to about RM6bn and taking into account cost for Track 3B, we estimate Tenaga's net gearing will already double from around 30% to 60%," Public Investment said.

At a glance, investors appeared to be less optimistic about the proposal to buy 1MDB's local and international power assets, based on Tenaga's share price so far.

Tenaga shares had declined, despite the company saying Edra’s power assets would be a “strong fit” for the buyer's growth strategy. Tenaga said the group was in the initial stages of its assessment of Edra’s power assets and there was no assurance that any transaction would be concluded.

1MDB, which is wholly owned by the government, said in a statement yesterday that it welcomed Tenaga's interest in Edra as it forms part of the investment fund’s plan to monetise its power assets.

Besides Tenaga, 1MDB said it had also received indicative, non-binding offers from other local and global companies for 1MDB's power assets.