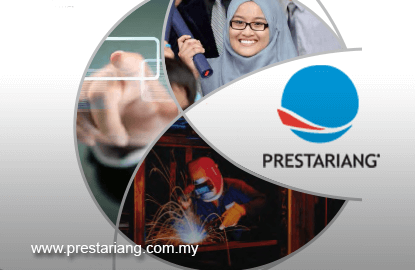 Prestariang's shares were trading between RM1.95 and RM2.14, making it the eight top loser on Bursa Malaysia.

Its share price has been on a downtrend since July 23, when it was trading at RM2.59, having retreated 64 sen or 24.71% for the period, underperforming the benchmark FBM KLCI's 2.15% decline.

Prestariang’s net profit for the six months ended June 30, 2015 (1HFY15) came in at RM9.1 million, down 32.3% from RM13.44 million in 1HFY14, making up 15% of consensus forecasts. The lower earnings was mainly dragged by softer margins from the software and services segment.

PublicInvest Research said despite being far below expectations, it expects a significant pickup in Prestariang’s earnings in the following quarters given the recovery of contributions from the IC Citizen and 3P programmes, which have started again in 2QFY15.

"Pending more clarification from the analyst briefing today, we continue to maintain our outperform call with an unchanged target price of RM2.76," the research firm said in a note to clients today.