DIAMOND and ruby-studded jewellery crafted by celebrated Italian master goldsmiths Mario and Gianmaria Buccellati, and inspired by Renaissance great Benvenuto Cellini, are going on show for the first time.

More than 130 pieces designed by father and son, including pearl scorpions, silver chalices as well as silk and gold evening bags, can be seen at the Pitti Palace in Florence, a stone’s throw from the Ponte Vecchio.

Mario Buccellati founded the company in 1919, drawing inspiration for his designs and gold-working techniques from Roman and Renaissance period artworks, creating a wealth of unique pieces sought after by popes and princesses alike.

He went on to open stores in Rome, Florence and New York and upon his death, the business was taken up by four of his sons — one of whom, Gianmaria, launched his own brand in 1971 and took dozens of young, budding artisans under his wing.

While the company has recently made efforts to capture a new, modern market by releasing jewel-studded covers for iPhones and iPads, this collection focuses on the brand’s heritage.

“I have designed over 200,000 jewels in my life. Which is the most interesting or beautiful? Which represents me the most?” Gianmaria Buccellati, 85, said as he unveiled the exhibition in the Tuscan city last Tuesday.

“I cannot say. It would be like asking a mother which child she prefers,” he told AFP, his voice cracking with emotion. Each of the pieces on show is unique and was designed as part of his personal collection, not to be sold.

For popes and princesses

Gianmaria came up with the idea in 1968 when he saw the collection of Lorenzo il Magnifico — a member of the powerful and immensely wealthy Medici family — who in the 15th-century boasted an impressive assortment of amber, ivory, sapphire and diamond chalices, medals as well as rings.

“Gianmaria began to design chalices for his own pleasure, to be presented to the world for all to enjoy,” said Gianfranco Grimaldi, vice president of the Gianmaria Buccellati foundation which owns the collection.

“His latest example is the rock crystal and gold Coppa Florentia, made this year to honour the city of Florence, which has 2,024 stones, including tsavorite and coloured sapphires,” he said.

Dazzling viewers at the show’s entrance is a 1929 tiara made by Mario. It was worn by Italian nobility and features 570 diamonds.

The Milanese master once made a silver Madonna for Pope Pius XII to give as a present to Britain’s Princess Margaret, Queen Elizabeth II’s sister.

And among his most prized works here are silver goblets, based on 1st-century relics found at Pompeii, and vases engraved with the 12 labours of Hercules.

“An exhibition of precious jewels and artefacts is always a challenge because you can easily end up comparing the antique and contemporary, putting the contemporary at a disadvantage,” said art historian Cristina Acidini.

“In this case the comparison holds up. It’s a rare exhibition, perhaps one in a million,” she said. The Treasures of the Buccellati Foundation runs until Feb 22. — AFP 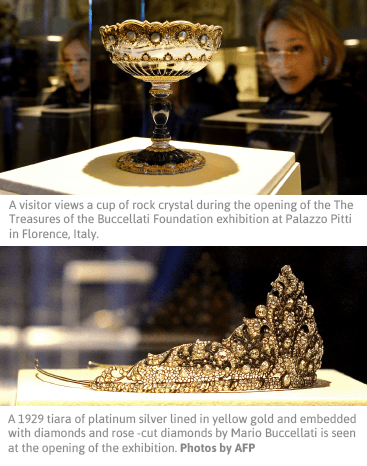