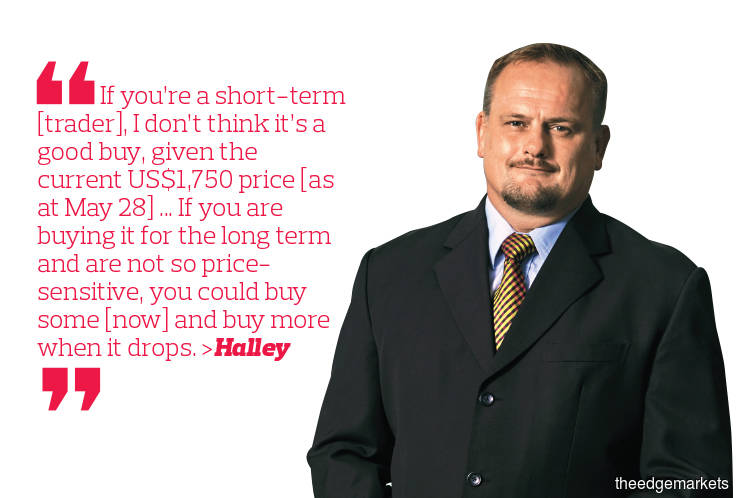 Gold prices are expected to rise in the longer term if the US Federal Reserve continues to ease its monetary policy to combat the Covid-19 outbreak. Those looking to profit from it in the short term, ­however, should practise caution, as the price of the yellow metal is near its multi-year highs and currently volatile, say industry experts.

Jeffrey Halley, senior market analyst at US-based foreign exchange company OANDA, says the price of gold could climb higher if the Fed were to further ease its monetary policy. It would also mean inflation, which has been low in developed countries such as the US, could creep up once again when markets are flooded with easy money.

The ongoing US-China trade war would also contribute to a higher inflation rate globally. For instance, a country’s cost of goods and services would rise if the US were to push further for US companies to move their production lines out of China.

“Such a scenario is likely to play out over the longer term,” Halley says.

The price of gold showed a strong resistance level at US$1,750 an ounce (as at May 28), he says. “[The week before this], gold prices tested this level four times, but didn’t cross it. It also didn’t pull back. It shows that a lot of traders are putting long expectations on gold and expect its price to move up rapidly to US$1,800.”

In the shorter term, Halley says the price of gold could fall to US$1,650 an ounce as market players react to the news that various countries, including Japan and Australia, have either lifted their state of emergency or are easing lockdown rules meant to contain the Covid-19 outbreak. Markets also responded positively to the news that a vaccine to treat the virus could be available soon.

“That is why we are seeing a rally in risk assets such as emerging market stocks and funds rotating out from safe haven assets like gold,” he says.

Halley doubts, however, that the global economy can recover quickly from the Covid-19 outbreak, although the market seems to be increasingly positive about such a prospect.

“The markets believe what they want to believe. For me, however, I have been talking about the danger of this bull market trap [in which markets would fall again based on subsequent negative news].

“I have serious doubts about the recovery of the global economy, especially the US. The country has been so badly managed during the virus outbreak and it has lost 20 million jobs. The market seems to have overlooked such a fact,” he says.

Is it time to buy gold now, then? Halley says it depends on the investor’s time horizon. “If you’re a short-term [trader], I don’t think it’s a good buy, given the current US$1,750 price [as at May 28] ... If you are buying it for the long term and are not so price-sensitive, you could buy some [now] and buy more when it drops.”

Liew Kim Fung, chief trader at Ace Innovate Asia Bhd, a Leading Entrepreneur Accelerator Platform (LEAP)-listed company that does gold bullion trading, says over the longer term, some investors are expecting the gold price to surpass US$1,800 an ounce. It could even hit US$1,900 on the back of further monetary policy easing by the Fed.

“Such a scenario also happened in 2011 when the Fed cut rates aggressively to keep the US economy growing and gold prices kept going up to hit a [record] high,” he says. Liew says investors who want to enter the gold market now should be cautious. “There is potential for the gold price to climb higher. From a long-term perspective, however, it is already very high. You will see a lot of profit-taking when it hits a certain level, that is for sure.”

He adds that the gold market is very volatile and could move within a price range-bound of US$50 to US$150. “At other times, it is usually US$5 to US$15.”

Chong Lee Choo, director of the innovation lab and alternative investments at Affin Hwang Asset Management, says: “We do not think that one should be chasing after the price of gold, given how much it has rallied. But we do believe investors should consider investing in gold as a long-term diversifier.

“Market volatility is likely to persist, owing to the Covid-19 outbreak. Geopolitical tension has also picked up recently. All this may trigger a selloff in risk assets, and investors who have gold exposure in their portfolio would suffer from fewer losses,” she says.

Chong Lee Choo (pictured), director of the innovation lab and alternative investments at Affin Hwang Asset Management, says local investors have been actively trading gold in the past year. “In the past 12 months (as at May 28), the average monthly trading volume for the ETF made up about one-third of the entire ETF market trades.

“Since January, we have also seen a steady increase in the trading volume for the ETF and the volume peaked in the subsequent month,” she says.

The ETF market makers have created more units to be traded in the secondary market, as demand for the product has outweighed supply, she adds.

Chong says, however, that the trading volume for the ETF is still low relative to the volumes normally traded for stocks in general. The inflows of funds into the ETF have also been much lower than other similar ETFs listed in other countries.

A key reason is the lack of awareness of the ETF among local investors, while others are concerned about liquidity.

“Some may be worried about liquidity, given its low trading volume. However, our appointed market makers have continued to play a pivotal role in ensuring the TradePlus Shariah Gold Tracker is liquid. Investors are constantly provided with a bid and ask price to trade their units throughout the trading hours,” she says, adding that the buy and sell spread is usually about 1%.

Chong says the ETF will continue to provide investors with exposure to gold and it will remain relevant to them amid high market volatility and economic uncertainty.