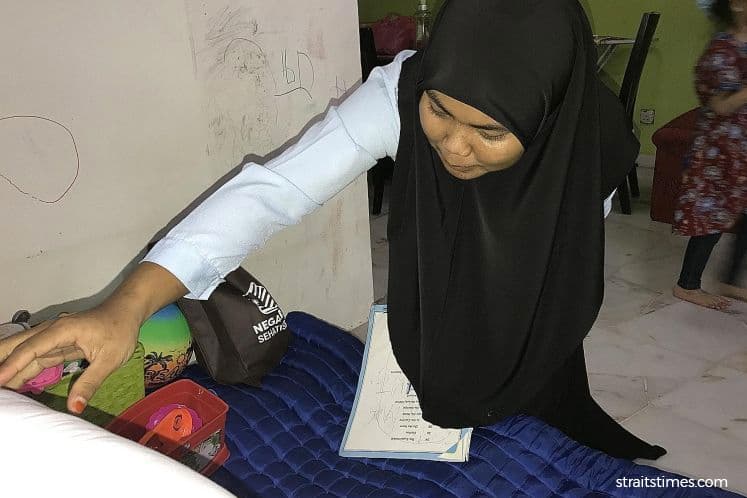 When Ms Nor Asma Arifin graduated with a diploma in accounting, the fifth of 10 children thought she was on the way out of poverty. But the 21-year-old from Dungun, Terengganu, spent a year looking for a job after graduation with no luck.

Desperate to survive, she then took up whatever job was available, including a position as a supermarket cashier, with a nett pay of only RM800 (S$257) a month.

"But that was still not enough for me to last until the next pay cheque," said Ms Nor Asma, who also had to help support her parents, who do odd jobs in their kampung.

"So when I saw an advertisement by My Local Maid looking for Malaysian women to work as domestic maids - with a minimum nett pay of RM1,000 and paid leave - I thought I should give it a shot," she told The Straits Times.

While most of Malaysia's some 250,000 registered maids are predominantly from neighbouring states like Indonesia or the Philippines, at least one business - My Local Maid (MLM) - has been set up to supply Malaysian domestic workers.

Lawyer Wan Roslan Wan Othman, 43, and his friends came up with the idea of the business.

"We feel that coming up with MLM is a pragmatic way to deal with the problem of unemployment among women in Malaysia," he said.

While a breakdown of the unemployment rate of women in Malaysia is not available, he has come across many women struggling to make a living.

Mr Wan Roslan, who often gives out donations to poor villagers in his hometown in Terengganu, observed that the items always ran out before all families were covered.

He said: "I have noticed that many families struggle to make ends meet, especially women who are left with their children by their spouses.

"Some of them earn less than a few ringgit a day from doing odd jobs, just enough to buy them a meal. They would just drink water for the rest of the day. It breaks my heart because there is only so much that I can do to help them financially."

POSITION OPEN TO ALL

All women are welcome at My Local Maid, from the homeless to graduates, as long as they are healthy and can perform the stipulated duties as a maid.

Mr Wan Roslan said the business has so far received between 60 and 70 applications from employers and placed more than 20 Malaysian maids nationwide.

While more than 40 women have signed up, some of them failed the test. The women who signed up are between 20 and 45 years old.

With the proportion of jobless fresh graduates in Malaysia rising - the unemployment rate of this group went up from 30 per cent in 2013 to 34 per cent last year - there was even a degree holder who applied to be a maid.

However, she turned down the job later because of the pay.

While their pay is similar to that of foreign maids, hiring a Malaysian maid is cheaper as employers do not have to foot the bill for various permits or licences.

Employers pay around RM5,000 to MLM for the maids' tests, training and transportation.

Applicants have to undergo a thorough medical check-up - including pregnancy, HIV and drug tests - before being trained.

"Training them is important because not all of them know how to operate household appliances," he said, adding that the majority of employers and maids are from Terengganu and Kelantan.

"Under the contract, employers are also required to provide a 60-day paid leave and 14 days' sick leave for the maid," he said. The paid leave includes days off during weekends.

He said if a maid runs away or commits theft, the employer can file a police report or get in touch with the maid's family.

"A maid is replaceable within the first 30 days with no charge if her employer is not happy with her but after that, it is between the maid and her employer. Salaries are paid directly to the maid," he said.

After being jobless for a year, Ms Nor Asma is now working as a maid for a family in Petaling Jaya, Selangor.

Initially, she said she took some time to think about signing up to be a maid as she was not sure if she could live in a new place with strangers. She decided to give it a try and has been working for two months since.

She said: "There's not much difference from living in my parents' home. I wake up at 5am and start tidying up the house before making breakfast. The best part is, food and shelter are well taken care of, and the perks are great."

Her employer, senior producer Ahmad Fedtri Yahya, 36, said hiring her was one of the best decisions he and his wife have ever made.

Ms Nor Asma helps care for their three children and does household chores.

Mr Ahmad Fedtri had considered hiring an Indonesian maid but he decided against it.

He said: "There is no hassle involved in hiring Nor Asma because there's no language barrier and she doesn't need a work permit. It would also be easier for us to travel should we need to take her along."

Asked if she sees herself working as a domestic helper in the long run, Ms Nor Asma said: "I'm very grateful to have a job after spending a year looking for one. It's too early to say whether I see myself doing this (working as a maid) for long so we'll see how things go."