Eggs and chicken are among the cheapest and most widely consumed protein staples in Malaysia and fortunately, prices have not yet been affected by the depreciating ringgit.

However, it may be only a matter of time.

Malaysia imports all its corn and soybean meal — two key ingredients that make up almost 80% of poultry feed — in US dollars. In fact, less than 10% of feed ingredients can be sourced locally.

The only reason chicken and egg prices haven’t shot up yet is because the US has enjoyed a bumper season. For the most part, this has offset the 30% decline in the ringgit over the past 12 months.

But corn and soybean meal are notoriously volatile commodities. All it takes is a spell of bad weather in the producing countries to send corn and soybean meal prices rocketing. And with no reprieve in sight for the weakening ringgit, poultry farmers and Malaysian consumers alike are completely exposed to the risk.

“Compared with a year ago, corn and soybean meal prices have fallen. But because of the sharp fall in the ringgit, prices have actually increased marginally for us,” says one feed miller.

By weight, corn makes up 50% to 55% of poultry feed and soybean meal, 25%. Soybean meal is the by-product of crushing soybeans to extract the oil.

“If not for the fall in corn and soybean prices, the poultry industry would be in much worse shape. Other ingredients for the feed that have to be imported have already seen price increases. Prices of feed supplements like vitamins, minerals and enzymes have already gone up 30%,” says one industry player.

Feed supplements may only constitute less than 2% of the feed mix but they easily make up 10% of feed costs.

Moving forward, all eyes will be on the US’ corn and soybean production. The US is the world’s largest corn producer and second largest soybean producer. Brazil produced the most soybean last year.

Corn and soybean prices are only slightly higher than their five-year lows — 323 US cents per bushel of corn and US$276.9 per tonne of soybean meal. However, the prices can change very quickly as both corn and soybean are highly commoditised and prone to speculation.

That said, the US Department of Agriculture (USDA) has been relatively positive on corn and soybean production this year.

It forecasts American growers will produce 13.7 billion bushels of corn this year, the third largest production on record, despite a 4% drop in production last year.

“Growers in the eastern part of the Corn Belt were hampered by wet conditions throughout spring and the early part of summer this year. The rest of the region’s states experienced favourable conditions,” states the USDA in a report. It notes that 70% of US corn was reported to be in good or excellent condition.

At the same time, the department anticipates the soybean harvest this year to be the second highest on record, at 3.92 billion bushels, albeit 1% lower than last year.

However, when it comes to crops, nothing is ever certain until harvest time and all eyes will be on the upcoming crop production report by the National Agriculture Statistics Service, which should be released on Sept 11.

“When it comes to corn and soybean, demand is relatively stable. The slowdown in China may be easing demand a little, but as developing countries become more affluent, people will eat more meat, which will drive demand for feed. Hence, it all comes down to supply and, therefore, the weather,” explains one industry player.

If corn and soybean prices do shoot up, there will be little the government can do to keep egg and poultry prices in check.

“There are virtually no local substitutes for poultry feed. The government has looked into this before, but there is no solution. Palm kernel could be used for cow feed but it isn’t suitable for chickens,” says a feed miller.

Malaysia cannot even shed its reliance on imported corn and soybean as yields would be too low to justify growing these crops locally. The only feed ingredients that are produced locally would be palm oil and rice bran, but these only make up 6% of the feed at most.

In contrast, countries like Indonesia, Thailand and the Philippines are able to produce some amount of their corn locally. Indonesia, for example, recently tightened import restrictions on corn to encourage more farmers to use locally produced corn, which will in turn encourage more planting.

Malaysia can’t hoard corn supplies when prices are low either as the local climate is not ideal for storing the commodity. Apart from the lack of storage infrastructure, the heat and humidity ensure that corn is easily damaged by mould, for example.

Industry players estimate that the country will have two months’ worth of corn and soybean meal at any given time. This increases our reliance on the spot and short-term futures market for both commodities.

“Previously, when the ringgit was stable, traders were able to buy corn and soybean meal in US dollars and sell to farmers in ringgit, while managing the exchange rate risk. But earlier this year, many traders have already got their fingers burnt when the ringgit fell. Today, most traders require contract terms to be in US dollars. Otherwise, they want cash settlement,” says the feed miller.

“Some of the smaller farmers may still deal with traders in ringgit terms, but then, the traders will price in the foreign currency risk. And with the way the ringgit is moving, that risk is very expensive, and farmers have to pay for it.”

One route that the government can take would be to impose price ceilings. While it may be an unpopular decision with poultry farmers, it would be one way to keep the prices of necessities in check.

After all, the government in the past had imposed such price ceilings on eggs and poultry.

“There is no reason for the government to impose price controls. The poultry industry is one of the most competitive in the country. Just because costs go up does not mean that they can easily be passed on to consumers. The farmers themselves will have to absorb some of them,” says one industry veteran.

He points out that the demand for eggs and poultry tends to be relatively stable and on an upward trend. On the supply side however, the industry as a whole tends to be in overcapacity most of the time, making it difficult for farmers to dictate prices.

“It is relatively easy to expand capacity but it is difficult to monitor what the competition is doing. Because margins are thin, everyone is going for volume to expand. But when everyone goes for volume, prices get pushed down,” says one industry player.

Interestingly, over the past 10 years, the price of grade A eggs has risen 27% to 30 sen each. That works out to a compound annual growth rate (CAGR) of 2.5%. Meanwhile, chicken broiler meat has seen prices increase by even less, around 15% in the same period to about RM4.50 per kg, or 1.44% CAGR.

Hence, government price controls aside, a sudden increase in feed prices will likely be difficult for farmers to pass on to consumers immediately.

At the same time, it is important to note that farmers can trim their capacity very quickly if a crisis does arise. Layer hens are typically kept for 70 to 80 weeks. All farmers would need to do is to cull their older laying hens and sell them as broiler meat.

Smaller farmers with higher costs will come under pressure while the big boys may not ease production in order to gain more market share, explains the industry player.

Looking ahead, the earnings of poultry players like Huat Lai Resources Bhd, Lay Hong Bhd, Teo Seng Capital Bhd and QL Resources Bhd may become more volatile, depending on their ability to pass the costs to consumers.

The most recent earnings season — the quarter ended June 30 — showed mixed results by the four poultry farmers. QL Resources (fundamental: 1.30; valuation: 1.10), at least, is sufficiently diversified, so it will not be so badly affected.

Against this backdrop, the wild card for the industry will be how the government will react to a sudden increase in basic food prices at a time when the public is already grappling with rising inflation. 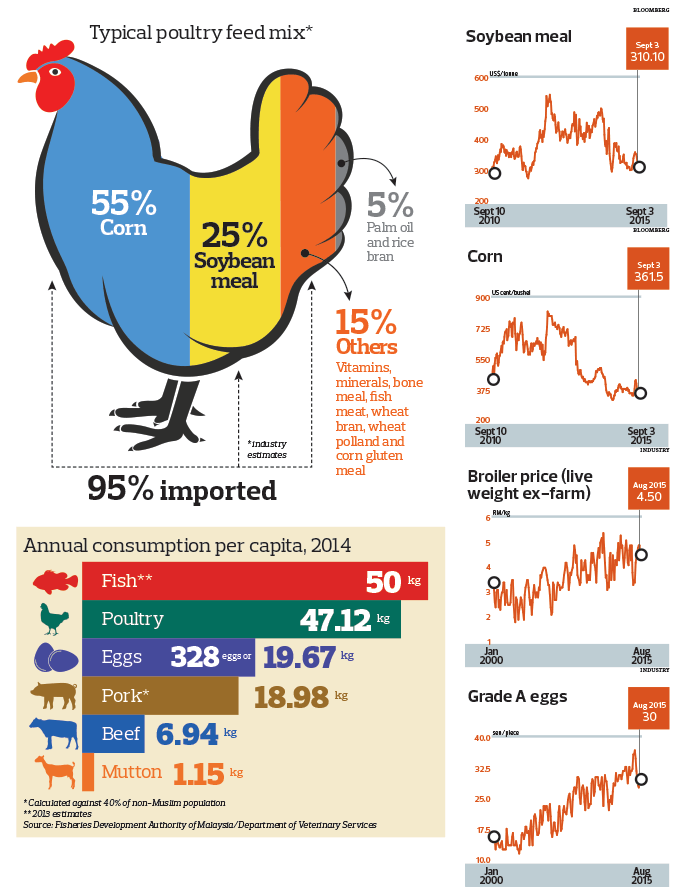