NCB Holdings Bhd
(Nov 28, RM2.54)
With a target price (TP) of RM 1.83 under review, MISC Bhd announced that it had entered into an agreement for sale and purchase of shares with MMC Ventures Sdn Bhd (MMCV) and MMC Corp Bhd for the disposal of a 15.7% equity interest held by MISC in NCB Holdings, comprising 74 million ordinary shares for a total cash consideration of RM222 million on the basis of off-market direct business transaction.

The deal amounts to RM3 a share, which is at 14.1% premium to NCB’s last closing price. This is also implying approximately 1 times price-to-book value (PBV) based on latest book value per share of RM3/share.

The disposal is consistent with MISC’s intention to divest its non-core, non-energy related investments.

In the past two years, the group has exited from its struggling liner shipping business and integrated logistics business.

The deal, in our opinion is mildly positive for NCB given that the offer price by MMC is at a premium to its last closing price, signalling the buyer’s positive outlook on NCB.

However, no earnings impact will arise from the deal.

Post the completion of the deal, MMC will emerge as a substantial shareholder of NCB but the question of the extent of the emergence of new shareholder adding value to the company remains as they are still not able to influence the future strategic direction of NCB given that they will not be the largest shareholder.

The ultimate intention of MMC remains unclear to us for the moment. Given that the group also owns several port assets namely Port of Tanjung Pelepas (PTP) and Johor Port, we do not discount the possibility of injection of MMC’s port assets into NCB. This could be a positive catalyst for NCB with potential synergies to be realised between NCB and PTP due to their different client base.

In addition to the completed Wharf 8A, upgrading works on Wharf 8 will soon be initiated to cater for larger container ships owned by larger shipping lines. This could potentially unlock the full potential of Wharf 8 and 8A to cater for transhipment cargoes. Notwithstanding, we remain cautious about the container throughput growth outlook in the near term. We maintain our earnings forecast and assumptions. Rating is under review pending more clarification. Our earlier TP was RM1.83 — Kenanga Research,  Nov 28 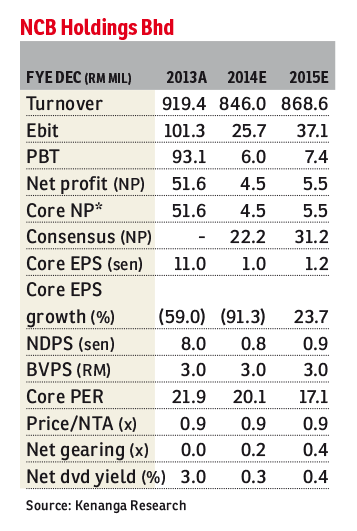