Possible hiccup but Maybank is top pick of sector

Malayan Banking Bhd
(Jan 7, RM8.61)
Maintain “add” with a target price (TP) of RM12.50: The market is concerned about Malayan Banking Bhd’s (Maybank) exposure to 1Malaysia Development Bhd (1MDB) as the local press reported that 1MDB failed to pay a RM2 billion loan due on Dec 31, 2014.

We gather that Maybank’s loan exposure to 1MDB could amount to RM5.5 billion.

However, the above risks would be reduced by the government’s guarantee and 1MDB’s listing plans.

Our dividend discount model-based TP (cost of equity of 9.7%, long-term growth of 4%) is intact.

Despite this possible hiccup, Maybank remains an “add” and our top pick for the sector, as it would benefit from the expected improvement in the Indonesian operating environment and regional expansion drive.

The Edge Financial Daily quoted sources stating that 1MDB failed (for the second time) to pay a RM2 billion loan to local lenders due on Dec 31, 2014.

Maybank and RHB Capital Bhd are the lead lenders. We contacted Maybank’s management for comment on the above but it declined to disclose any details of its 1MDB loans banking secrecy under the Banking and Financial Institutions Act 1989 (Bafia).

However, we gathered from The Star article that Maybank’s loan exposure to 1MDB totals RM5.5 billion.

We estimate that a 10% provision for the loans would increase Maybank’s credit costs by RM550 million and reduce its FY15 net profit by 5.6%.

In the worst-case scenario, a full impairment of the loans would slash Maybank’s FY15 net profit by 56% and lower our TP by around 44 sen to RM12.06.

However, we take comfort in the fact that Maybank’s exposure to 1MDB is guaranteed by the government of Abu Dhabi (United Arab Emirates).

Furthermore, the loans would be settled if the 1MDB initial public offering (IPO) is successfully implemented this year. Hence, we do not see a high likelihood of full impairment for the loans.

Stay invested in Maybank, given its bright regional growth prospects in the longer term, especially in Indonesia.

We think that the risk of possible provisions from its exposure to 1MDB would be reduced by the government’s guarantee and its IPO plans.

Any weakness in share price from the concerns would be a buying opportunity, in our view. — CIMB Investment Bank, Jan 7. 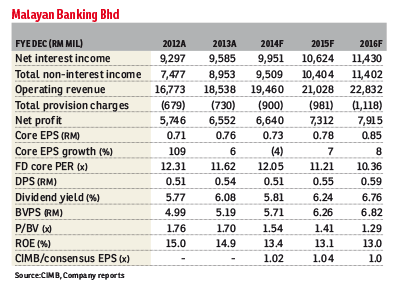