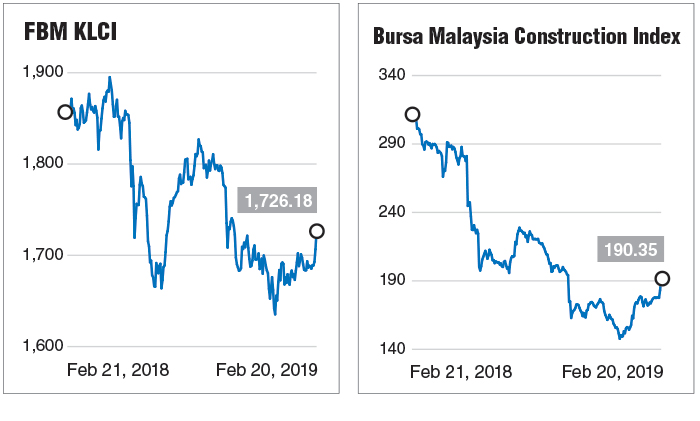 The current upward momentum is expected to continue on the local bourse for a while until any external shocks take centre stage again, according to analysts contacted.

Share prices, particularly the mid- and small-cap stocks, have been at multi-year lows for long, said a fund manager, and just some positive news is needed to give buying impetus for investors to hunt for bargains.

Inter-Pacific Securities research head Pong Teng Siew said local funds were reacting to news that Malaysia and China could come close to an agreement in the reinstatement of the ECRL project, which immediately drew attention back to the construction sector.

“This is probably driven by the development that Malaysia and China would come to some kind of agreement which will be a big boost to the construction sector,” said Pong.

“I see no signs that it (KLCI) has exhausted or close to be exhausted. In fact, we haven’t been seeing great corporate earnings being reported. Notwithstanding that, the market has managed to climb,” he said, adding that this shows some forms of optimism and confidence from the market.

The construction index grew 6.74 points or 3.68% to 189.93, making it the top gainer in percentage terms among the bourse's indices.

However, he noted external shocks could be the speed bumps for the market rally, for instance the trade talks between China and the US and the degree of the slowdown in the Chinese economy.

Mohd Redza said the KLCI has gained more than 2% in the past three trading days fuelled by the rise of companies related to commodities, as oil price climbed up to US$66 (RM268.52) per barrel for Brent and crude palm oil prices still holding strong at above RM2,100 per tonne, as well as a stronger ringgit.

“Tomorrow (today), I’m anticipating it (KLCI) to be strong, but if there’s a double-digit point gain tomorrow (today) … then we should see a profit-taking happening,” said Soo.

He noted that the index will likely pause at the 1,740 level based on his reading of the charts. Thus, he does not exclude the possibility of another double-digit gain in points today.

“But, I will be cautious as there is only some 14 points to this level, and we could likely see some profit-taking after (a) bullish momentum from these two days,” Soo said, noting 1,700 points as the new support level for now.

Moving forward, Soo noted that the oil and gas and construction sectors should climb further, noting that many of these stocks have been pushed to the oversold zone.