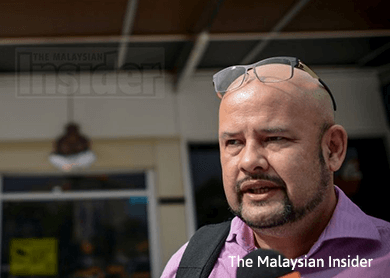 MCMC monitoring and enforcement division head Zulkarnain Mohd Yasin said the agency managed to get in touch with the site administrator and asked for the photographs to be removed.

"We contacted them in the morning and by 4pm most of the celebrity's photographs were removed from the site. We are still monitoring the situation."

This was also confirmed by Harith himself, who wrote on his Facebook page: "Update: the pictures of my son (and other children) have been taken down off the pornographic website (which originates from outside Malaysia). Thank you SKMM/MCMC for their swift response and assistance in making this happen."

Zulkarnain told The Malaysian Insider that the site operated outside Malaysia, although some of the posts and advertisements were in the Malay language.

Further checks conducted on the website showed that it also promote online gambling.

"It also a potential breeding ground for scammers, in particular love (romance) scams.

"The site also contains advertisements that could be in breach of other Malaysian laws.”

"Pornography website operators will recognise citizens' rights to their own images."

Another step that the individual could take is by lodging a report with MCMC, he added.

MCMC has so far received 30 complaints of theft and abuse of personal photographs online.

"Twenty were reported last year while 10 were since January this year on the unauthorised spreading of obscene photos and/or videos of complainants," he said.

The Malaysian Insider earlier reported that police acknowledged difficulties in solving the theft and abuse of personal photos used on pornography sites due to the lack of solid evidence to link suspected perpetrators with the crime.

He said the authorities would try to contact the site administrator to remove offensive images, but not all would comply, more so if they are located overseas.

Harith today lodged a police report at the Taman Tun Dr Ismail police station over photos of him cradling his toddler appeared on a website alongside pornographic pictures.

“This is not the last you will hear from me on this matter – it has spurred me to take active steps into doing whatever I can do to tackle this issue. Children are a blessing from The Almighty and should never EVER be exposed to abuse," he wrote. – The Malaysian Insider