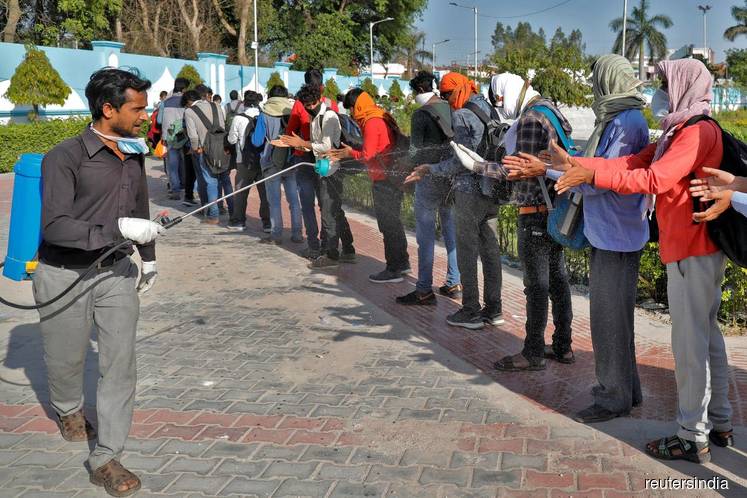 KUALA LUMPUR/NEW DELHI (April 7)(Thomson Reuters Foundation): Poor workers have been arrested and beaten by police for trying to put food on the table during coronavirus lockdowns, prompting warnings on Tuesday of social upheaval if aid is not delivered.

In Malaysia, two men who usually earn about 100 ringgit (US$23) a day fixing roofs have been jailed for three months after they were caught fishing for food in violation of an official stay-home order, sparking a public outcry.

"Police told them to leave. They said they have to fish to feed their family — they don't have a job now, they have no money," said their lawyer Balakrishna Balaravi Pillai, adding the men were jailed because they could not afford to pay a fine.

"They have been hit hard not only due to the economic factor, but now also got trapped and entangled in such a legal quagmire," Pillai, who is giving the men free legal assistance, told the Thomson Reuters Foundation by phone.

Labour rights activists across Asia have criticised strict lockdowns to contain the flu-like virus - which has infected about 1.3 million people and caused more than 70,000 deaths globally — for their impact on vulnerable workers.

Social media has been flooded with videos of baton-wielding police in India beating people, including migrant workers and rickshaw pullers, for breaking a three-week lockdown, as well as making them do squats and deflating their tyres.

Raju, a vegetable vendor in New Delhi, said a policeman struck him on his back and calves repeatedly — despite his attempts to explain that selling food was an essential service exempted from lockdown rules.

"He would not listen. He just kept beating me. So, I quickly turned around and limped back home," said the vendor who declined to give his full name. "My bruises are still visible."

Modi asked the nation's poor for forgiveness for the hardship caused by the lockdown, after it began on March 25, when the government also announced a US$22.6 billion economic stimulus plan to provide cash and food handouts to the poor.

"They would rather catch the virus outside than dying from hunger at home," said Gloria Arellano, the charity's chairwoman.

"There are people who are just drinking water to survive. We will see more urban poor, this is already happening."

President Rodrigo Duterte warned violators of coronavirus lockdown measures last week that they could be shot for causing trouble, after media reports of protests in Manila about insufficient government food aid.

Curfew violators have been confined to dog cages and made to sit under the midday sun as punishment, advocacy group Human Rights Watch said.

Its researcher Carlos Conde said government measures like cash subsidies to cushion the blow were inadequate for many low-income and informal workers who have no savings or insurance.

"These daily wage earners and their families, they live a hand-to-mouth existence," Conde said from Manila.

"The government is facing social upheavals like this if they do not meet the needs of poor Filipinos, particularly if they continue to arrest and lock up those who are out on the streets to find food," he added in emailed comments.

The United Nations has warned the coronavirus pandemic could trigger a global economic crisis, destroying up to 25 million jobs if governments do not shield workers from the impact.