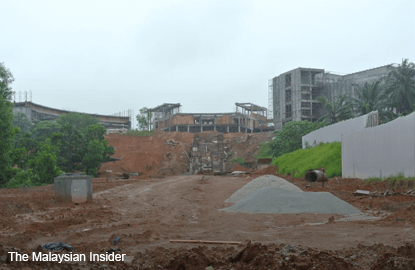 (Nov 23): Putrajaya did not get the “best value for money” in the construction of the contentious National Defence Education Centre (Puspahanas) which is still not ready, said the third and final series of the 2014 Auditor-General's Report.

It identified three reasons why Putrajaya was not getting value for money in the Umno-linked project which was supposed to be ready four years ago.

One weakness was the delay in construction by 282 days as of July 29, 2015, when an audit visit was made, due to the contractor's poor performance.

Land devaluation on the project’s site in Precinct 1, Putrajaya, also caused the government to bear RM26.87 million in costs, the report said.

The project attracted controversy after it was awarded to AMSB in 2005, the company owned by Selangor Umno leader, Datuk Raja Ropiaah Abdullah.

AMSB was allegedly awarded the project in exchange for 80 ha of land in Bukit Raja, Selangor and RM27 million.

According to the report, the project was approved by the Cabinet on June 27, 1991 and the implementing agency was the Defence Ministry’s defence engineering services division (DESD).

In February 1997, the Cabinet approved in principle that the project would be carried out by AMSB.

In the report, the A-G recommended that the ministry ensure the capability of the appointed contractors so that the project could be completed on time, and that contracts be properly awarded and monitored. – The Malaysian Insider