Politics and Policy: For Pakatan Harapan Plus, the biggest decision has yet to be made 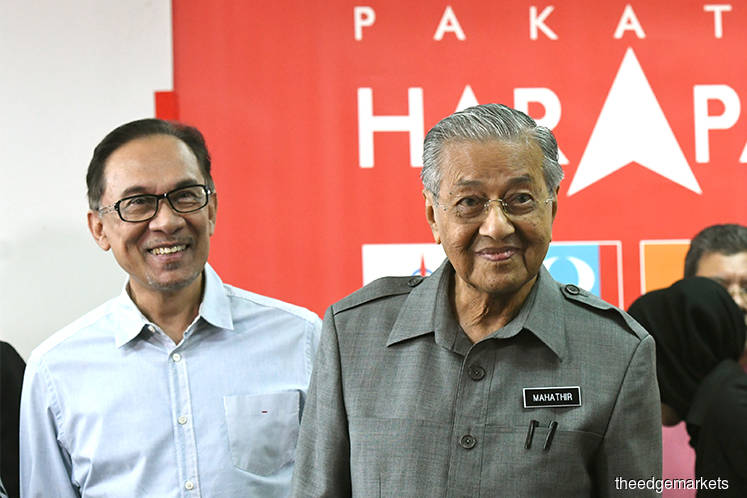 DATUK Seri Anwar Ibrahim, the current leader of Pakatan Harapan, is “cautiously confident” of being named the coalition’s candidate for the post of prime minister in the event Pakatan Harapan is returned to federal power.

Tun Dr Mahathir Mohamad, the former Pakatan Harapan leader, is on record as saying that he is not offering himself to be prime minister for the third time.

And both say they have no personal problems with each other.

Such remarks should have easily answered the big question as to who would be Pakatan Harapan’s candidate for prime minister, but it has not.

We are now told it is still a work in progress and another meeting is to be held this week to discuss the issue. That puts a damper on last week’s meeting of Pakatan Harapan Plus when the impression given was that a consensus had been reached. Pakatan Harapan Plus is the moniker for Pakatan Harapan and its allies — Mahathir’s side of Bersatu and Warisan.

The June 9 meeting was held at PKR headquarters and it was only the second time Mahathir had stepped into the premises. In the words of a political observer, “Mahathir stepping into Anwar’s den, aka the PKR HQ, must have boosted the morale of Pakatan Harapan Plus leaders.”

The Mahathir-anointed Bersatu secretary-general Datuk Marzuki Yahya told the media at the end of the three-hour meeting that a “consensus has been reached over the PM candidate issue”.

But a Pakatan Harapan source said “that one is not the official position”. Another source says the meeting was “inconclusive”. As I see it, one should not expect an issue as big as the PM’s candidacy to be resolved within three hours in one meeting. What more when we take into consideration the so-called love-hate relationship between Mahathir and Anwar.

And it is easy to understand why DAP strategist Liew Chin Tong has said openly a number of times that it is critical that Anwar and Mahathir join forces again as this time around, the opponent is even bigger. Surely, both leaders know this.

“We need both as there is a larger opponent of (Tan Sri) Muhyiddin Yassin and (Datuk Seri) Najib Razak,” said Liew during a recent webinar.

The political observer concurs, saying that “clearly Pakatan Harapan Plus needs to ride on the pre-GE14 wave if it has any hope to regain power”. And key to that, he says, is Anwar and Mahathir working together again and the removal of all doubts regarding the prime minister’s post.

It is no big secret that supporters of Anwar and Mahathir want their man for the top post. And Mahathir, despite saying that he is not offering himself for the PM’s post, has also said that “if I can be of service or people think I can be of service, I am available”. Some people have their own interpretation on that.

But, according to the observer, everybody knows the importance of the Anwar-Mahathir combo working together and “indications are, Pakatan Harapan Plus recognises this need and will formalise the PM issue at its next meeting”.

However, he adds that “the question of who becomes prime minister also unravels the vital question of whether Pakatan Harapan Plus has the numbers to retake Putrajaya”.

Mahathir is downplaying the numbers game, claiming he does not know if he has the numbers to take back power from the Perikatan Nasional government. At a recent press conference, he said “numbers keep on appearing and disappearing. We don’t know.” That could be a reference to negotiations among lawmakers.

However, Mahathir also said “what we do know is at the time Muhyiddin was sworn in, he did not have the numbers”.

Anwar is also downplaying talk of Pakatan Harapan having the numbers. Speaking during a Facebook live session recently, he said it has a total of 107 parliamentary seats.

With Pakatan Harapan Plus believed by many to have secured at least 129 seats in Parliament, the figure cited by Anwar raised many an eyebrow. As a result, his office was flooded with questions from the public, presumably from the coalition’s supporters or those who had voted them in during GE14.

So much so that Anwar’s office came up with a statement to clarify that what he said was based on “the number of those representing each party during the PH meeting with Bersatu and Warisan on June 9 and has not yet taken into account the number of independent MPs or others absent from the meeting”.

In fact, during the Facebook live session, Anwar also said “we will move forward as a team to ensure that the people’s mandate is respected and all the damage, chaos and corruption are put to a stop”.

He did not say how, nor did he reveal who he meant by “we”. Could it be Pakatan Harapan Plus and others? During an exclusive interview with Malaysiakini a few days ago, Anwar said that under the Perikatan Nasional government, there is now an absence of checks and balances and “this necessitates change before GE15”.

Says the political observer, the crux of the matter is “a comfortable number that will negate the need to call for fresh elections”.

Wishful thinking, myth or reality, come this week’s meeting, Pakatan Harapan Plus must decide who they want to present to the nation as its prime minister if it governs again.