Police say no to Sept 16 rally on security grounds 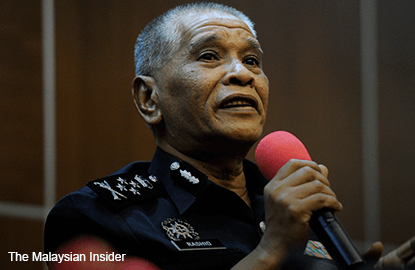 The red-shirt rally or “Himpunan Rakyat Bersatu” has been promoted as a demonstration to “counter” the recent Bersih 4 rally, which had called for Prime Minister Datuk Seri Najib Razak’s resignation over alleged financial scandals.

The red shirts’ gathering is also being held to express anger over a footage of Bersih 4 participants stomping on pictures of Najib and PAS president Datuk Seri Abdul Hadi Awang.

Noor Rashid said he was not sure if the rally organisers had sent the police any notice about holding the event.

“But we don’t allow this rally because of security implications,” he told reporters in Penang yesterday.

“First of all, all assemblies must notify police and get permission from the owner of the premises or owner of the area. Without [the owner’s] permission, police cannot give approval.

“So it becomes an assembly that is against the law.

“If this assembly goes on, we will make sure that they will not vandalise any property or disturb anyone else having any activities there.

“After the rally, we will investigate and then will take the appropriate action,” he added.

According to Bernama, news of the rally, scheduled to be held in Kuala Lumpur, has gone viral through instant messaging and social media.

Participants of the 12-hour rally, from noon onwards on Sept 16, are supposed to don red shirts.

She questioned the organiser’s intention and said Sept 16, which is Malaysia Day, should see Malaysians united in diversity, adding that the planned rally “goes totally contrary to that”.

She said it could create chasms and divisiveness and suggested that the Malays organise prayer sessions to save the country instead of a rally.

Umno minister Datuk Seri Ismail Sabri Yaakob said he would send members to join the rally in his capacity as the Bera Umno division chief, according to The Star Online.

Ismail Sabri has gained notoriety in recent months over his calls for Malays to boycott Chinese traders and his proposals for a Malay-only “Low Yat 2” electronics mall.